The Tamron 150-600mm lens in Nikon mount has been incredibly popular since its announcement.  For months it couldn't be kept in stock.

The reason that the lens is so popular is because it's the first high quality supertelephoto lens that has been offered at a good price. Other lenses, like the Bigma (Sigma 150-500), have always been far more of a compromise in image quality.

WHAT YOU NEED TO KNOW

The Tamron 150-600mm is awesome.  Seriously, I'm impressed and I've reviewed enough lenses that I don't get impressed very often.

I've always enjoyed wildlife photography and frequently rent the “big boy” supertelephoto lenses to shoot in Yellowstone, but those lenses cost $10,000 and up, so I've never gotten into it seriously because it was out of my reach.  I've tested many of the cheap supertelephoto lenses and just couldn't get over the lack of sharpness.

Despite my excitement over this lens, I also need to burst a few bubbles if you are expecting too much.  The focus is slow, and you won't be able to shoot in early morning or late evening light due to the very slow aperture.

Also, there is competition on the horizon.  Sigma has released their competitor to this lens, which looks quite attractive as well, though it is more expensive and a lot heavier with very similar image quality.

That being said, if you've considered dabbling in wildlife photography but haven't found a supertele at a reasonable price–look no further.

Sharpness:  I had heard this lens was quite sharp before purchasing it, but “sharp” is a moving standard.  My question was if it is sharp enough to see all the individual hairs on feathers when I shoot birds.  To me, that’s the standard of “sharp” for a wildlife lens.

I was  pleasantly surprised by the sharpness of the Tamron 150-500mm.  It exceeded my expectations.

But if you realize what you’re shooting—a superzoom supertele that is incredibly lightweight and inexpensive—it’s tough not to be pleasantly surprised with how sharp this lens is.

Vignetting:  I always snicker a bit with vignetting (darkening of an image around the edges and especially the corners).  Photographers hate to see a lens that vignettes, and then we use Lightroom to add a vignette to 99% of our photos.

This lens does vignette, and quite a bit.  But like I said, that’s more of a feature than an issue as far as I’m concerned.

Color:  Nothing jumped out at me as far as color is concerned.  Seemed to be on par with most other lenses.

Contrast:  I was pleasantly surprised by the amount of contrast I got from this lens.

I have used the Nikon 600mm f/4 lens (over $10,000) many times and have always found it to be lacking contrast, but I found this Tamron handled it better.  Now to be clear, this lens is no where near the quality of the 600, but for contrast I think it did well.

Chromatic aberration:  Probably the worst subject on earth for showing chromatic aberration (a strange green or orange stroke showing around areas of very high contrast in an image) is a white Ibis or Egret against a dark out of focus background.

I spent a couple days shooting these birds and didn’t notice any chromatic aberration.  That’s commendable and a really nice feature for bird photographers.

I haven’t done any lab tests at all with this lens yet, so I wouldn’t say there is no chromatic abberation, but to not see it around an Ibis is a good sign.

Flare:  Seemed on par with what I’ve seen from other supertelephoto lenses.  I spent one morning shooting into the sun and didn’t notice any issues.

The build quality was slightly disappointing from the “I’m gonna show this sucker off at the camera club” perspective.  The lens appears to be made of somewhat cheap plastic.

But don’t worry, your friends will still be impressed when you zoom out and small villages across the world fill the frame.

However (and it’s a big, fat, significant “however”), I wouldn’t want it any other way.  If this lens were made of the textured “feels like steel but it’s actually plastic” plastic, then it would cost slightly more and weigh a lot more, and I wouldn’t make that trade off.  The lightweight feel of this lens is fantastic, and in my opinion worth the tradeoff in looks.

This isn’t to say the lens isn’t durable.  Really, durability can only be tested long term looking at a lot of lenses and I don’t have that information yet.  A lens that looks tough on the outside may not be any more durable than a cheap plastic looking lens.  It all depends on what’s on the inside of the lens keeping the glass elements in their proper place.

One negative about the lens is that I found the zoom ring to be too stiff for my taste.  In fact, I missed a few shots because the zoom ring was stiff enough that I couldn't smoothly track a bird, zoom, and keep my focus point on the bird at the same time.  It's not a deal breaker, but it was a little annoying at times.  The lens is still new, so it may loosen up over time.

INPUT FROM OTHER REVIEWERS

One of the specs that I have ignored for a long time in selecting lenses is the weight.  I used to be of the opinion that photography equipment was just downright heavy and there was no sense complaining about it, but lately lenses have started to come out in much lighter versions, and I can feel a huge difference in how my back feels after a long day of shooting.

Now, weight plays a significant role in what lenses I buy.

The Tamron 150-600mm doesn't disappoint.  Its overall weight is 4.3 pounds (1.95kg), which is the exact weight of an average size brick used for building a home.  If you're more of a dog person, that's about the same weight as a chihuahua.  If carrying around a brick on the end of your camera all day sounds bad, consider the weight of the comparable Sigma 150-600mm lens, which is over 2 pounds (1kg) heavier).

Is it hand-holdable?  Absolutely for most photographers, although by the end of a 3 hour shoot with the Tamron I did find myself leaning the lens against the railing at the bird preserve to save holding the weight.

The versatility of this lens is unmatched for long lens photographers.

While I was shooting on Bunche Beach one morning, I watched another workshop instructor walk past (he walked right through my shot and scared my bird away, but he waved “hi” as he did so as if that made it okay).  He was shooting a heavy 600mm f/4 lens and couldn’t maneuver the camera between shots to place the bird in the good light that was burning off with the morning sun.

On the other hand, I had ditched my tripod because there was enough light and this lens is light enough to shoot handheld.  I could easily move all around to get the bird placed right in the good spot of light reflecting in the water.

His image may have looked sharper, but what photographer would give up great light for 5% more sharpness?

Check the current price on Amazon.com, but it's usually around $1,100 (US dollars).

I’ve mentioned several times in this review that I’m thrilled with the price of this lens.  However, I made the mistake of calling this lens “cheap” on our Facebook page and several people called me out on it.  If you aren’t used to paying extreme amounts for lenses, then I’m sure this lens will seem out of reach.  But if you’ve already sold a kidney and a small child to buy a 70-200, or you’ve seen what supertelephoto lenses cost, you’ll be over the moon when you see the price tag on this lens.

I can appreciate that photography is not a cheap hobby, but this is the first time I've seen a lens anywhere CLOSE to the $1,000 price point that can consistently produce publishable professional work for casual wildlife photographers.  If you're a full time wildlife pro, you'd use something else, but for pro photographers who dabble in wildlife or if you're a hobbyist who can spend a little on gear, then this lens is a STEAL of a price!

The lens that I tested was in Nikon mount, but this lens is also available in Canon mount.

This lens works on both full frame and crop sensor Nikon cameras and has its own focus motor, so it will work on any Nikon camera under the sun.

On a crop sensor camera, this lens becomes the equivalent of a 225 – 900mm lens.  One of the workshop attendees tried the lens on a Nikon D7200 (crop sensor camera) and the result was absolutely stunnning detail of a burrowing owl.

WHAT DO ALL THE ACRONYMS MEAN IN THE LENS NAME?

Glass:  Elements in  Groups (Are more elements and groups better?)

Diaphragm: 9 circular blades (How many aperture blades is best?) 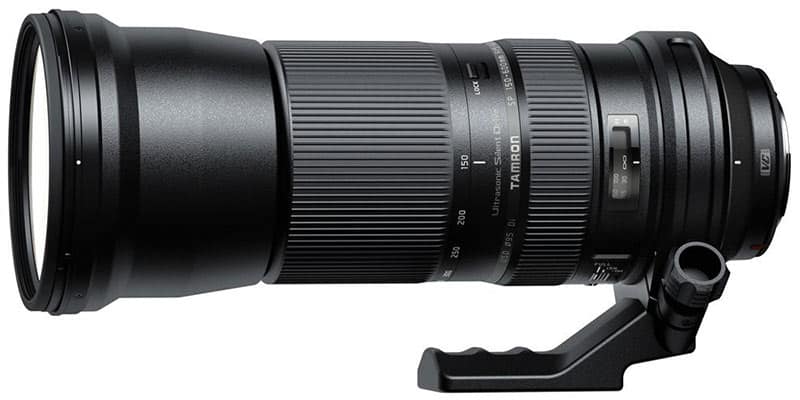