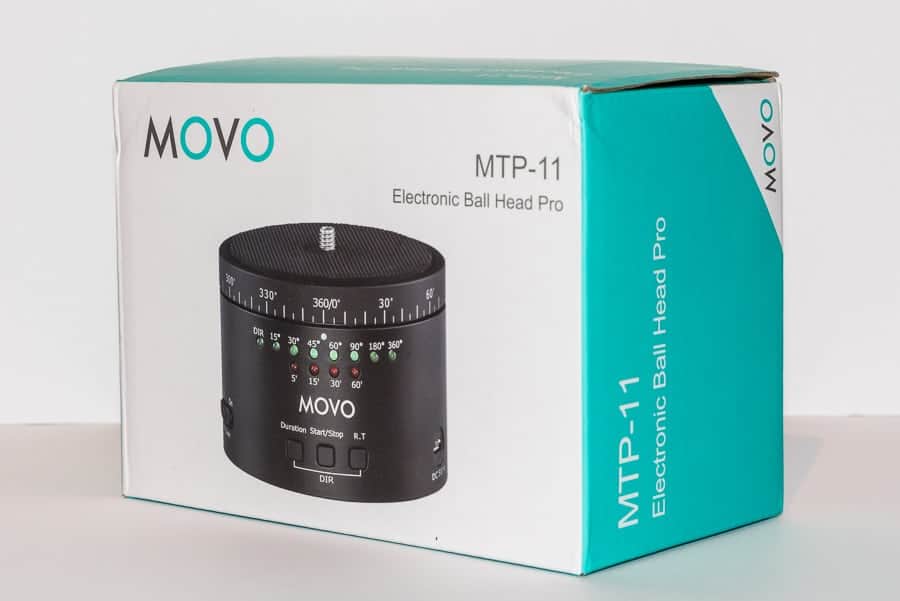 At the time of writing this article, the MTP-11 was available on Amazon for only $99.95.  That’s 1/10th -1/20th the cost of a Rhino slider!  Of course, the MTP-11 won’t give you the same results as a slider, but it you will still be able to create stunning and professional looking timelapses while you save up for that big, snazzy slider.  Plus, you can use the Movo Panoramic Head with a slider, should you decide to add one to your kit some day.

The MTP-11 is essentially a rotation device that creates a steady and consistent panning movement of a camera over a period of time.  It uses a step motor to smoothly rotate the top of the device where your camera is mounted independently from the bottom of the device, which is typically mounted to a tripod.

The MTP-11 can rotate in a clockwise or counter-clockwise fashion from 0-360 degrees.  You can change the direction of the rotation by simultaneously pressing the Duration and R.T buttons.  By altering the degrees of motion (duration) and the length of time of the motion, you can adjust the rate of the panning movement.  For example, the fastest setting is to set the head to rotate 360° in 5 minutes.  You can actually watch it spin around.  By contrast, the slowest setting would be to rotate 15° in 60 minutes.  The movement of the MTP-11 is practically imperceptible at this setting.

Made of aluminum, the MTP-11 has a ¼”-20 stud screw on top to receive a camera or ballhead and a ¼”-20 to 3/8” tripod mount on the bottom to attach to any standard tripod.  It comes with a padded case, micro USB charger, and mounts for either a smartphone or a GoPro.  It can safely hold DSLRs up to 4.4 lbs (2kg) when working on a horizontal plane or at a 30° angle.  When used in a vertical orientation or upside down, its load capacity is reduced to 3.3lbs (1.5kg), which would still hold most small to mid-sized DSLRs with light lenses. The USB-chargeable battery has a 6-hour battery life depending on the weight of the camera, and it can remain in standby mode for up to 50 hours.

I haven’t discovered any real disadvantages to the MTP-11, although there are a couple of limitations, which is to be expected given that it is such a simple device.  The primary limitation is that your timelapse can’t be longer than an hour.  If you wanted to record for longer than an hour, you would have to push the start button again.  This is a disadvantage because the camera really shouldn’t move AT ALL during a timelapse sequence, and chances are it would move a tiny bit when the start button was pressed again.

Another limitation is that it uses a step motor to rotate.  While this allows you to set a speed and angle of rotation, the movement of the MTP-11 can’t be synchronized with your camera timelapse settings.  This could potentially lead to a slight jerkiness in the final timelapse, where the images appear to jump from one frame to the next.  Some people have reported a slight jerkiness to their timelapses, but I haven’t found that to be the case.  I think the potential for this can be reduced by tweaking the timelapse settings to increase the number of images taken (decrease the interval time) and by programming the MTP-11 to rotate more slowly.

So far, I’ve been impressed by the Movo Motorized Panoramic Tripod Head, and I highly recommend it for anyone who is interested in getting more creative with his or her timelapses and is trying to stick to a budget.  I don’t think you’ll be disappointed!  Check out a video version of this review with some examples here:

How about you?  Do you have a low budget option for jazzing up your timelapse photography?