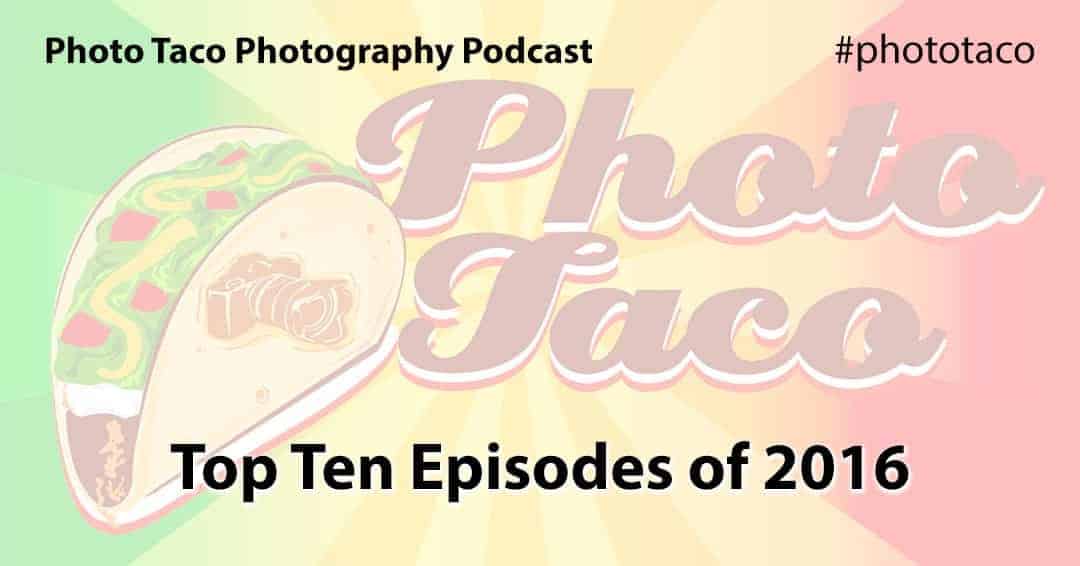 I want to thank all of the readers of this site and the listeners of the Photo Taco Photography Podcast for making 2016 such a great year!  Based on your feedback there were some format changes made to the podcast and I think it really helped make the show better, so thank you for that as well.  I am really excited to see where we head in 2017 but thought it would be fun to quickly post links to 10 episodes that were most listened to in 2016, sort of a #phototaco #topten of episodes rather than photos.

Note: You can find Photo Taco podcasts using google to search for them, just type in “photo taco {topic}” where {topic} is whatever you want to learn about and there is a great chance I have already done an episode on that topic.

In this episode explained the Smart Previews feature that Adobe put into Lightroom 5 back in 2013 and how it can be used to make your culling go 4x faster by sort of tricking Lightroom that your photos aren't available even if you don’t use an external hard drive.  Several months after this episode Adobe updated Lightroom with a “turbo” mode that the Lightroom Queen (Victoria Bampton) and I talked about in another Photo Taco episode called “Lightroom Queen“that didn't make the top ten most listened in 2016 but was actually one of my favorites.  Adobe allowed you do use Smart Previews in place of originals in the Develop module, but even with that feature added I have found that using my Smart Previews trick discussed in this episode really increases the performance of everything in Lightroom.

I answered a listener question about in-camera white balance, what it is and if you should use it.  I know understanding white balance was a bit of a mystery to me when I first picked up a DSLR in 2011 so I can understand why a lot of listeners would have been interested in getting a better understanding of it in this episode.

Prompted by numerous questions I got asked regarding exposure compensation, this is one of several “Explained” style podcasts where I dove into a lot of detail on a topic that even if photographers were familiar with the concept I thought they may learn something.  If “Explained” is in the title, even if you think you know all about the topic, you should take a listen because it usually means that as I researched the topic I found more than I thought I would.

Sometimes I tackle more of a personal topic that really doesn't have anything to do with the technical aspects of photography and this is one of those episodes.  I am so glad to see it was one of the top ten most listened to in 2016 and I think there is a lot of good information in there on what it is I had learned helped a photographer something more than an amateur.

Another in the “Explained” series of episodes in 2016 that was very popular, again taking a deep dive into metering modes and sharing a lot more information that even experienced photographers may not know about metering.

Maybe the thing I get the most questions on is how to deal with storage as a photographer.  Photographers have to figure out how to use a camera, how to get their photos onto a computer, and then how to process them.  There is plenty to learn there and most of the time they don't look into how to manage their storage (hard drives) until they are forced to by either having a hard drive fail or getting a message on their computer telling them they don't have any more space.  In this episode I shared a lot of information about how I think photographers should think about storage before their computer forces them to.

Of all the top ten listened to episodes of 2016, I think this one surprises me the most.  This one had nothing to do with any listener questions, I did this episode because it was something I had worked through myself and thought I would share the lessons learned as I went through the effort of replacing backgrounds in my own portrait work.  I mostly replaced the backgrounds with all white, a look a really came to love in 2016.

This one made a lot of sense to me as being #3 of the top ten because I think of all the episodes I did through the year this is the one I was most surprised at how much there was I actually didn't know about focus points.  If you missed this one, you need to make sure to check it out.

In total on the year I did 7 “Explained” episodes and 4 of them made the top ten most listened to episodes.  I am glad to hear that because I intend to do several more in 2017.  In fact, if you would like to suggest an “Explained” model episode be done in 2017 drop me a note using phototacopodcast at gmail dot com (have to spell it out to prevent the bots from attacking) or DM me on Instagram where it is at phototacopodcast.  Anyway, the histogram is a really powerful and important part of my own workflow and based on listener suggestions it seemed that it was something not well understood and I thought an “Explained” episode on the topic would be very helpful.  Seems you all agreed!

It took a long time for this episode to enter the top ten most listened, but not only did it get there, it took that number one spot for all of 2016.  It was also the longest episode of the year – BY FAR.  It was really fun for me to have my good friend (he is actually a good friend, not just using a nicety or a term there, Sharky is a great guy who I have really come to know well and am lucky enough to count him as a personal friend) Mike James who goes by his nickname “Sharky” or “lensshark” on all social media.  He is the host of the really well done Petapixel Photography Podcast that I highly encourage you to add to your podcast feed if you haven't already.  In this episode we went into a lot of detail about how to shoot sports photography.  Not just the technique, but tips about how to get yourself into sporting events in order to try out those techniques.  A very worthy most listened to Photo Taco podcast of 2016.

Thanks again to all of you readers and listeners for an incredible 2016 and I am so excited to see us all grow together in 2017!  Happy New Year to the Improve Photography Community!