The Laowa 15mm macro lens is exactly what it sounds like – an extremely wide angle lens that focuses as close as 1:1 macro. What that means is that you can (theoretically) photograph tiny things so close up that they take up the same amount of space on your sensor as they occupy in real life. That means filling the frame with a largish insect or smallish flower, for example. Very cool, but there are tons of macro lenses out there, as well as some other very good options for shooting macro without owning a macro lens at all, as you can see from this excellent article. The stand out feature of this lens, what really sets it apart is that it is so wide angle, encompassing 110 degrees of view on a full frame camera. That is also its biggest drawback. Most macro lenses are 60mm or longer in focal length, which makes sense because many of those tiny things are either inconvenient or impossible to get super close to, but the Laowa 15mm is having none of that. Apparently, this Chinese lens manufacturer (that also goes by the name Venus Optics) wants you to get really up close and personal with the creepy crawlies…like, practically touching them with the lens. The other unique feature of this lens is that it shifts to decrease wide angle distortion, possibly replacing the need for an expensive tilt-shift lens in your kit. 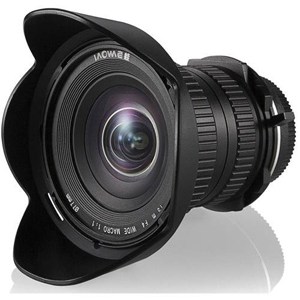 The Laowa 15mm Macro lens retails for about $480 USD on Amazon. It is a fully manual lens, meaning that the aperture and focus are both set on the lens itself, not through your camera. A manual aperture can be challenging to use because your camera normally shows you your scene with a wide open aperture, letting in lots of light for you to focus with and then snapping closed to your selected aperture only when you press the shutter. A manual aperture means that when you stop down (as one often does for the obvious uses for this lens, macro photography and wide angle landscapes), what you see through the viewfinder becomes darker and it becomes increasingly difficult to focus as you decrease the size of your aperture. This lens has an aperture ring that goes from f/4 – f/32. The ring is smooth to turn, with no “clicks” at the apertures, so it can be easy to jostle it and change your aperture inadvertently. The minimum working distance is  0.47cm (less than 2 tenths of an inch)!

Let's not beat around the bush here, you want to know whether I love the Laowa 15mm Macro lens or hate it. The answer is a little bit of both. You are also wondering whether or not you should get this lens (I know, my insight is uncanny. Fun fact – I worked for many summers as a Fortune Teller). The answer: maybe.

So, now that we've got the preliminary niceties out of the way, you should know that this review is not going to include any grids of shots of text taken at every f-stop to show the diffraction at f/22 or the chromatic aberration at f/4, because…yawn. Plus, it's been done. I know what I want to know when I'm thinking about buying a lens like this and that's “what will it allow me to capture that I couldn't do without it?” and “what is it like to use the lens?” I believe in all that math and science stuff, I just don't care about it, I figure that's somebody else's job.

So, to answer my first question here's why I bought the lens. First of all, as you may have noticed from my other lens reviews, I've kind of got a thing for the offbeat and unusual creative tools. Don't worry, you won't hurt my feelings, I'm well aware that I'm a sucker for a certain type of marketing. I have no regrets. (Well, maybe a few, but they're the same mistakes everyone makes: kit lenses, variable neutral density filters, a few nights when I drank way too much tequila…). So, there's that.

The Laowa 15mm macro scores very high on the novelty scale. Yes, some fisheye lenses can boast similar claims including almost infinite depth of field, but this isn't a fisheye, you get a fully covered sensor. The Laowa 15mm can focus on subjects that are almost touching the lens. At that wide a focal length, that is a HUGE difference from, say the Nikon 16-35mm f/4, which I also own and which has a minimum focusing distance of 12″ (30cm) when zoomed out to 16mm. That doesn't sound like a lot of difference, and with a telephoto, it wouldn't be, but with a wide angle, it is huge.

A Plus for Pet Photography?

Secondly, I thought an ultra wide angle macro lens would be fun for pet portraits. One of my favourite shots to take of the rescue dogs that I photograph is a wide angle shot of their big, soulful eyes looking up at the camera. People have an affinity for the “squishy”, flat faced breeds of dogs, with their big, round eyes partly because they remind us of human babies. In fact, we love any animal with eyes that appear large compared to their size and if you think of the animals that society tends to consider “cute”, you can't miss that co-relation. We feel that way because human babies have eyes that are large in proportion to their faces (many people think that babies are born with eyes that are already adult sized, but this is not quite true. They do grow, but most dramatically within the first year of life and nowhere near as much as other nearby features like the nose). Dogs, in particular, have evolved alongside humans to engage in mutual “gazing”, an activity that would be considered hostile staring, between any other two species but studies show that we actually get the same release of oxytocin from gazing at our dogs as we do from gazing at human babies! In other words, the canines are playing us for fools and if there's a way that I can manipulate a hormonal response into a print sale that deepens the human-animal bond or makes an adoptable dog look more appealing to a potential family, I'll exploit it shamelessly.

For this feature, I'm lukewarm on the lens. Yes, it allows me to get insanely detailed, up-close shots of pets BUT, do you have any idea how difficult it is to photograph an animal from THAT close? It's really, really hard and when you do achieve it, you may realize that, much like with human faces, maybe we don't WANT to see every bit of eye goop or tear-stained fur or whatever the schnauzer ate for breakfast that is now caught in his beard.

Third, and still on the subject of pet portraits (because apparently I only get an oxytocin release from animal faces and feel very little affinity for human faces), I thought that the wide angle would be good for environmental portraits and detail shots. Imagine being able to have the dog up front in the scene and show the family's entire, beautifully landscaped yard and home behind it, or the close up shot of the pads of the cat's paw, the entire cat, and the whole living room. Of course, this could backfire, if the client had a disaster of a living room, like mine!

For this scenario, the lens is pretty awesome. I would never do a whole pet portrait session with the Laowa 15 mm on my camera, but for a handful of shots showing the pet interacting with its environment, it is hard to argue with a lens that can include an entire house from 10-15 feet away. Add in the shift feature to combat distortion and straighten vertical lines (I'll touch on this more, later) and it becomes even more appealing.

Not To Overlook The Obvious…

Fourth, I thought it would be cool for insects and flowers.

Turns out, it is and it isn't. Right off the bat, just forget about using this lens for tiny jumping spiders or super detailed macro shots of fly eyes. You just have to be too close to get that 1:1 magnification and unless you are indulging in some very unethical nature photography practices, that's just not going to happen. It can be great for larger, less nervous, slower moving insects, like caterpillars, moths, and mantids or for reptiles like turtles that may allow you to get quite close if you are slow and careful. Flowers don't mind at all if you get really close and the Laowa 15m can get you a unique and beautiful scene showing a huge and detailed flower in the foreground, surrounded by hundreds of flowers growing smaller and smaller into the background. Extremely difficult to use for insects, but can get some very interesting results when it works, excellent lens for photographing flora.

Fifth, the lens has a shift feature (but no tilt) to help combat the wide angle distortion when photographing tall buildings and such. I do not own a tilt shift lens and probably don't have need for one, since I don't do a ton of that sort of photography, but I thought it might be useful to have in my bag of tricks and it absolutely is. I guess that, before using this lens, I just never really “got” the whole tilt shift thing and what it could do for fixing distortion. (Of course, I totally got why someone might want one for selective blur and miniaturizing effects, it was the practicallity that was beyond me, as it always is). I was very impressed with how well it fixed the distortion, without any cropping of the image, as happens when you attempt to fix distortion in post processing. On a full frame camera there is a heavy, black vignette at the top of the photo (when shifting up, at the bottom when shifting down), and so they actually only recommend the shift feature for APS-C, or “crop sensor” cameras, but I find that is a small price to pay and much more easily fixed in post than the distortion is. Since you can see it through the viewfinder, it is easy enough to compose around it

In Case It's Not Challenging Enough…

The lens itself is slightly recessed from the body, as most lenses are, but this becomes a bit of a problem with the Laowa 15mm macro because of the extremely close focusing distance. In an attempt to achieve actual 1:1 macro, you can end up with your subject being quite shaded by the edges of the lens. I tried to combat this by purchasing a macro ring flash, but that just made the problem worse because the subject was then right inside the ring flash, shaded even more and the light from the flash was not touching it at all. The ring flash also shows around the edges of the photos (a thick black vignette, basically converting the view into something similar to a circular fisheye).

To Get To The Point…

If you already have most of the common focal lengths covered in your camera bag and you are looking for something different to spark your creativity, you could do a lot worse than this sharp, affordable and surprisingly versatile lens.