I have read countless reviews online of macro lenses, but the problem with all of them is that they only have one lens on hand.  That makes it pretty impossible for photographers to know which option is the best bang for the buck.

I purchased 8 different options for macro photography, so in this test we'll be reviewing extension tubes vs. dedicated macro lenses vs. close focus filters vs. bellows vs. a reverse ring.  Let's do this!

When it comes right down to it, I would definitely purchase a set of extension tubes as your first macro lens.  Why?  Because they give excellent quality results, and if you decide to purchase a dedicated macro lens down the road, you can use them in combination with your dedicated macro for even more magnification.

As far as the focal length, it's a tough call.  I did prefer the 105mm focal length of the Nikon, but again, the difference was very minor.  Two areas where the Tamron performed better than the Nikon or the Sigma macros was (1) autofocus speed, and (2) weight.  The little Tammy focused really snappy and it weighs 14.3oz, which is about half the weight of the Nikon and less than half the weight of the Sigma.  For me, a macro lens is only rarely on the camera and only makes it in the camera bag if I happen to be going light on other lenses, so having the weight savings of the Tamron means I'm much more likely to take it with me. 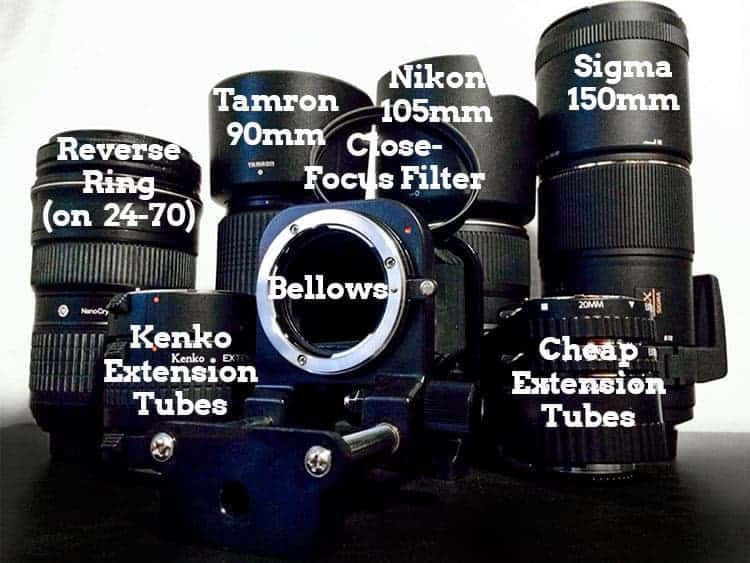 What options for macro photography were tested?

I tested 8 different options for macro photography in this review and spent about 3 full days doing the testing and reviews.  Here are the options, and a little about each one…

The reverse ring was unbelievably terrible.  In my testing, it showed odd optical flaring, the sharpness was poor, etc.  Basically, it was as bad as you can imagine.

Bellows – A bellows is an accordian-style device that mounts on the end of your camera and then allows you to extend the lens out in front of the camera.

The trouble with the bellows is that it is very inconvenient to use.  Unless you are shooting locked down on a tripod and shooting something stationary, it is too slow for most macro photography uses.

These extension tubes focus quickly, produced sharp images, and had quality metal mounts so I have to think that the durability will be good.  Not to mention that the Amazon reviews for this extension tube set are fantastic!

Canon 500D Close Focus Filter – A close focus filter is simply a thick filter that screws onto the end of your lens and allows you to focus closer than you would normally be able.

I tested this filter on the Nikon 70-200mm lens.  Yes, that's right.  A Canon filter on a Nikon lens.  The Canon 500d will work on any brand of lens because filter threads are standardized between brands.

The trouble with the close focus filter is that it will not allow for focus at anything but one distance.  You have to move forward and backward until the focus is right, and then you can shoot the photo.  This can be time consuming because you are further away from the subject so it is more difficult to find focus than with extension tubes.  Another problem with the close focus filter is that it doesn't allow for as much magnification as the other options tested here.

Kenko Extension Tubes – I have heard great things about the extension tubes from Kenko.  Several professional photographers I know have them and like them.  On a hunch, I purchased another set of extension tubes that were far less expensive to test head-to-head.

Tamron 90mm f/2.8 Macro Lens – The Tamron 90mm macro is lightweight and inexpensive.  In testing, the image quality was nearly on par with the Nikon 105mm macro with very very little difference between the two.  One important point about macro lens testing is that it is extremely hard to determine sharpness.  Whereas with most lenses the sharpness differences are easily tested, with macro photography the detail in tiny objects is often so fine already that it's difficult to see a difference between lenses.

While I would say that the Nikon is slightly better built, the Tamron is lighter and almost half the cost. I also found the image stabilization to work equally well on both cameras, and the autofocus actually seemed slightly snappier on the Tamron.  For me, even as a very picky lens tester, I pick the Tamron.

Nikkor 105mm f/2.8 Macro Lens – The Nikkor 105mm macro is exactly what you'd expect from a lens manufacturer with such a reputation.  It's well built, the optics are beautiful, and I found the 105mm focal length to be the most convenient for all around macro photography.

It's a great lens and if money were not factored into the equation at all, I'd probably pick the Nikon–but only by the slimmest of margins.  But the truth is that money IS part of the equation, and the differences in terms of optical quality between the Nikon and the Tamron are microscopic (almost literally).

Sigma 150mm f/2.8 Macro Lens – Last but not least is the Sigma 150mm f/2.8 macro.  I feel a bit bad for this lens.  I think I probably didn't give it a fair shake.  Most macro photographers prefer the longer focal length of 150-180mm.  But for me personally, I found it to be too telephoto which made the backgrounds too narrow.  That's a personal preference, which is why I say that this lens probably didn't get a fair shake. Then again, the point of a review is to give my opinion, right?

This lens is very solid and well constructed.  I did see several instances of front focusing in the tests, but most of the time the results were good.