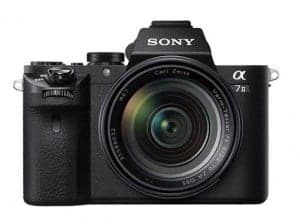 Barely a year since the a7 release, Sony has announced an update to their mirrorless full-frame body in the a7 II that now boasts a 5-axis image stabilization built into the sensor along with a few other enhancements.

Sony says the a7 II uses it's 117 phase detection and 25 contrast detect focus points up to 30% faster versus the previous a7 model, but we'll have to see how it actually tests out.  Focus speed has been one of the specs seen by many photographers as a limitation of mirrorless cameras, so an increase in the focus speed helps to close the gap on the much larger DSLR cameras.

Sony has improved the video capabilities of the a7 II by adding the XAVC S codec at 1080/60p at 50 mbs, which is very impressive although not as impressive as some the 4K video coming out of the crop-sensor mirrorless bodies from manufacturers like Panasonic.

Manufacturers call it by different names (i.e. image stabilization, vibration reduction, steady shot, optical stabilization, …) but all of them are doing the same thing – take that shake out of your hand held shots so that you can still get sharp focused photos with slow(er) shutter speeds.  OK, so this has been around for a long time.  To get it in lenses you pay a pretty good premium, but it is available in the lens or in the body from every manufacturer.  In fact, with the release of Apple's iPhone 6 Plus “optical image stabilization” has even made it's way into a phone.

However, Sony says this is the world's first full-frame camera body to offer stabilization along 5 axis' that provides 4.5 stops in poor light.  Meaning you could go as many as four clicks slower on the shutter speed and get the same sharp image.  Reality is likely to be something more like 3 stops, but that is still impressive.  Check out the video to see it in action.

To me, the most impressive feature of this camera isn't anything technical about the body itself, it is the time frame it took to update the a7.  The original a7 was released in October of 2013, so an announcement about the a7 II in November of 2014 puts it just over a year between significant updates.  Jim and Darin have been on record a couple of times in recent podcasts about mirrorless bodies not being for them (yet), and at this point they aren't for me either (yet), but the rate of change and the amount of innovation Sony is demonstrating here makes me wonder how long Canon and Nikon are going to keep me and other photographers.

When Can You Get One?

There wasn't actually press release and so far the word is only about a release to Japan being imminent, so we don't know when or if it will come to the U.S. or how much it will be when it does.  Many are guessing something along the lines of $1,600 U.S.

3 thoughts on “New Sony a7 II has 5-axis Image Stabilization!”