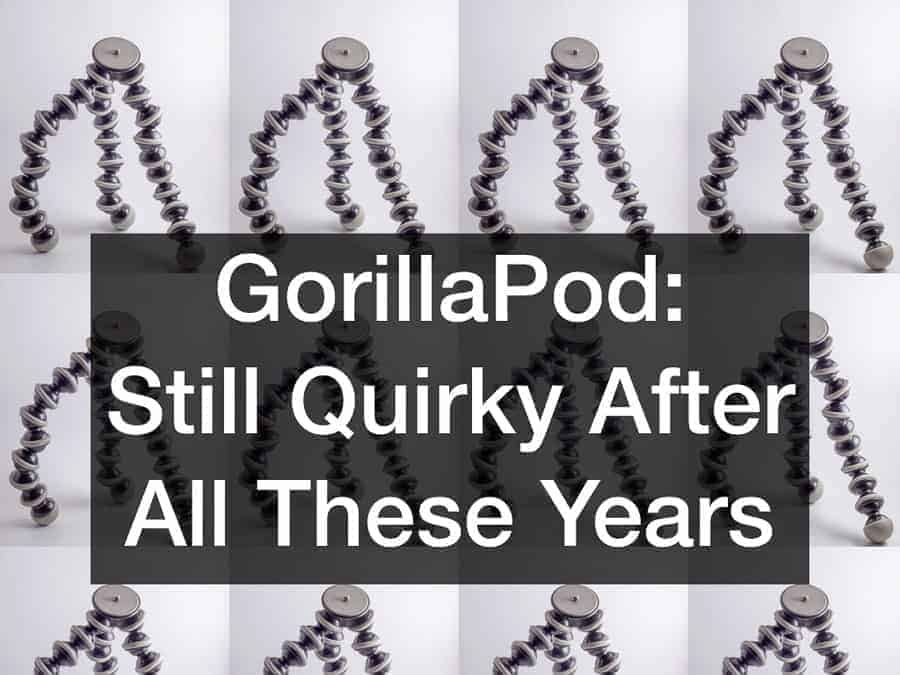 Twelve years after the introduction of the original Joby® GorillaPod, it remains an extremely popular photo accessory. It comes in a variety of sizes and has spawned an array of accessories and imitators. By any standard, it stands as a prototype for a successful piece of photo gear. I purchased my first GorillaPod in 2008. Its combination of portability and versatility have made it one of the most used pieces of gear I've ever owned.

The original promotional material for the GorillaPod (which seems to be rebranding itself to remove all capital letters–“gorillapod®”–how humble!) stressed versatility and portability unmatched in conventional tripods.  And that still seems to be the thrust of the product's elevator pitch. It now boasts stronger joints and comes in eight different sizes.  But it's still pretty much the same core idea–and that's a good thing. It was innovative when it was new, and it still holds up today.

It's also clearly marketed to amateurs at least as much and professionals. The current promotional video is careful to feature both DSLRs and iPhones; video and still photos.  While The GorillaPod probably always appealed to amateurs more than professionals, it offered a heightened durability for nature and landscape photography, with a placement versatility that traditional tripods couldn’t match—and frankly never tried.

For the uninitiated, the GorillaPod is a small tripod, which now comes in a variety of sizes and its larger models can support the weight of a DSLR with moderately-weighted lenses, such as a 24mm-70mm f/2.8. I may be wrong on this, but I believe it came originally in just two sizes. The smaller model was ideal for the early digital cameras popular in the 2006-2009 era. With three bendable legs, each made up of interlocking joints., the tripod had a great deal of flexibility and freedom of movement for each leg of the tripod. The legs are not extendable and do not lock into place.

But its versatility always involved a certain misdirection. By marketing itself as a portable tripod, its flexibility seemed like a revolutionary area. Behold, a tripod that could wrap around a fence post, or a tree branch!  Of course, this was never the point of a tripod.  The tripod both steadies and levels an image. In truth, the GorillaPod sacrificed the later to enhance the former.  Sure, it could steady a shot using a fence post. But it had no inherent tools to help level an image.And the innovative tripod was not without its problems.

The GorillaPod’s size required some other equipment before it could be useful for any eye-level portrait work. A picnic table might work in a pinch. But getting the camera lens to a particular desired height was going to be difficult.  The photographer is at the mercy of the environment around her.  But as they say in the marketing world, “That’s not a bug, that’s a feature!” For amateurs who had little experience with landscape composition, forcing them to get low to shoot could emphasize foreground images, improving an an otherwise mediocre image.

Another sticking point was the lack of a more sophisticated way to attach the GorillaPod to the camera. When I bought my first GorillaPod, there was no ball head and no quick release plate option. You could screw the Gorillpod to the bottom of the camera. Or, if you didn’t like that option, you could . . . use a regular tripod.  It did give you the additional security of tightening the connection screw from the bottom. This allowed a loose-fitting camera to be re-tightened without turning the entire tripod. But today, $70 will get you Joby's ball head and quick release plate, designed to work with the 15.2″ GorillaPod 5K, which is capable of supporting 11 lbs of camera gear. If I were going to use the GorillaPod for anything heavier than an iPhone or perhaps a mirrorless camera, I would recommend it for both stability and precision composition.

In my experience, the original GorillaPod, when used sans ball head or release plate, was prone to loosening. It was common to have to re-tighten it after a few different compositions. And if you wanted to grip the legs of the GorillaPod onto a vertical pole, you were well advised to keep the camera to the right of the pole. Otherwise, the weight of the lens tended to unscrew the camera a bit. Adding weight through a battery-pack grip or a heavier lens only made this problem worse.

Finally, the Gumby-inspired bendable legs were difficult to straighten out.  They were not weak, but they were sometimes too flexible. Some of the joints were always bent a little. Imagine having a push broom that's connected to a stiff rope instead of a wooden handle and you'll begin to approximate the sensation. The result was that when you WANTED to make a perfectly-straight, 15” tripod, it was always just a little off. Often, this was not a deal-breaker. Particularly if you use Lightroom to straighten out the horizon of your landscapes. But if you were a stickler for getting this kind of thing right in-camera, you were bound to be occasionally frustrated.

Yes, you could wrap the GorillPod around a pole, or hang it from the branch of a tree by wrapping two legs clockwise and the middle-leg counter-clockwise. This was the ideal function of the ball-in-socket design of the multi-joint legs.  And if your camera and lens weren’t too weighty, and you could fix any leveling via post-processing, then you were good to go.

All photo gear–and accessories in particular–are idiosyncratic. You like what you like. I like what I like. What works for me, because of technique or experience or preferences, might be a complete hassle for you. With that self-identified bias in mind, here are some of the best uses for the GorillaPod I've found over the years

The Gorilapod was so durable, you could wrap it around a bag strap like a gear tie or bungee cord, without fear that getting thrown around by baggage handlers at the base of a Boeing 737 in Dulles airport would crack it in half.  That just wasn’t gong to happen.  I can’t say that of my other tripods, even the small ones. That meant that it did not need to take up space in your bag. Although a little bulky for its height, it usually kept the shape it was placed into. It also didn’t look expensive, so it wasn’t catnip to an airport sneak thief.

2. Self-portraits in the midst of other shooting.

Have you ever been using a tripod for nature photography, following an animal, only to have the bird or deer move from a still position, to quick motion? Not having time to work the quick-release plate, you find your self grabbing the entire tripod and jamming the shutter button down for some continuous shooting. I’ve done this mortises than I can count.  Sometimes, the results are worth awkwardly dragging the tripod a few inches. Sometimes not.

Now imagine the tripod was a foot high and only weighed a fraction of a pound. The Gorillapod was a tripod that you could leave on the camera for hand-held shots, and return to the ground when you transitioned from action shot back to landscape images. It was a bit awkward, but it was easier than twisting the Gorillapod on and off for each single shot.

The GorillaPod predates the selfie stick as a social phenomenon, though it never generated the Olympic levels of annoyance and ridicule. With a quick setting to the self-timer, I could jump into the shot in a fraction of the time required to set up a traditional tripod. Also, Joby's more recent marketing material definitely suggests that the selfie stick is one tool in the Swiss Army knife that is the GorillaPod. 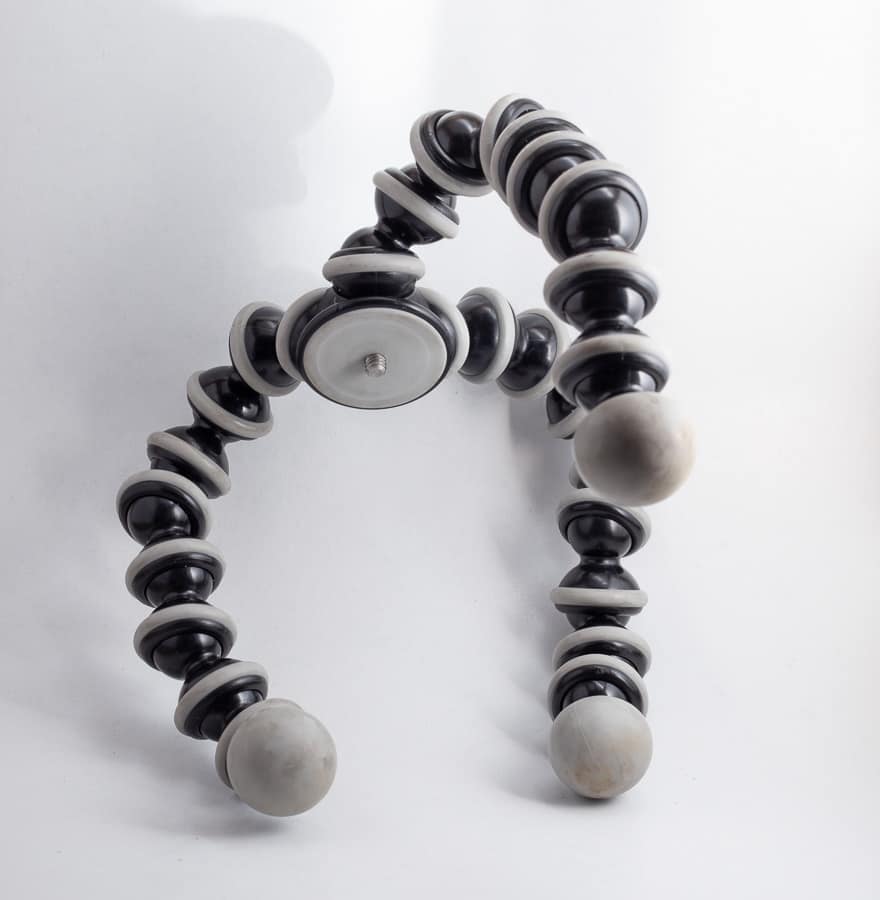 If you’ve run out of mounts for your Go Pro or action cameras, the GorillaPod—the full-sized or smaller version—made a passable substitute.  Because small action cameras are relatively lightweight, it could stay in place better than most DSLRs. I’ve personally used this technique on tree branches, on a Jet ski, and on the crossbar of a Jeep.

In the days before drones—or at least before the user-friendly and relatively affordable drones available today–I even used a small GorillaPod to and a Go Pro-style camera to capture my first aerial shots by attaching the legs of the GorillaPod to a kite. Yes, a kite. Granted, it was not a small kite.  And the 50-foot fall this rig took after a stiff gust of wind sent it tumbling down to the ground did break one of the legs off the GorillaPod.  But it was totally worth it!

Maybe you need a few seconds of some ground-level video. You could put your camera directly on the ground and hope it's not wet. You could place it on top of your camera bag or some other prop and hope it doesn't roll off. Or you could invert your full-size tripod, lower the camera, then shoot and invert the video, then flip the video. But you're hoping not to take that much time. The GorillaPod is still a great tool for this type of quick-and-dirty video where you don't want to put the expensive gear at risk.

But it doesn't have to be that adventurous.  Maybe you want to shoot video or your Youtube channel, or you want to Skype with your clients–but you have a small desk or tabletop.

Whenever a new piece of photo gear makes a big splash in the market, it is bound to have fans and detractors. The market for photo accessories is a bit like the parade of late night infomercial products that roam the unwatchable choices of late-20th century cable television. Sure, these gadgets always look like a fantastic new invention that will take the world by storm. Then it arrives and it doesn't always live up to the hype. And there are plenty of overpriced photo accessories that belong in the junk drawer of your photography journey next to Suzanne Somers's Thigh Master and those Ginsu knives from 1985 that you couldn't live without.

But every now and then even an “As seen on TV” product works. Every now and then, there's a George Foreman Grill. It simply does what it says it does. The GorillaPod is such a product. Maybe it's not perfect for what you need. I don't know anybody who has sworn off the use of traditional tripods for a GorillaPod. But I know many, many people who have one. For $50 or less, there are plenty of uses for a GorillaPod. If you have one, I'd be willing to bet you have other accessories that have gathered a lot more dust than this one.

And if you doubt its impact, consider this: if you had to describe each photo accessory in your camera bag with a single word, would that word be a category or a brand name? Most of mine would be categories–flashes, light modifiers, filters, shutter releases, etc. But the GorillaPod is synonymous with “bendable-jointed small, flexible tripod.” It takes fewer syllables to name the brand than the category. And it's not only a marketing department's dream to have that kind of category domination, it's usually a sign that a product has been both innovative and useful.

4 thoughts on “GorillaPod: Still Quirky After All These Years”