For many years I have shot countless motion portraits and I've almost never run into any situations where I need high-speed sync to freeze the motion of subjects.  I use inexpensive YN560 flashes I can almost always use them to freeze motion in any situation.  However, there is another option–high speed sync. Both methods have certain benefits and drawbacks, and that's what this article is about.

NOTE: This article is about a technical topic suitable for intermediate and advanced photographers.  If you're reading this and are completely confused, I highly recommend reading through the flash basics series.  Then come back to this article and just understand the takeaway from all of this–when someone tells you that you need high speed sync to freeze the action, they are almost always wrong.  You can usually achieve identical or nearly-identical results with an ND filter and regular flashes–IF you know how to set up the shoot properly.

I've recently been shooting more action sports–especially dirt biking since I have been working on my dirt biking blog.  The dirt bikes obviously move extremely fast, so it's a challenge to photograph them with flash.  Before we get into this topic any further, let's look at an example done with high speed sync, and another example with an ND filter and compare results. 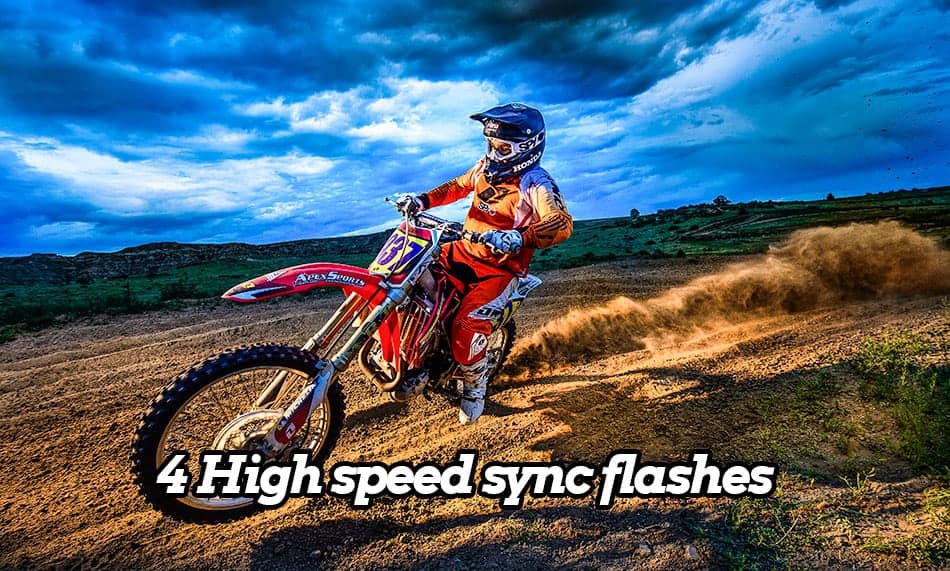 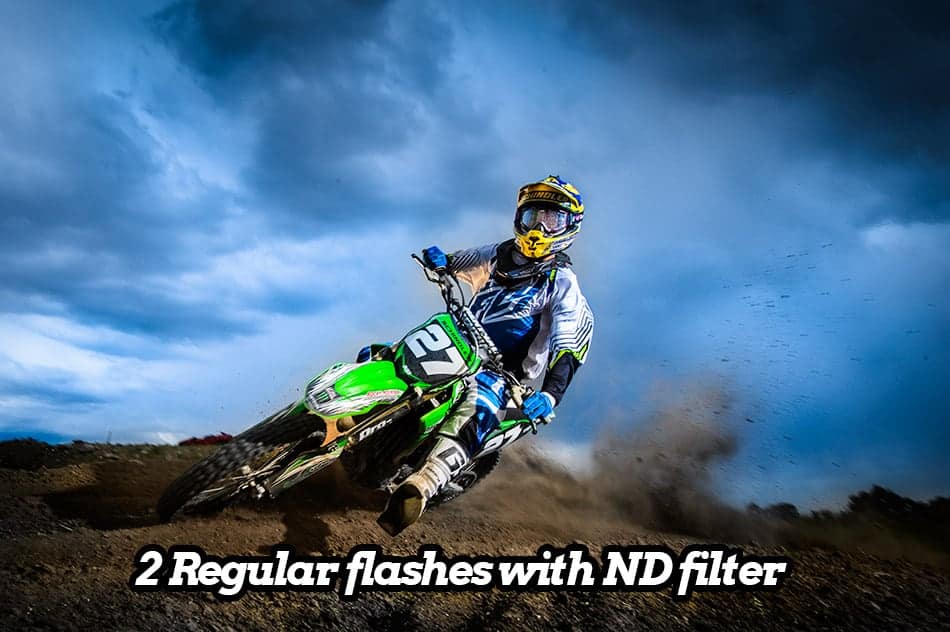 In an ND filter setup, I could shoot the same scene with an ND filter on to cut out some of the ambient light.  I used two regular flashes and shot at 1/200 shutter speed, f/16, and ISO 500.

Which of the above photos is better?  Honestly, they are almost identical in their ability to freeze the action.  Both methods worked quite well for me.  Be careful not to judge the motion by looking at the dirt since I was swinging the camera to pan with the rider and not all the dirt was hit by the flash.  But look at the dirt bike tires.  You'll see that they both show a similar amount of motion, but the high speed sync setup shows a TINY TINY amount less motion blur on the tires.  It's actually quite debatable whether the frozen motion on the top photo is better.  It's actually nice to show a little motion in the roost (the dirt behind the dirt bike) and on the wheel to show a sense of motion.

It's splitting hairs, but in general daylight settings where you can't control the ambient light, the high speed sync flash method will freeze the motion SLIGHTLY more perfectly.

How High Speed Sync Works and Why It's Helpful

Normally, if you shoot with a flash, you can only use a shutter speed of about 1/200 (depending on the camera model).  If you shoot at 1/200 on a bright day with flash, sometimes even dropping your ISO and increasing your aperture doesn't block out enough of the bright daylight to properly expose the photo.  The resulting image is simply too bright.  Yet, the camera can't go above (about) 1/200 shutter speed because otherwise part of the image sensor gets covered up during the flash exposure.

High speed sync is a feature on advanced flashes that pulses light during an exposure to overcome the flash sync speed.  With high speed sync, you can use whatever shutter speed you want and still shoot with flash.  The downside to high speed sync is that you lose more than half of your flash output.  The flash power when on high speed sync is quite weak.  This means you usually need to use multiple flashes to properly expose the image.

The ND Filter, and How It Can Help

Another option for the same problem is to simply use a neutral density filter.  If it's very bright outside and you put on a 3 or 6 stop ND filter, you can suddenly reach a shutter speed low enough to match your flash sync speed.  This darkens the image recorded by the camera, and then you can illuminate the subject with a flash.  Perfect!

As long as you can block out enough ambient light, the flash essentially becomes your shutter speed.  Because modern speedlights have an incredibly fast flash duration, you're effectively using a speed of 1/4000 or faster.  The only blur in the image is from the ambient light that is also recorded.

Which Method is Best?

High speed sync flash output is dramatically reduced from the flash's capability on a non-hss setting.  This means more flashes are needed.  However, the same is true with the non-hss flashes and ND filter method.  If you use too high of a flash output, the flash duration is slowed dramatically, so you need to use more flashes at a lower output to solve the problem.  BOTH high speed sync and regular flash with ND require more flashes to get the output when attempting to freeze motion in daylight.

The only real difference between these methods is that the ambient light affects the non-hss and ND filter method more than it does with the hss method, because the hss method uses the actual shutter to freeze the action.  The non-hss method and ND filter is actually using a relatively slow shutter speed of 1/200, but then everything hit by the flash is frozen due to the fast flash duration.

In some specialized instances, you could actually freeze motion better with a non-high speed sync flash than you could with a high speed sync flash.  For example, If you were shooting in a studio and you wanted to freeze the action of a bullet firing out of a gun or a model swishing her hair, the non-hss flash with an ND filter would be a superior method.  Why?  Because in a studio environment you could eliminate all the ambient light.  You could use only the flash duration of the speedlight to freeze the motion.  On a YN-560, you could get a flash duration of up to 1/23,000 of a second if you use low power!  That's far faster than the fastest shutter speed available on a mechanical shutter and HSS flash.

Another instance where the non-HSS method is better is when you want to freeze the motion in part of the scene, but not the entire scene.  For example, on the dirt bike photos above, you see that the dirt flying up in the sky behind the riders on the HSS photo is frozen.  This can't be changed because the global shutter speed of the photo is what is freezing the action.  On the non-HSS photo, however, only what the flash touches is frozen.  So the dirt flying up into the sky has some elongation and motion to it, which is more fitting of an action shot in my opinion.  So non-HSS does have some advantages over the high speed sync method.