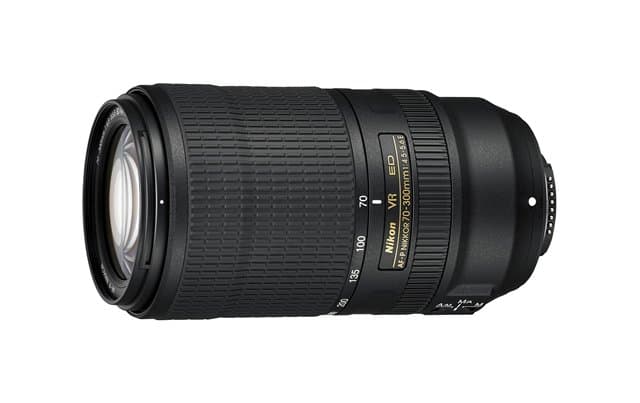 The new  AF-P NIKKOR 70-300mm f/4.5-5.6E ED VR which I will call the ‘E’ Version, is an upgrade of the current ‘G’ Version with a number of enhanced or added features.  I’m going to go through them each individually and explain why they are an upgrade and why those features could benefit you.  The new lens has an MSRP of $749.95USD and should be available soon.

Nikon's new E lenses use an electromagnetic diaphragm mechanism inside the lens barrel.  This differs from the previous G and D model lenses which used mechanical aperture controls.  The New electromagnetic diaphragm means a more accurate aperture control during high-speed shooting.  Very slight changes in the aperture can affect the exposure so haveing a more precise diaphragm control will keep exposures consistent when shooting at high frame rates.

But this means that the new E lenses require compatible cameras with the ability to control the electromagnetic diaphragm.  Most Camera bodies built in the past couple of years have this feature, but older bodies and film cameras will not be able to control the aperture and may not be able to autofocus with this lens.  For example, Nikon D3200 and older will not be able to use this lens because they can not control the aperture. Same for Nikon D5100 and older,  The D5200 and D5300 will require a firmware upgrade.  D7000 is not compatible but newer D7x00 series bodies will require a firmware upgrade. As for full frame, this lens is not compatible with the D600, D610, D700, or D800 bodies.  D750 and D810 users will be required to upgrade their firmware.    A complete list of compatibility is available on Nikon’s website.

The new ‘E’ Version uses an AF-P Autofocus system.  The P stands for “Pulse”  which uses pulse motors inside the lens to move the lens elements required for focusing instead of the previous AF-S or Silent Wave motor.   What this means for the lens is that is has a more accurate, faster and much quieter autofocus system.  This will come in very handy when filming video so that you don’t hear the lens focusing while recording.   The speed and accuracy of the AF-P system are also a big upgrade for sports and wildlife, especially birds in flight.  This is also Nikon's first AF-P lens for Full Frame cameras and shows Nikon's commitment to the technology moving forward.

This video by Nikon Asia shows how the new lens performs with shooting video.

This new E lens claims to have vibration reduction of 4.5 stops.  An improvement over the 4 stops from the previous G version.  But what do 4.5 stops of VR mean?  The generally accepted rule for shooting handheld is to keep your images sharp and reduce motion blur caused by camera shake, you should keep you shutter speed faster than the reciprocal of the full frame equivalent focal length.  For example, if you are shooting a 300mm your shutter should be faster than 1/300s.  If you are shooting 300mm on a crop body then the FX equivalent is 450mm so keeping your shutter above 1/450s will usually provide sharp images.   But VR allows you to bend that rule.   4 Stops VR means the 1/450s you had to shoot at before can be shot at 1/30s and give you acceptable results.   This new E lens with 4.5 stops should allow you do to shoot 300mm handheld at around 1/20s and still get acceptable sharp images. Assuming, of course, your subject isn’t moving to cause motion blur from that aspect as well.

In addition to the extra half of a stop in VR performance, the new lens also has an added sports VR mode that the previous lens does not have.    This new mode allows for more erratic movement of the camera as if you were following a moving subject such as an athlete or wildlife where there is sudden stops and changes in direction.

Those are the major and most important upgrades to the new lens but there are some other features that may benefit you as well.

Drip and Dust resistant:    The new lens will stand up to the elements, preventing dust and water from getting inside.  I don’t know if I would use it in a heavy downpour, but it can probably handle light rain , or the occasional bit of mist from a waterfall splashing on it.

Who should get this lens?

The 70-300mm focal length is a very popular lens for  people who take photos of wildlife and sports but don’t want to invest in big heavy glass like a 70-200mm f/2.8 or a longer telephoto.  If you just want to take pics of your kids playing baseball or birds in your backyard this is an ideal lens.  Especially if you use it on a crop sensor camera body.

This lens replaces the very popular G version, with some nice upgraded features.  If you currently have the existing G version you may not feel the need to upgrade to this version.  But if you currently do not have telephoto zoom lens and are looking to add one, this might be an option for you, if you have a compatible camera as well.

That sums up the preview of the AF-P NIKKOR 70-300mm f/4.5-5.6E ED lens.  The upgraded features will continue to make this a popular lens choice for most people looking for extra reach without spending a lot of money on more expensive faster glass.  This looks to be a nice lens, but time will tell when people get their hands on it and can review it for themselves.  Hopefully this article cleared up any questions you may have had on the differences between this new lens and the previous one.  If you do have any other questions or need clarification on anything please leave a comment below.