Lightroom’s Basic Panel in the Develop module and Adobe’s Camera Raw controls have a series of sliders with deceptively simple names, among which are Highlights and Shadows, and Whites and Blacks. So what’s the difference between the Blacks slider and the Shadows slider? Is there a special advantage in using one or the other? When should you use Blacks and when should you use Shadows? Knowing the difference can give your photos the extra pop and polish that sets them apart from others.

The Blacks slider affects the very darkest tones of an image while the Shadows slider influences dark or shadow areas. Both are global adjustments in that, unlike an adjustment brush or gradient, they can affect all areas of an image to a degree. Moving either slider to the left increases the tonal range of an image, makes the darks even darker, makes the overall image darker and increases contrast. Moving either to the right compresses the tonal range, makes the darks lighter, makes the overall image lighter and decreases the contrast.

On a histogram, Blacks controls the far left area, while Shadows adjusts the left central area. In Lightroom, you can easily see which tones each slider most affects by hovering your cursor over the corresponding slider. (For a great overview of histograms, listen to Jeff Harmon’s Photo Taco episode “Histograms Explained”).

The Whites and Highlights sliders perform similar functions at the right or bright end of the histogram. You can learn more about them here.

How Are Blacks and Shadows Different and Why Should I Care?

The Blacks slider sets the black point, the dark end of the tonal range of the image. The Shadows slider can lighten and recover detail in the dark areas or can further darken dark areas, while avoiding clipping.

Most photos benefit from having a wide tonal range—the full dynamic range from pure black to pure white. That provides some contrast in the image. The black and white points also help anchor a viewer’s perception of the tones and the relations between tones.  Capturing that wide dynamic range, however, will often result in really dark shadow areas, without much apparent detail.  That's where the Shadows slider comes in, opening up those areas and making those important details visible.

There will be exceptions, of course. A photo of a gray, foggy day may not have any pure blacks, for example. Where you place the black point is up to you.  But, in general, a wide range of tones makes for a more pleasing and dramatic image.

Raw files tend to look a little flat coming out of the camera and, if you use the expose to the right (ETTR) technique when shooting, even flatter: your images will tend to look bright and the histogram will tilt heavily to the right. Colors can look washed out and the image will lack contrast. Setting a black point can increase the contrast and apparent saturation of colors and go a long way to bring that image back to resembling what you envisioned when you took the photo.

Let’s look at each slider in more detail.

Use the Blacks Slider to Set Your Black Point

The black point is the darkest point in your image.  In many cases, that will be the pure black tonal value where there is no visible detail—Zone 0 in Ansel Adams’ Zone System—where the Red, Green and Blue values are each zero. However, you can use the Blacks slider to position the black point at any point along the histogram, depending on the individual image and your vision for the finished picture.  In a typical workflow, for an average photo, I would move the Blacks slider until the histogram just touches the left edge and some pixels start to clip or I might go a touch farther and increase the area of pure black a wee bit. Some images, especially black and white photos, benefit from noticeable areas of pure, rich black. Make sure that small triangle in the upper left of the histogram is active (tap the J key to toggle them on or off). That’s the Histogram Clipping Indicator which will show (in blue) all pixels that are pure black. In the photo below, the red arrow points to a cluster of pixels highlighted in blue, showing that they are clipped. You can also see that the histogram has run up against the left edge, which also indicates clipping, and that the Histogram Clipping Indicator is illuminated.

Another way to set your black point in Lightroom is to hold the ALT (Option on a Mac) button while moving the Blacks slider. That will temporarily turn your image solid white. As you move the Blacks slider to the left, pixels that are clipping will start to show as black. (If you see colored dots before any black ones appear, that means those particular color channels are starting to clip. Depending on your image and your intent, clipping a color channel might not be a problem.)

TIP: If you want Lightroom to set the black and white points for you, there’s a nifty keyboard shortcut. Hold the SHIFT key and double click on the word “Blacks” or the word “Whites.” Lightroom does a pretty good job with this but you may have a different vision for your photograph and want to tweak the sliders a bit more.

The Shadows slider, on the other hand, adjusts the darker areas that are not black, letting you bring them closer to pure black or open them up to reveal more detail. It controls a lot, but not all, of the dark areas because it protects against clipping. It is at its best in bringing out the features and textures from dark shadows and when your subject is backlit, but is also helpful in darkening silhouettes. It will not, by itself, give you deep, rich pure blacks or as much contrast enhancement as the Blacks slider.

One way to illustrate the difference is to crank your Blacks slider all the way to the left and see how much of the image goes pure black, indicated here by the blue clipping warnings in the image. As you can see, much of the rock around the waterfall has gone pure black. 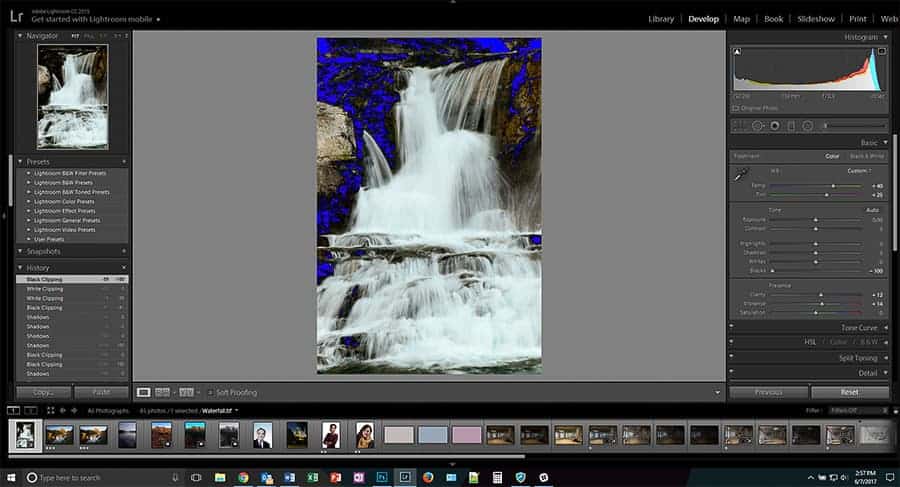 Conversely, if you ratchet your Blacks up to +100 the image will become somewhat lighter and your black point will move to the right. You will lose some contrast and the image will start to look flat. If, instead, you slam the Shadows all the way to +100, the image will become lighter, slightly more than at +100 Blacks, but it will have minimal effect on the black point so you will maintain most of the contrast. If your original black point just touched the left edge of the histogram, boosting Shadows will stretch out the left section of the histogram, but it will still touch the edge. The Histogram Clipping Indicator at the top left of the histogram stays illuminated in the example below, showing that blacks are still clipping.

The best way to learn what each slider can do is to experiment. Make virtual copies of a few of your images—one bright, one dark, one of average brightness—and have at the sliders. Move one, then the other. Study the effects each slider has and how they work together. One of the big advantages of Lightroom is that edits are not destructive. So play around!

Some photographers’ workflow begins with setting the black and white points. Then they adjust Highlights and Shadows. Then they may have to tweak Blacks and Whites again or Shadows and Highlights until the image looks like what they envisioned.

As you’ll see, sometimes a little goes a long way. Opening up your shadows and bringing down your highlights to draw out every possible pixel of detail sounds good.  Sometimes you can take your Shadows all the way to +100 or Highlights to -100 and it looks great.  But sometimes you can overdo it and wind up with a very highly detailed but flat and unrealistic image. Adding contrast and saturation also sounds good, but push your blacks and whites too far and you have a garish, overdone, cartoon-like picture.

So spend a little time getting to know your Blacks and Shadows sliders. Like the seasonings in a pot of soup, the right mix in the right amounts elevates the flavor to a whole new level.

4 thoughts on “Shadows vs Blacks Sliders: How They Affect Photos Differently”