If you have looked into flash photography at all, then you surely know the name Westcott.  When I was first shopping for new flash modifiers,  Westcott was the first place I went as they were the main name I knew and they have a reputation in the industry for producing high quality lighting gear.  Their website has about everything you could want.  From eight different categories of lights to accessories, backdrops, props and modifiers.  The great people at Westcott sent me four of their modifiers to test out (in addition to reflectors, a deflector plate and light stand).  These modifiers are slightly more expensive than the cheaper brands I have primarily used in the past so I wanted to put them through some good use to test their durability, ease-of-use and ultimate results.  If you don't care to read the full review, my ultimate conclusion is that Westcott has its reputation for a reason.  All the gear was very well made and a joy to use.

The Rapid Box was a fun soft box to use.  It was very high quality and durable.  It felt much different than the 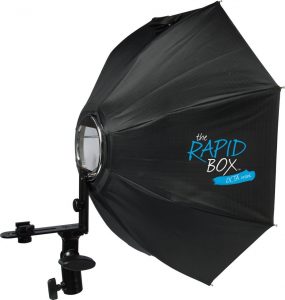 cheaper soft boxes I have used.  In essence, the Rapid Box is a black umbrella with a silver interior.  It comes with a heavy duty speed ring attached to the umbrella.  Within the umbrella is a mount that easily attaches the separate deflector plate to create a beauty dish.  This set up permits you to use the Rapid Box as a normal soft box or as a beauty dish.  The white diffusing cover easily hooks around the outside of the box, which I preferred to the more common Velcro method as it was faster to attache and looked nicer.  Finally, the Rapid Box comes with a very solid L-shaped mounting bracket that holds the speed light and is easily adjustable to fit any speed light in the Rapid Box.

As you would expect, the 20″ Rapid Box is not very big.  This is great for transporting it and setting it up.  It comes in a nice bag and sets up very quickly as it is basically like setting up an umbrella.  The bracket attaches easily and adjusts without trouble.  It is probably the easiest set up I have every used for a soft box.  The issue I had is the small size of this Rapid Box means you do not want to get the box to close to the subject unless you are using the flash on a low setting.  I found the best results shooting with the box about four feet away from a single subject.  In most of my shooting, I found the best results with a white or silver reflector opposite the Rapid Box. 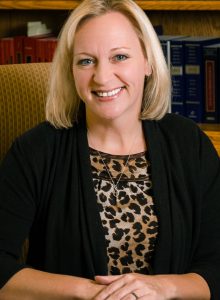 The image to the left was made using the Rapid Box, without the deflector plate, placed about four feet to the front and right of the subject.  The Westcott silver reflector was held just to the left of the subject to try and fill in some of the shadows created by the light.  You can see a bright white light is the result.  I found it 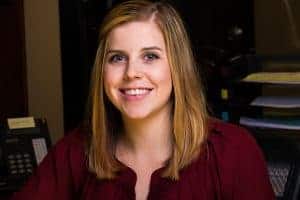 necessary to warm the images up whenever I used this box.  That was only an issue when the background was warmer than the subject, as in this image.  If you want a nice white light, this is a great set up.

The image to the right was made using the Rapid Box with the Deflector Plate.   This image was made in a small office so the Rapid Box was only about 20 inches from the subject, who was holding the gold reflector in her lap, reflecting the light back up into her face.  Although the light was harsh at his close proximity, I was able to shoot on fairly low power and used the gold reflector to warm up the light hitting the subject, which otherwise was a very cool light.  The beauty dish performed as it is supposed to (which probably isn't the best for corporate images) by really sculpting the face and bringing out those hard edges and preserving the shadow around the jaw line.  The gold reflector really brought out the highlights in her hair and made the light more pleasing.

You can currently pick up this Rapid Box on Amazon for $149.  You can also add the matching deflector plate for $20 or look at their kit options where you can purchase a Rapid Box and deflector plate together.

This modifier was probably my favorite to play with even thought it was the most awkward of the four.  This kit is 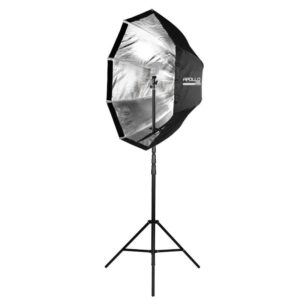 perfect for someone starting from scratch as it includes everything you need except the speedlite.  It includes a light stand, which is an absolute necessity if you are going to be using off-camera flash. When I first started, I tried to get by using an old tripod and I didn't realize how burdensome it was until I got a light stand.  Now, this light stand is what you would expect to come as part of a kit.  It is smaller and I would not ever use it with this large soft box in the wind.  Indoors, it worked just fine.  It was great for smaller spaces and was very easy to use.

The Apollo Orb is really just a giant umbrella with a silver inside.  The kit comes with a flash bracket that holds an umbrella, which is great for beginners as you will want one of these for shooting with an umbrella.  The umbrella then has an opening where the light stand goes through and you mount the speedlite so it is shooting into the umbrella and reflecting back onto the subject.   It also comes with a white diffuser that attaches to the front with Velcro.

I really enjoyed using the Apollo Orb because it created a huge, soft light that was really easy to work with.  The two issues I had using it is that it is very big for how small the light stand is so it was awkward to move around.  I had no concerns about using it inside, but outside would be a bit nerve racking. The other problem is you are not able to get the light above the subject or even very high given the nature of how it attaches.  As long as you are aware of those limitations, you can use it in most situations and get really great results. 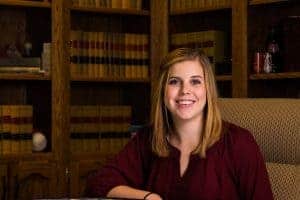 The image to the left was made using the Apollo Orb about three feet from the subject with the silver reflector on the table pointing up at the subject.  In retrospect, I should have used the gold reflector due to the warm background to match the light better, but I was working fast as this person was not available as long as the others.  This light was great for capturing more than a head shot as it creating a big soft light.  Comparing it to the beauty dish, you can see the light is softer, but the jaw lines aren't quite as defined.

This kit is currently available on Amazon for $149.  Given that it includes the light stand and umbrella bracket, I feel like this is a great starter kit for someone looking to get a big soft box.

This is a smaller softbox that compares favorably to what you would expect from other softboxes.  The biggest 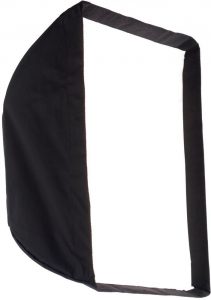 downside here is that it does not come with a speedring.  The speedring is the metal ring the rods or ribs of the softbox attach to, leaving an opening for the flash.  For this reason, I would not recommend it for beginners that do not already have a spare speedring and don't want to incur the additional expense.  If you already have a speedring, then this is a great softbox.  It is made out of really nice materials that feel like they will hold up well.  It is easy to set up and comes with 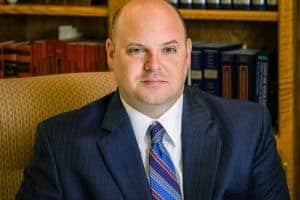 two levels of diffusers that easily attach with Velcro.

I don't have a lot to say about using this softbox.  If you have ever used a softbox, you know what to expect.  This soft box gives you great results with the durability and quality you would expect at the price point.

The image above was made with the soft box placed about four feet from the subject with a silver reflector placed opposite the light.

The softbox is currently available on Amazon for $139.

This is a great umbrella.  The materials are great and it is really well put together and was more durable than many 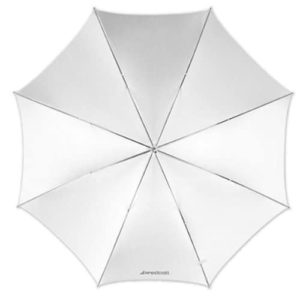 other umbrellas I have used.  I would have no qualms spending a few dollars more on this umbrella to get one that I am confident is going 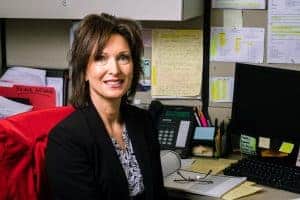 to last a long time (especially when the difference is really only a couple dollars from the cheap brands).

The image to the left was made with the umbrella placed about two feet from the subject with no reflector.  You can see the umbrella spreads the light quite a bit more than the other modifiers as the background here is almost as bright as the subject.

This umbrella is currently available on Amazon for $20.

This is a great reflector.  What is great about this kit is it comes with two diffusion panels.  The single cover has 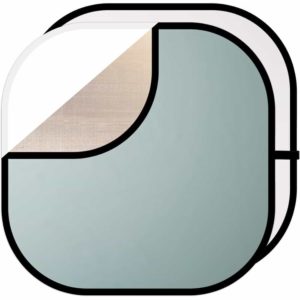 gold, silver, gray and black to cover the range of what you need for almost any portrait shoot.  Having two diffusers comes in handy on just about any shoot as you can use one opposite your light source and one under your subject or you can use one to diffuse natural light and one to reflect.  While this reflector is a bit more expensive than  others, including ones offered by Westcott, that second diffuser is hugely valuable and the quality of this reflector is superior to what you see in the cheaper brands.  One other nice perk is the extra size of 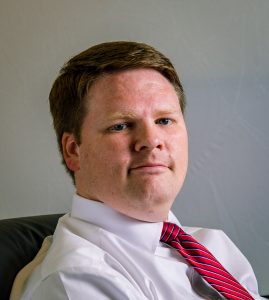 this reflector and the rectangular shape allows more useful positioning.  It also makes it easy to use it as a background for head shots as needed.

For the image to the left, I was struggling with a distracting background until I threw up one of the diffusers from the reflector behind the subject to act as the background.  I was then still able to use the other diffuser and the silver reflector to bounce some light.

This Reflector is available on Amazon for $99, but they have the more traditional round reflectors for much less.

As you can probably tell, I was quite impressed with the gear from Westcott.  Every piece I used was exceptionally well made and very durable.  The only negatives I experienced were the light stand being a little difficult with the size of the Apollo Orb and the Softbox not coming with a speed ring.  Other than that, all the equipment was easy to transport and set up very quickly.  I was also happy with the results for the most part.  I don't have a lot of experience shooting corporate shots, but I had a lot of fun testing all this equipment in a professional setting and was please with the results.  The law firm originally requested the images be taken outside because the last photographer did not use a flash and the inside images were less than satisfactory.  Using this gear, the lighting inside was much better than the harsh afternoon light outside.

Let me know what modifier interests you the most or what modifier you have that you like the best.  If you have any additional questions about this gear, I am always happy to discuss.

5 thoughts on “The Best Westcott Light Modifiers Reviewed and Compared”