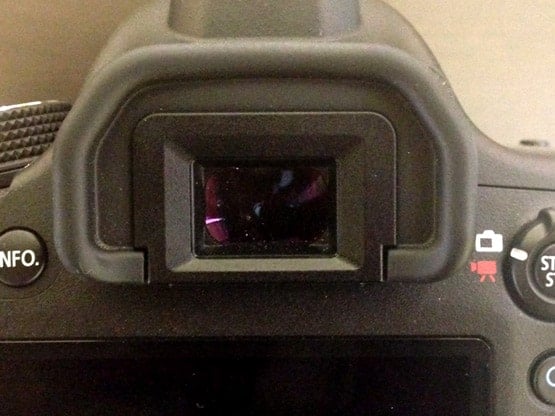 EVF stands for Electronic View Finder.  EVFs are a relatively new innovation in digital camera technology which was generally discouraged by most photographers when they were first announced, and now have become so good that many or most photographers prefer working with a camera with an EVF.

On a traditional DSLR camera, the image in the lens comes through the camera and is bounced up into the viewfinder by a mirror and a prism.  So what you see in the viewfinder is an actual, optical view of what the lens is capturing.  There are no electronics in this process–much like if you were looking through binoculars.

An EVF, however, is used on a mirrorless camera (click to see my recommendations of the top 10 mirrorless cameras under $1,000).  On a mirrorless camera with an EVF, the light from the lens goes straight to the imaging sensor which records the data and shows a preview of what the sensor captures on a tiny little TV screen viewfinder.  It's basically just a tiny version of the LCD screen on your camera when shooting in live view mode.

What are the Benefits of a Camera with an EVF?

I didn't like the EVF cameras when they were first released.  They were laggy, which means the preview of what you see in the screen is a split second behind what is happening in real life.  This makes action shooting difficult.  They were also small and didn't have good resolution.

Drawbacks of an EVF

There are benefits and drawbacks to using an EVF on your camera, but personally, I would never want to go back to a traditional mirror setup.  I LOVE the EVF of my Fuji XT1 (read here about why I switched from Nikon to Fuji).

I love the extra amount of data that the EVF can show me that the old mirror setup cannot.  While it can take a little time to get adjusted to having a little monitor preview if you're used to the mirror, I'd really encourage everyone to at least give it a try.  Once you get used to it, I think you'll be hooked as well.

4 thoughts on “EVF for Cameras: What it is, and 10 benefits of having one”