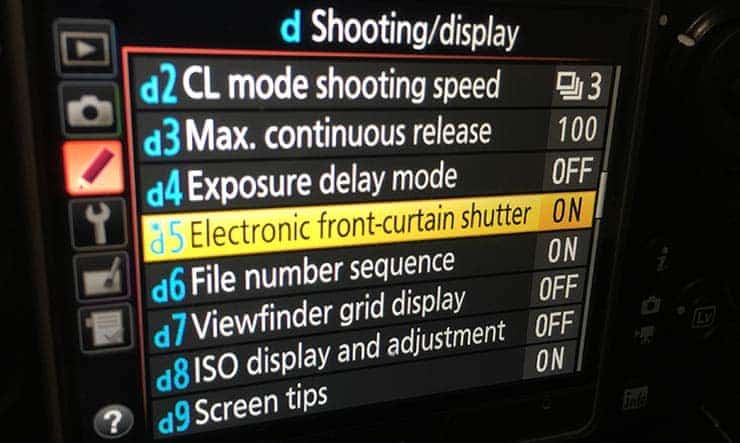 EFCS in cameras stands for “Electronic First Curtain Shutter.”  It means that instead of using both curtains in the shutter, the sensor itself scans the sensor to begin the exposure, and the second curtain is an actual, physical shutter curtain moving over the sensor.  The benefit of EFCS is that it reduces vibration in the camera body which can lead to slight sharpness improvements under certain conditions.

Electronic first curtain shutter does not improve the sharpness of all photos.  Its biggest impact can be seen at shutter speeds right around 1/5 or 1/10 of a second on most cameras.  At slower shutter speeds such as 1″ or at higher shutter speeds like 1/100, the difference is almost entirely academic and won't be noticed by any but the most scientifically-inclined photographers when zoomed in to 100%.

The reason that the 1/5 shutter speed often shows the most change by using EFCS is that it is slow enough that the vibration of the shutter has time to impact the sensor, but not so slow that the shutter vibration (which is very short in duration) affects only a tiny percentage of the recording time.

Because vibrations in the camera are magnified with longer focal lengths, the longer focal lengths will also show a much more pronounced difference from using EFCS on a shorter lens.  Also, in some cases, shooting in portrait orientation (camera up and down) can produce more of a difference using EFCS than shooting in landscape orientation (side to side)–depending on how the camera is attached to the tripod.

In theory, EFCS should be more effective at reducing vibration than mirror lock-up because MUP stops the vibration from the mirror but not that of the first curtain.  How much does that matter?  Very, very, little in a practical sense.

But I repeat that sharpness gains are largely academic and not visible except for when zoomed in to 100% under certain conditions.  For most users, the only practical benefit of EFCS is that the shutter is slightly quieter since only one curtain moves.

Another very slight benefit is that there is usually less lag between the time the shutter button is pressed and the time the exposure begins, but this merely shaves milliseconds off the time.

Few cameras use EFCS full-time.  On most cameras it is something that can be set in the menu, and is only active when shooting in mirror lockup mode (Nikon) or in live view mode (Canon and most other brands).

Also, EFCS does not work well with high speed photography because the sensor scan at the beginning of the exposure simply can't keep up with the speed of a physical curtain.  If it could, then there would be no reason for the physical shutter at all–our DSLRs and system cameras would simply use full-electronic shutters like those in our phones or point-and-shoot cameras.

Depending on implementation, it can also have significant limitations in different models.  For example, the Sony NEX 5n manual suggests not using EFCS with larger apertures, which is something that I'll have to ask about next time I bump into a Sony rep.  I don't quite understand how the larger aperture would affect EFCS.

Why First Curtain and Not Second?

For sharpness gains and sound reduction, it would really make no difference whether the first or second curtain were electronic.  However, this would provide no lag reduction benefit.

Also, there is a technical reason why the first curtain is electronic and the second curtain still is done only with a physical shutter in our more advanced cameras (again, cell phones and point and shoots have no physical shutter–both curtains are electronic).

The sensor cannot “turn off” or clear rows as quickly as it can read the rows of sensor data.  So as the sensor is scanned through the rows, the sensor cannot turn off the rows due to power remaining in the row longer than the time it takes for the camera to supply the power.  This engineering problem is why the first curtain can more easily be electronic than the second.  The second curtain would leave too much lag in the scan.

How to Activate EFCS

4 thoughts on “EFCS and Your Camera: What photographers should know”