Shooting basketball can be a tough job.  All those plays looked great while you watched them live.  Maybe you got so caught up, you even forgot to shoot some of them.  Heck, they even looked good on the back of the LCD.  Then you got home, and they were blurry, grainy, and not what you remembered.  Below are 20 tips to help you get the shot you really wanted using affordable gear.

1. Shoot with an eye open

The gym might look bright to you, but it doesn’t look bright to your camera.  You can put it in sports mode which tells the camera to prioritize high shutter speeds, but that still slows the camera down as it makes decisions about the exposure.  Also, having a consistent exposure makes your post processing easier.  I’ll share some exposure information below.

The gym might look bright to you, but it doesn’t look bright to your camera.  You can put it in sports mode which tells the camera to prioritize high shutter speeds, but that still slows the camera down as it makes decisions about the exposure.  Also, having a consistent exposure makes your post processing easier.  I’ll share some exposure information below.

4. Open up the aperture

As wide as it will go (smaller = wider, I know it seems backwards, just trust me).  You want to get as much light onto the sensor as you can.  We can talk about focus issues down the line.  They are manageable.  I shoot at f/2 most of the time.

5. Shoot with a prime lens

Look up the best sports lenses and your likely going to find yourself directed to the 70-200 f/2.8.  Warning, if you’ve never taken time to drool over this lens, there may be some sticker shock.  I love the 70-200, but not necessarily in the gym, plus that sticker shock might kill you.  I have to give up a full stop to shoot at f/2.8 which can mean the difference between seeing blur and freezing the action.  Most cameras from the past few years have enough megapixels to crop and get a usable image so I don’t really need the zoom.  You can try shooting with an 85mm 1.8 (about $400 and also great portrait lens).  I’ve done it with a 50mm 1.8 with good results, although focus speed is sometimes lacking.

6. Shoot with a crop sensor

A crop sensor has better reach (because the lens is magnified by a factor of 1.6).  Shots out to the three point line still look great when cropped.  The other bonus is that a crop sensor has a greater depth of field.  This is usually considered a hindrance of a crop sensor, but if I’m shooting at f/2, in a fast paced environment, I need that extra depth of field.  I can’t speak to Nikon, but the Canon 7D (soon to be replaced) has a faster burst rate than the 5d Mk iii.

If you want to freeze the ball and the player, you will need fast shutter speeds (unless you are shooting with flash). That is how the picture below was taken. 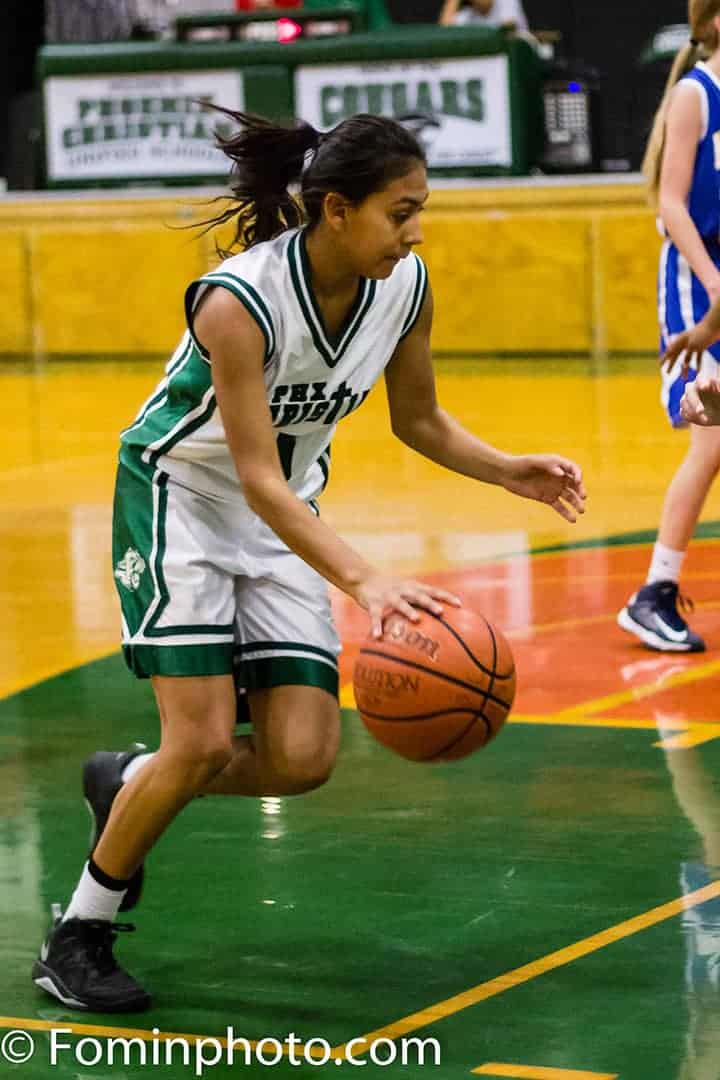 This doesn’t sound very technical, but there is a spray and pray aspect to sports photography.  You don’t know when that magnificent play or expression is going to happen, so you have to keep shooting.  Burst mode helps to make that happen by shooting multiple frames per second.

All that advice to shoot in RAW and I’m here I am telling you to shoot jpeg.  I love RAW, I shoot RAW most of the time, but not in the gym.  RAW shots will fill the buffer on all but top end cameras very quickly.  Since you’re shooting in manual, and gyms usually avoid a lot of outside light, you won’t really find the need to recover information from a big RAW file.  It also makes selecting and processing hundreds of shots much faster.

It’s a vertical game and if you don’t shoot vertical, you will lose the ball and the basket all the time.  Anticipate that the game will move up in your frame.  Leave some space for that to happen.

This is crucial for getting shots in focus.  I generally use the center focus point for sports.  My goal is to keep that focus point on whatever I am shooting.  Using multiple focus points causes the camera to make a decision and it often decides on the closest subject.  This doesn’t work on a crowded basketball court with a shallow depth of field.

12. Switch to the bottom focus point for high school boys

By the time they get to this level, the boys start getting pretty tall, have long arms, and can really jump.  They also are moving very quick in order to beat another athlete.  If they are jumping out of the top of your frame, account for it by switching to the bottom focus point.  I find I use this the most when shooting from a low position or trying to capture a dunk.

This is called AI Servo on a Canon and AF-C on a Nikon.  This is crucial for sports because the players are often moving toward or away from the lens.  Normal focus involves the camera setting the focus and then taking the shot.  Continuous does just what it says and continues to focus.  This is a crucial setting for most sports, so don’t forget it.

14. Use back button focus

15. Focus on the Drive, let go on the jumper

When a player is driving the basket, the distance between you and the lens is changing.  This is when you want to hold down your focus button so that the camera continues to adjust the focus.  During a jump shot, the player’s distance to you is static.  With practice you can quickly get the player in focus with the back button, then let go of the button while the jumper is taking place.

The following series of photos, which eclipses less than 2 seconds, illustrates several of the tips from this article.  Each was shot at 1/400s, which is the slowest shutter speed I would suggest using for sports.  Burst mode, continuous focus with a selected focus point, and shooting vertical were all necessary to make these shots work.  Finally, all of these were cropped, which I often find necessary for sports photos. 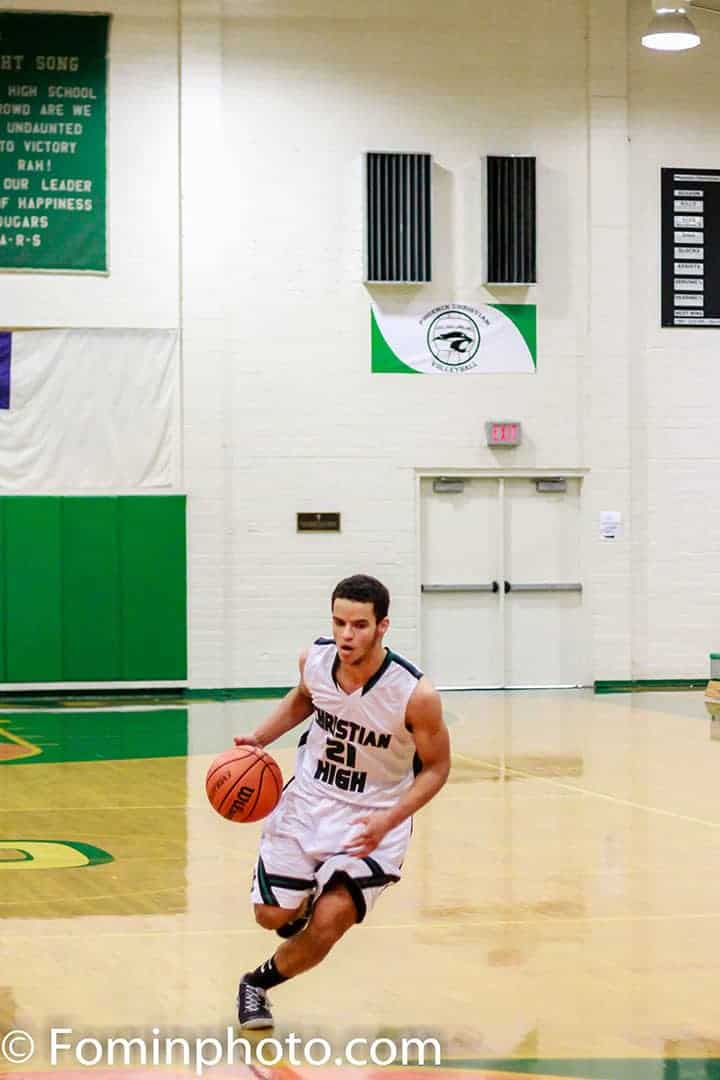 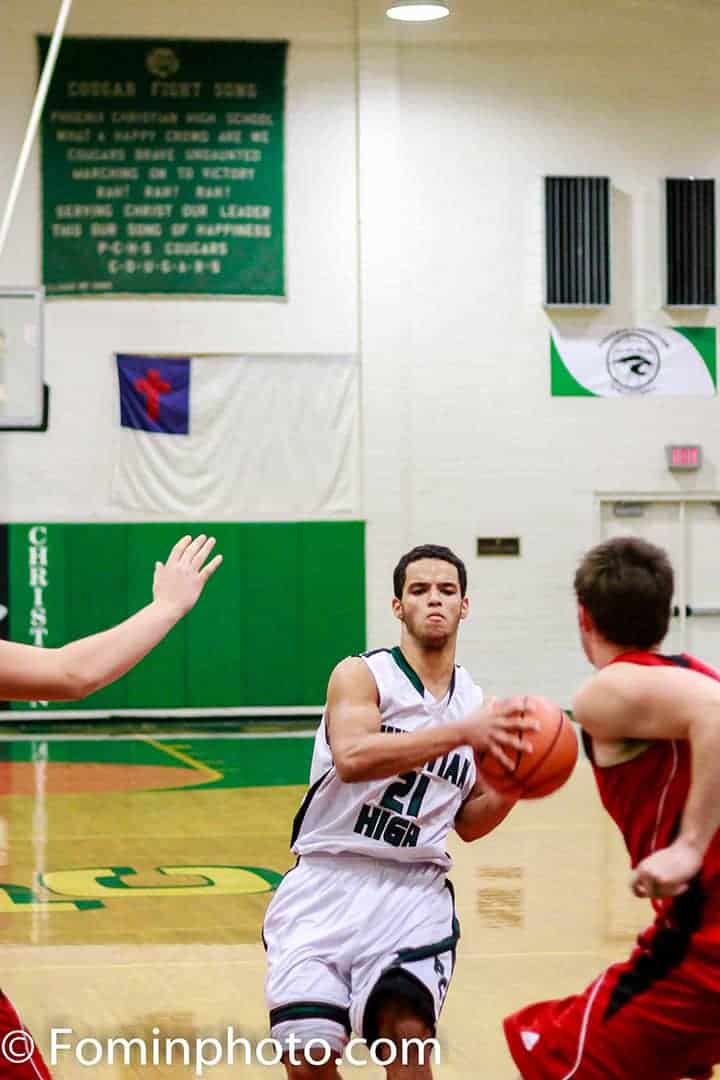 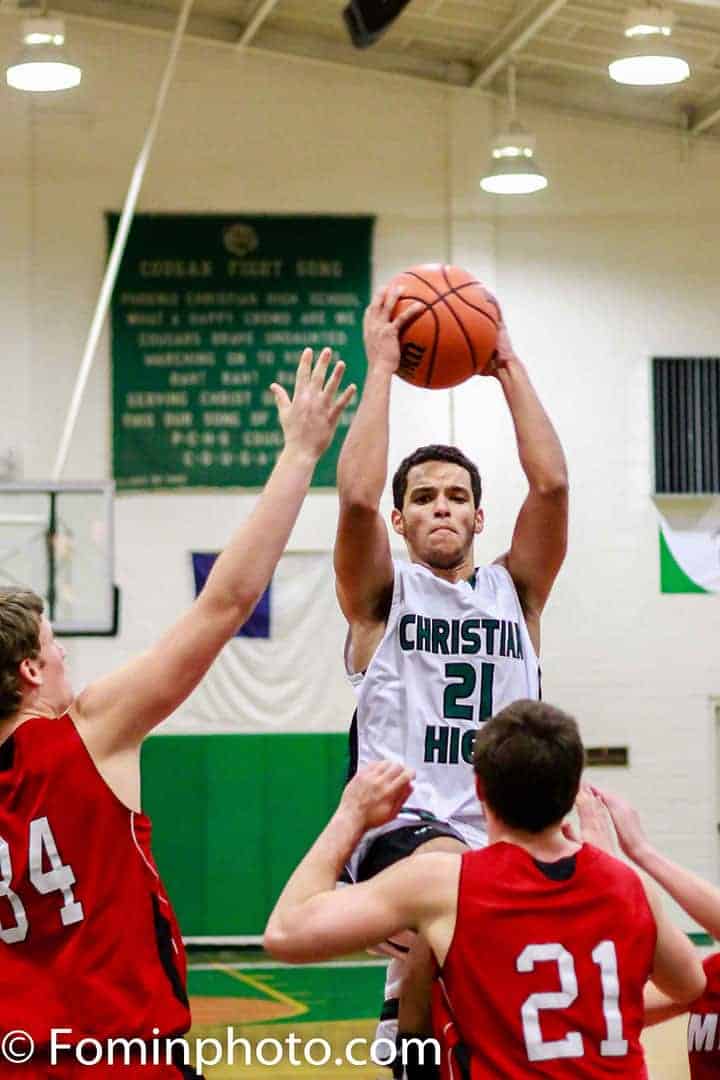 16. Shoot the offensive side of the court

Whichever team you are trying to shoot, you want to shoot on their offensive side of the court.  Let’s face it, defense may win championships, but the offense is going to dominate Sportscenter tomorrow.  Take your cue from the pros and shoot from the offensive side.  Hint: You can sneak in some interesting defensive plays when a team moves into a full court press.  This scenario also tends to bring out a lot of emotion at the youth level so keep your camera moving and looking for the shot.

17. Shoot from the player’s weak side 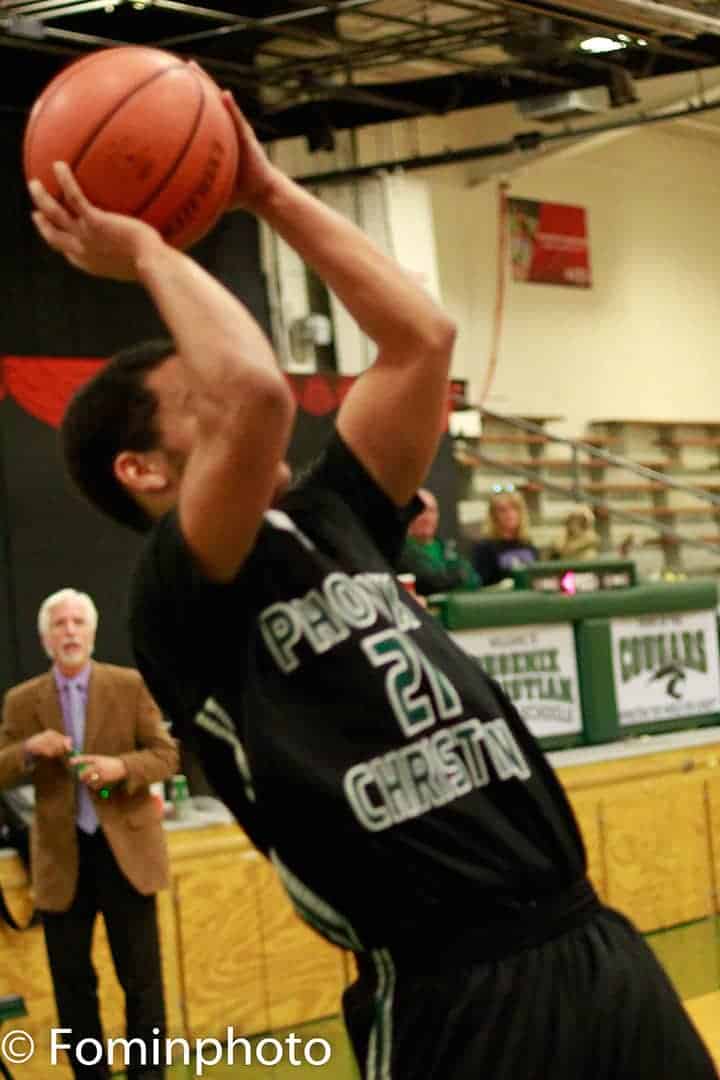 Sit or squat so you are shooting up at the players.  It makes the players look bigger provides a different perspective.

Are you trying to capture a player that scores on breakaways, three pointers, in the paint?  An outside shooter calls for a longer lens.  A post player may be right handed, but prefers to spin to their left.   A certain player may be more expressive than others.  Some players are defensive specialists, while others drive and go to the ground often.  No matter what you are shooting, you’re always trying to tell a story.  Find the story and the emotion in the game if you want to get the shot.

Just because a basket was scored doesn’t mean the play is over.  Players express emotion, pain, frustration, and determination after the play has happened.  Don’t miss these moments.