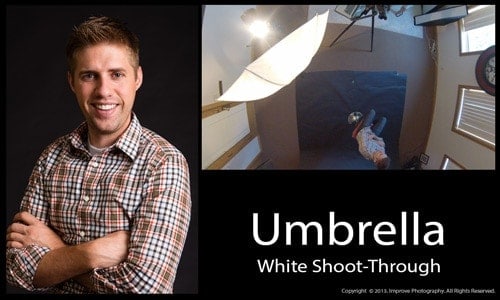 This article is page eight of a series of articles about the basics of flash photography.  To start at the beginning of the tutorial, click here.

Now you have a flash, you can shoot it wirelessly off-camera, and your first test shots will look terrible!  You will remember from lesson one that a flash alone will create hard light because it is a small light source.  A speedlight is only about 4 inches (10 centimeters) in diameter, so it will always be a hard light source when used without a lighting modifier.

I will walk you through a light modifier comparison and show you the type of light you can expect to see from each one. In this exercise, everything remained consistent so you can see the differences in modifiers: the light is in the same place, the flash is at the same height, the model remained still, etc. Hopefully this will help you decide what to put on your flash the next time you go on a photo shoot.

Before we begin, you should know two things: (1) If you look through these example photos and feel like you can't really tell the difference between some of them clearly–don't be surprised!  Just like how your Uncle Henry has a thousand different sizes and shapes of screw drivers, photographers often have many different light modifiers to create a slightly different look in a photo.  It will take time using them before you learn what the best tool for each situation is.

(2) Please do not look through these examples and find the one that looks the “best.”  We placed the light in such a way that it would show off the quality of light from the light modifier, and NOT so it would look pretty.  Each of these lighting modifiers has a place in your arsenal of tools. 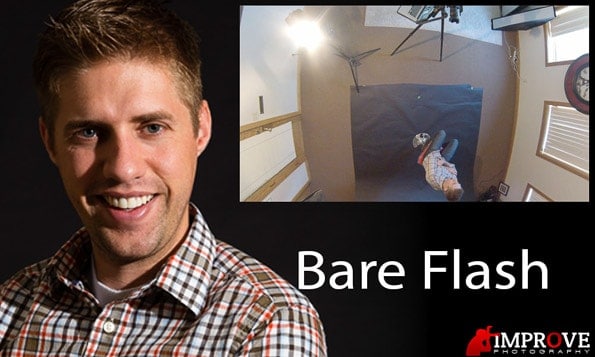 This photo shows hard shadows to the left of the nose. The small light source makes the transition from highlight to shadow too hard for most portrait photography uses.

Do you see how hard the shadows on the left side of the model's nose? This is hard light. There is no gradual transition from highlight to shadow, which makes this lighting distracting and also shows off texture in the face.

This is a light modifier comparison, so we have to start off by seeing what the light looks like without a modifier on it–for comparison! 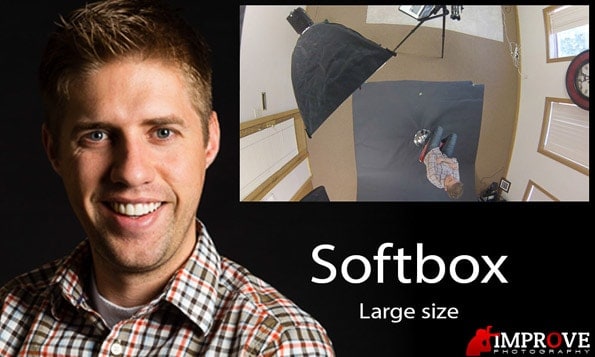 The softbox is a very popular light modifier because it creates light of medium softness (depending on the size of the softbox). The main benefit of a softbox is that it is controllable. The shape of the light allows the photographer to decide what will be hit with light and what will NOT be hit with light. (Click to enlarge)

This provides softer light and does a better job of wrapping around the edges of the model's body. By moving the flash a bit closer to the model (and by turning down the flash power), we would see even softer light. 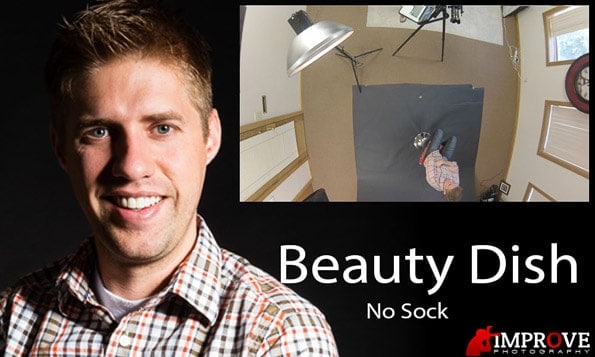 A beauty dish is intended to provide a beam of light. The ideal way to use a beauty dish is by placing it on a boom stand, up high, over the head of the photographer. The beauty dish without a diffusing sock is merely a bare flash turned into a larger light source. 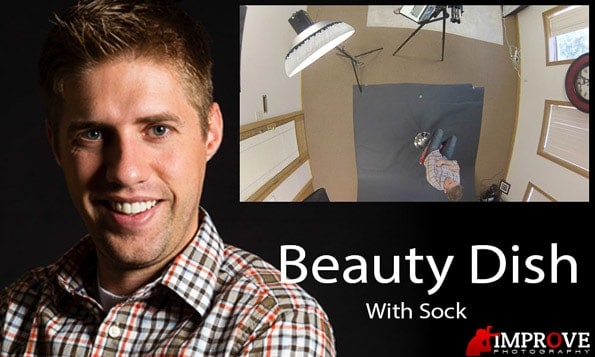 As you can see, the transition between highlight and shadow is far more gradual with a sock on the beauty dish. Still, the beauty dish is a very edgy light which shows shape well. (Click to enlarge)

Used in the same way as mentioned above, this time we have put the diffusing sock over the beauty dish. There is a big difference in the quality of light: it has the same feel, but with softer light. 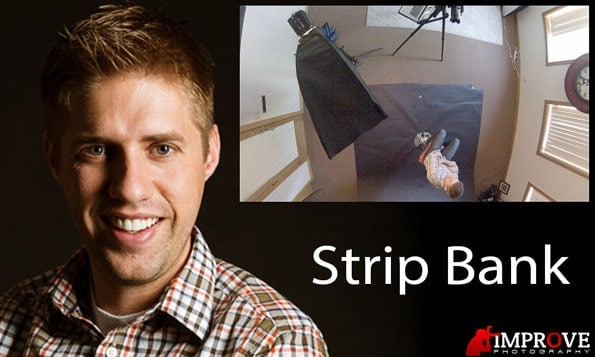 A strip bank would never be used as a key light, but you are able to see here what the light looks like. It is a soft column of light with little horizontal spread. (Click to enlarge)

A strip bank is not intended to be used as a key light, but can be great for side lighting or using as a hair light. 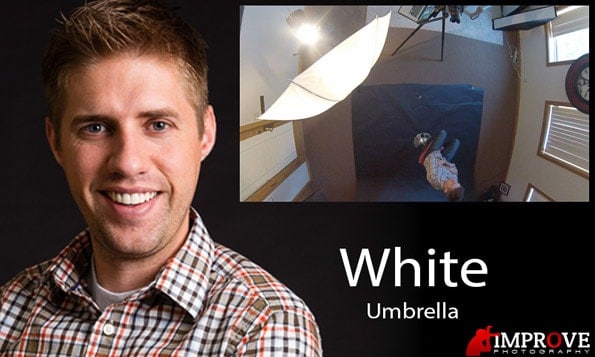 The white shoot-through umbrella creates a very soft light because of the surface area of the light modifier, but also notice that the light spreads across the face and illuminates the face more evenly. This is mostly caused from the light bouncing off walls in the room. I have heard white umbrellas described as “light bombs”, because they throw light everywhere! (Click to enlarge)

A white shoot-through umbrella is an absolute must for your first lighting modifier. Umbrellas are easier to work with and make it easier to achieve good light on your model. 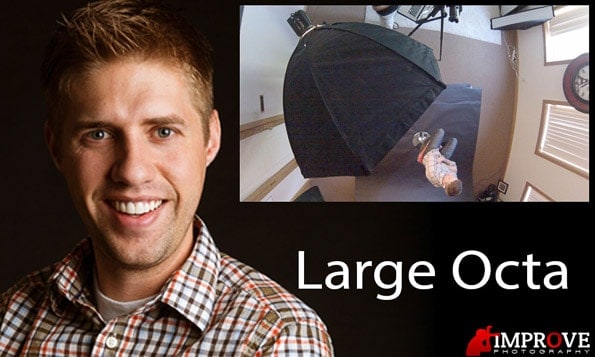 This is a MASSIVE light modifier. The octabank creates soft light because of its sheer size, and photographers love the octagonal highlights it puts in the eye.  Also notice that the left side of the face is left in shadow.  Unlike some of the other large modifiers pictured here, the Octa contains the light a bit better to make it controllable. (Click to enlarge)

This is a 60 inch (152 centimeter) octabank. It's HUGE! Because it is so large, the light falls off the model very quickly. It creates interesting light that can be a lot of fun to play and experiment with. 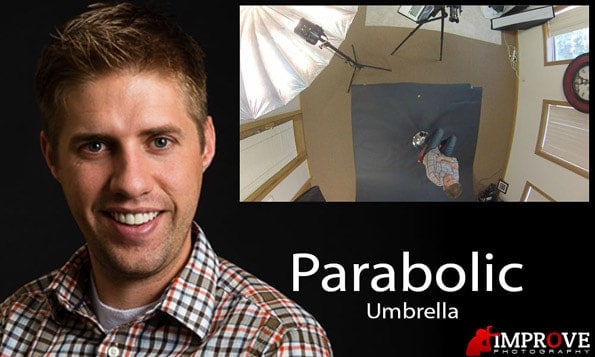 I can only describe the quality of light from a parabolic umbrella as “shiny.” It is a large modifier, but it's shape is such that it sends out more of a beam of light than most lighting modifiers.  (Click to enlarge)

This is REALLY BIG! Because it is so big, you will probably need even more space than you need for the octabank.

In the next article in the series, you'll learn some of my go-to lighting setups for flash photography.