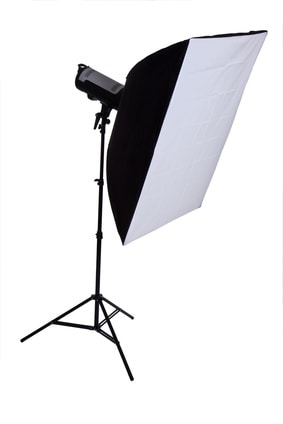 It’s a secret that portrait, product and commercial photographers have long known: the value of using a softbox in their studio photography.

In its essence, a softbox is nothing more than a light modifier. Oh, but what it can do!

A softbox diffuses the light into a pleasing soft, even light. When used properly, it reduces harsh shadows. The closer the softbox is to the model or subject, the softer the light appears, emulating window light. The shape of a softbox can vary from rectangular to octagonal to square to a long strip of light. A softbox is comprised of translucent cloth and attached to a light source (usually a studio strobe or speedlight) on a light stand. The cloth, white or silver for the interior and black for the exterior, is wrapped around a wire-framed box covered over the front with a diffusion panel. The black exterior prevents light from spilling out and reflecting back in the studio.

The light emanating from the strobe or speedlight is bounced around the fabric box and scattered in all directions inside the box. The sides of the box direct the light outward. The light flooding out of the box is evenly distributed from top to the bottom of the box. Softboxes come in a variety of sizes from small hand-held attachments to large wall-size modifiers. Smaller softboxes are more portable than their larger counterparts and are therefore great for on-location shoots.

But whether you haul out a large softbox or opt for a smaller, more portable one, the area of coverage is generally about the same size (assuming, of course, that the light modifiers are the same distance from your subject). There is about a 1-1.5 stop falloff on the sides as the light wraps around your model. The sweet spot for softboxes is generally about six feet away from your model or subject.

But why have different sizes? It’s all about the quality of light. Large softboxes cover a broad area with undefined shadows. Medium sized softboxes provide slightly harder shadows. And small softboxes throw off harder and well defined shadows in the background. Often a grid or egg crate is attached to the front of a softbox (usually with Velcro). This accessory, which looks like a honeycomb, gives the photographer a little more control over the light with a narrower focus on the subject and less spillage on the background.

Because of its variety of shapes, a softbox is considered a workhorse in the studio. The traditional rectangle shape can be used with a main light source or a fill light. A strip bank is great for a hair light, and an octobox works like a charm as a key light.

4 thoughts on “What is a Softbox?”