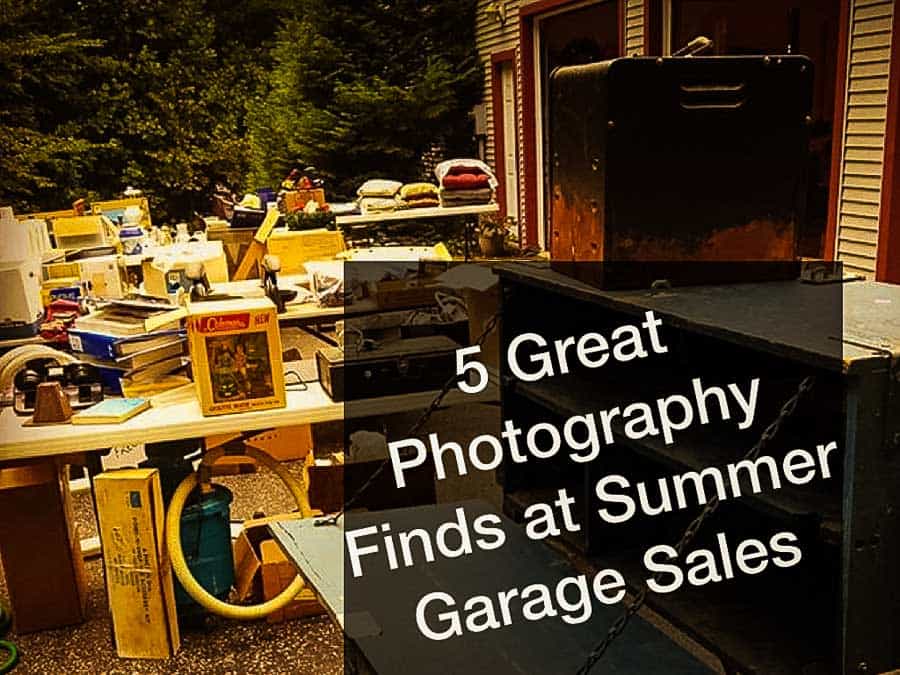 Summer is a time to get outdoors. A time for camping, baseball, picnics, boating and beaches. School is out and family vacations are just around the corner.  It's also a time to clean out your garage! That means garage sales (or yard sales, tag sales, rummage sales–depending on your locality) where your trash becomes someone else's treasure.  And the flip side of this is that somewhere, someone else's trash may be well on its way to your treasure chest.

Used photography equipment can be a fun target for treasure-hunting at garage sales, if you have some idea what to look for and you're willing to take a risk on used equipment.

Generally, I don't think that shopping for photo gear in garage sales is the same as looking on eBay or online classified ads. I've written about both selling and buying online. Generally, online sales are more likely to be gently used gear, which has still retained much of its value. Online used photo gear sellers are more likely to be experienced photographers or even retailers that pay attention to quality and use. They often have owned or cared for the gear since it was new, and understand that photographers are wiling to pay more than pocket change for a lens, body, or accessory that has been well cared-for.

Garage sale sellers are looking to make room for a new bass boat.

For example, a typical exchange between a buyer and seller of a lens on eBay starts with a detailed eBay ad explaining the aperture, the focal length or range, age, and detailed images of the quality of the glass. Buyer then follows up with questions about the speed of the auto-focus, whether the model has an Image Stabilization feature built-in, and whether there are any filters included in the sale.

The garage sale opportunity, usually includes a conversation that looks a bit more like this:

Buyer: Do you have the body that came with it?

Seller: Body of what?

Seller: You mean the camera part?

Buyer:  Yes, the . . . camera part. This lens was probably sold with a camera body, too.

Denise: [Looking up from re-folding a Bob the Builder onesie for the third time since 6:00 AM] What?

Seller: This guy wants to know if the camera came with a body?

Wanda: I dunno. Whatever we have out there is what we have out there. The camera stuff used to be my brother's. He lived with us after he got divorced and before he remarried that hairdresser, Vanessa, from Terre Haute. [Turns to Seller] Did you ever meet Vanessa? She was a real piece of work. She borrowed my husband's truck to help her son move and brought it back with no gas and a broken tailgate. So you probably know more than I do.

Buyer: About the camera or Vanessa?

Anyway, you get the idea. Garage sale proprietors have other things to worry about. So don't get frustrated if you don't find innovative and high tech gear, like sliders, gimbals, and drones. On the other hand, you won't break the bank at a garage sale, either. Before you go, there are a few things you might want to consider bringing with you, like your camera, a flashlight, and a magnifying glass. Your camera is obviously important for compatibility issues. The flashlight and the magnifying glass can come in handy to inspect photo gear inside buildings.

Here are 5 of the prizes to keep your eyes peeled for during the garage sale season.

If you hit the garage sale circuit, you're likely to find many, many kit lenses. Sometimes with the body, sometimes not. The odds are pretty good that if it was packaged with a Canon rebel (film or digital) some time between 1990 and 2005, it will be available in a garage sale.

You might want a lens to try out a DIY project you saw in Pinterest. It's worth $10 at a garage sale to avoid risking your fast 2.8 lens by fixing it to PVC pipe for a homemade lens tube. You also might get a chance to underwater photography some day. The guy on the beach who rents the housings also rents boogie boards, sells Piña Coladas to tourists, and said the word “bruh” on the phone three times while you were trying to get his attention. Do you really trust him with keeping saltwater off your good lens? Cheap kit lens to the rescue. The cannon fodder of photo warfare.

What to look for.

Need an extra tripod that doesn't have to be particularly durable? Garage sales are stupid with extra tripods. Many of them were originally purchased to video piano and ballet recitals, so they often aren't lightweight and are rarely backpack friendly. But if you're looking to pick up some cheap stands for studios, or you just want to buy a near-disposable tripod to put in the middle of a creek, you'll find one in a garage sale.

Technology moves at the speed of light–or at least the speed of Moore's law.  Moores' law formally holds that the transistors in an dense integrated circuit double every two years. It has been extrapolated as a general principle of the advancement of computers, and even more generally to technology.  The first scanner that I purchased in high school took about 15 seconds to scan a small image, like a 4 x 6 photograph. The result was a pixelated (think GameBoy generation 1) black and white image. Today, have a Fujitsu ScanSnap on my desk that can scan 25 color, two-sided pages a minute with more pixels one could imagine.

This is one of the trade-offs that's easy to forget in the age of digital photography. Film cameras simply did not reach obsolescence as quickly. While a standard SLR from 1990 didn't have the auto-focus capability as a similar SLR from 2000, the technology was not as dependent upon microprocessor capability. Thus, while outmoded, it was not yet outdated.

Camera bags have little that can make them truly obsolete. I like to use old, smaller camera bags for power packs and flashes. If it holds camera gear, it will be dirt cheap at a garage sale near you. I don't think you can have too many camera bags. When I travel by air, I pack my most important/expensive/delicate camera gear into the Pelican 1510 (which I reviewed not long ago). Then, I put other items and non-photo gear essentials into a camera backpack and have another photography backpack for my wife to use on the flight. When we arrive, I unload everything and I have three different options for getting around: a Pelican, a large backpack and a small backpack.

This might seem counter-intuitive. Garage sales are only going to have light modifiers if a semi-serious photographer is looking to sell off his collection, right?  Wrong. Think outside the soft box, my friend!  Where is it written that if you buy a light modifier at a garage sale, the prior owner had to use it as a light modifier?  Broaden your imagination a bit. Umbrellas, pillow cases, Tupperware.  Almost anything that you could pass light through becomes a light modifier if you're committed.

So what if the light blue umbrella at the garage sale was never on a light stand. It's still an umbrella, isn't it?  If you want to use it as a light modifier, you'll never have a cheaper chance to pick up odds and ends. If you like being creative with light modifiers, look through Pinterest before you go to get some DIY ideas.

Though you're probably going to be working in digital imagery for the foreseeable future, you don't want to be the mom-trashed-my-great-beaseball-card-collection guy in thirty years. You should keep some proof that film photography actually existed, especially now that Canon isn't even making film cameras. If you don't protect these memories, will your grand kids even believe you when you tell them how film cameras worked?

Except for the earliest of cameras models, cameras don't take up much space. It's not like collecting motorcycles or recreational vehicles. I've seen beer stein collections that were larger than the apartment I had in law school. If society is already nostalgic about mid-1990s Nokia telephone designs, how much more exiting would it be to have a camera collection? Why not pick up a couple of film cameras for posterity?  You might even get your  grand kids to think that you're cool.

But by the time 2018 rolled around, you inherited your Dad's old telescope. You live in the City and it's never really dark enough at night to see much anyway. Plus, you're converting the garage into a craft brewery that adds obnoxious flavors like black licorice and avocado to perfectly good beers. Who needs you? Sell this underappreciated piece of classic optical tech and boyhood wonder to a photographer looking to build his or her equipment arsenal.

If your summer involves bargain shopping at the occasional yard sale or garage sale, don't assume you can't find any good deals on photo gear there.  Are you going to walk home with a like-new Canon 600 mm f/4.0L lens?  Not likely.  Of course, you're also not going to spend four grand at a garage sale, either. Garage sale bargains aren't about finding perfect merchandise. It's about finding something that's worth a little more to you than it is to the seller. And maybe rekindle some of the imagination and appreciation for photography that got you interested in the first place.