The earliest photographers made monochrome images.  That was their only option.  Today, the general public expects photos to be in color and monochrome is seen as the infrequent option.  So why would you make a “black and white” photo when the world is in color and color photography is so easy?  Here are a dozen reasons you may want to Make it Monochrome.

Our modern digital cameras are invariably set up to make color photos.  To make a monochrome photo we either have to use special camera settings or convert an already captured color image into monochrome with editing tools.  The point of this article is not to discuss techniques for doing those things, there are already many good articles discussing tools and techniques for that.  Instead, I’d like to talk about why you might want to make a monochrome image instead of a color one. 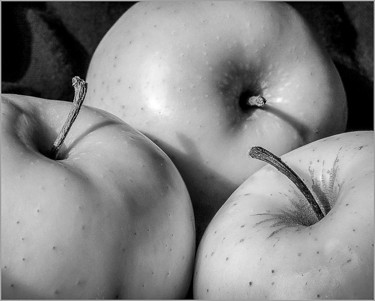 Without the color in a photograph, we are left with images represented by their shape, form, and tone.  This gives much greater emphasis to the essential ingredients of an image, taking away distractions and helping keep the viewer's attention on what the photographer wants to communicate with the image.  Sometimes architectural photography can make good use of this concept where the message of the photo is all about shapes and lines.

An extension of the idea concept above, monochrome lends itself well to photos where the maker wants to greatly simplify the subject.  Minimalistic images and often abstracts are often well represented in monochrome.

A good way to help determine whether a photo is well-composed is to temporarily reduce it to a monochrome, even when your final intent for the image may be color.  With fewer distractions, it can be easier to see where the concepts of subject placement, balance, positive and negative space, leading lines, curves, perspective, and other compositional concepts work.  You may also find that a strongly composed image is better rendered without the color so that the compositional elements stand out more strongly without the distraction of color.

“Light makes photography. Embrace light. Admire it. Love it. But above all, know light. Know it for all you are worth, and you will know the key to photography.”

Working in monochrome, you will find it probably is easier to “see the light,” to see properties such as highlights, shadows, intensity, direction, degree of hardness or softness, how it falls off over distance, reflections, refractions, diffusion, and so forth.  Yes, one property of light is color and it’s important photographers understand that as well, but removing that attribute can often help you better see the interaction of light on your subject .

Without the addition of color, a photographer will sometimes find a monochrome an excellent way to emphasize the texture of an object.  This could be with subjects with rough textures, such as old weathered wood, or very smooth and almost non-textured features.  The play of light and tone in a monochrome image is often an excellent way to communicate the texture of a subject.

Because we know that monochrome images were what was made in the past, most people equate monochrome with concepts of history, nostalgia, retro or “oldness” of subjects.  For example, we could certainly take a photo of a historic steam train in color and while that might make a compelling shot, making it monochrome and perhaps even giving it a sepia tone would help communicate to the viewer that this is an old subject and even perhaps that the photo was taken in the past.  Many “old” subjects translate well in monochrome.

You may have heard the term “Fine Art Photography,” but do you have a good definition for it?  I have searched to find one and have not found anything absolutely definitive.  The closest I have come speaks to the intent of the photographer and the purposefulness in making the photograph.  The idea is that rather than simply capturing a realistic rendition of the subject the photographer seeks a more personal, evocative, or atmospheric impression.  Fine art photos are those where the intention of the photographer is primarily Aesthetic rather than Scientific, Commercial (i.e. product photos) or Journalistic, (photos with news or illustrative value.)

So what’s that have to do with monochrome?  I would say that because in this day where color is the norm, photographers who make monochrome images may be more intentional in their work and are purposely choosing that style to create an aesthetic photograph.  That is not to say there are no color Fine Art photos, but only that monochrome often communicates the qualities of Fine Art.

I’m sure we also are influenced by motion picture and early television monochrome.  Study the lighting in old black and white movies or old TV shows and you often will see that without color to work with, lighting and film directors were masters in the use of monochrome.  Because our visual familiarity with those works as well as the photography of early icons like Ansel Adams and his famous photography contemporaries, we tend to equate monochrome photography with the “classics.”

In the studio, we can create the lighting to suit our needs and capture our vision for a subject.  Landscape photographers don’t have that option.  It would be nice to always go shoot when the light is great, but say the day and time you are at a location and ready to shoot the light is flat, gray, and boring.  You could opt to pack up and quit or…you could explore monochrome!   One of the great qualities of a monochrome subject is it can better explore the contrast, be it high or low, of a subject.  A shot that might be blah in color can be rendered and worked to become a great monochrome, which takes us to the next point…

9. Crank up the drama

Monochrome images can often be taken further in editing for more dramatic looks.  Dodge and burn, make local adjustments, try some HDR, make an image extremely contrasty or give it a very low-contrast high-key look and you’ll get away with it.  Trying those same techniques on a color image might make it garish, surreal, or “overcooked.”  Monochrome lends itself well to creating “mood” in an image.

I once had to edit some images taken by someone else in an indoor setting where at least three different light sources were being used, all with different color temperatures.  To make it worse, they were posed people shots and the skin tones were just awful.  The topper was they’d been shot as .jpgs and so there was no readjusting the white balance in edit.  Try as I might, the color was just plain ugly.  Arghhh!  The only solution?  Make ‘em monochrome.  You may not be dealing with something like that, but sometimes the best solution to fighting color that just isn’t helping your shot is to forget about it and go monochrome.  Mixed light sources, reflected light of a color unflattering to the subject, (think green foliage light on a person’s face), or other color “gotchas” are sometimes a no-win battle.  Don’t fight, switch, to monochrome and you may find you still have a great shot with no color at all.

A good photograph causes the viewer to look at what the photographer wants them to look at.  Things that distract from that are well… distractions.  Say you’ve taken a great shot of a person but in the background is a screaming red object, the color just crying “look at me!”  Yes, you could work to tone down the brightness and saturation of the distracting object, but maybe the solution is to eliminate the distraction by eliminating the color.  Then use other means to put the focus on your intended subject.

The opposite of that concept is what we sometimes see in photos where the photographer uses a spot color treatment.  Think about those shots you’ve seen where the entire photo is monochrome, but there are a few spots of color where the photographer wants you to look.  Now, you won’t have to look hard to find many articles like “Why You Should Never Use Spot Color,” or “Things Photographers Hate” in reference to spot color calling it a cliché.  Maybe, but then while I’ve never met anyone who really likes anchovies on their pizza, I know places still offer them for those that do.  You’re the photographer, do what pleases you and your clients.

A great reason to do monochrome photography is it’s different, something that perhaps you’ve never done or rarely do.  Because it will get you out of your box and force you to look at the world differently may be the best reason to do it.  I have heard photographers who regularly shoot for monochrome say they now have the ability to “see in monochrome.”  They have trained themselves to mentally eliminate the color from a scene in their minds and have a good idea when they look at a subject how it will look as a monochrome.  Now, if you’ve not yet learned that technique, here’s a way to help – 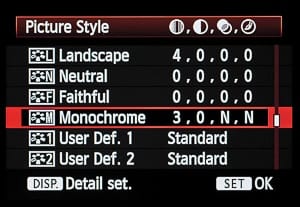 Some people will go to additional steps saving both the color Raw and a monochrome .jpg file as well (Raw + .jpg).  This saves having to edit the Raw file into a monochrome if you decide to go that way.  If you really want to emulate the days of shooting monochrome film, set your picture style to Monochrome, shoot Large/Fine .jpg only and cover your LCD screen. (There was no “chimping” in film photography!).  You'll only know what you got when you get the images in your computer and there will be no going back, monochrome will be all you have.  As for me, I prefer working with the Raw even if I do want a monochrome because of the flexibility and control that offers, but that’s another lesson for another day and another article!

Whatever your reason for doing so, I hope you’ll start thinking about making more mono images!

9 thoughts on “A Dozen Reasons to Make it Monochrome”