The historical importance of a photograph can be measured by how well it is recognized by the average person—neither historian nor photographer. If the “man on the street” sees a photograph and recognizes its context and the significance of its context, that’s an achievement. Few photographs are more widely recognized and have had a greater impact on events than Raising the Flag at Iwo Jima by Joe Rosenthal.

In a previous Photo History article, we examined the work of Civil War photographer Matthew Brady. Today, we recognize the work of Joe Rosenthal (1911-2006), the photographer who captured the famous WWII image Raising the Flag at Iwo Jima.

As famous as the image is, there are some things you might not know about Raising the Flag at Iwo Jima:

After the marines first raised a smaller flag, the Colonel in charge had a larger flag brought from one of the naval vessels surrounding the island of Iwo Jima. Joe Rosenthal was not present for the first flag raising. He noticed the larger second flag, folded, being brought to the top of Mount Suribachi, the highest point in Iowa Jima and its chief geological feature. It was even a source of irritation among some that the initial flag-raising–and the men in uniform who remained relatively anonymous–never received the recognition of the men in Rosenthal's photo.

2. U.S. and Japanese forces would fight the battle of Iwo Jima for another month after Rosenthal's image was taken.

Perhaps because raising a flag is so commonly associated with victory and the wartime necessity of claiming territory, the modern viewer might assume the February 23, 1945 photo came at the end of the brutal battle. However, the US forces–mostly Marines, but also Navy personnel–were still early into the battle of Iwo Jima, which lasted from February 18 to March 25, 1945. The main prizes of the island were the three Japanese-controlled airfields.  Although the Marines had superior numbers, Japanese forces had the advantage of preparation. They had fortified their positions with tunnels and bunkers

3. Three of the flag raisers shown in Rosenthal's photo died in the battle of Iowa Jima.

Corporal Harlon Block, Private First Class Frank Sousley, and Sergeant Michael Strank were killed in action at Iwo Jima. This is a stark reminder that not only was the Rosenthal image not the end the battle of Iowa Jima, but the Marines suffered devastating losses there–6,821 killed and over 19,000 wounded.  Japan suffered by some estimates three times as many dead.

4. Two of the flag-raisers in the image were misidentified for many years.

But the second misidentified figure, first thought to be Navy Corpsman John Bradley, took a bit longer to identify. Bradley did not discuss his war-time experiences readily. John Bradley died in 1994. His son James conducted interviews with all of the families of the soldiers involved in the flag-raisings at Iwo Jima. James's book, Flags of our Fathers, is considered by many to be the definitive work on the subject. It was adapted into a 2006 film, which was directed by Clint Eastwood.

The Marines released an official statement in 2016 that acknowledged that the figured believed for years to be John Bradley was actually Corporal Harold Shultz. Both Bradley and Shultz were present for the first flag raising, but Shultz also participated in the second.

5. Rosenthal was the first person to be awarded the Pulitzer for a picture in the same year it was taken.

Rosenthal was awarded the 1945 Pulitzer Prize for photography.  This was the first time the prize had been given in the same year in which the image was taken. This is certainly a testament to the public's desire for contemporary news from the front. It featured a determined, and successful (if not yet victorious) American fighting force and the public was thirsty for news of success in the Pacific that would speed drawing the war to a close.

6.  The image served as inspiration to US troops and aided the war effort.

The U.S. would later make use of some of the men credited with raising the flag to sell war bonds. This seems also to demonstrate not only the public's need for war news, but the war effort's need for effective propaganda.

Reportedly, President Franklin D. Roosevelt himself saw the potential of the photo in the efforts to help pay for the war. The bond drive, known as the Seventh War Loan Drive, raised more than $26 Billion, almost twice what was expected.

The surviving flag raisers, Rene Gagnon, Ira Hayes and (then supposed) John Bradley were assigned by the War department to help sell the war at home. They gained a measure of fame from the famous photo. They even appeared for cameos in the 1949 film, the Sands of Iowa Jima.

Unfortunately, tragedy followed one of them home. Ira Hayes, (pictured farthest to the left in Rosenthal's image) suffered from survivor's guilt and alcoholism. He died in 1955 at the age of 32 from alcohol poisoning and exposure. His story later became a 1951 film, The Outsider, in which Tony Curtis portrayed Hayes. His tragic life also inspired the eponymous folk song, The Ballad of Ira Hayes, which was written by Peter LaFarge and performed by Johnny Cash.

It is a further poignant irony that when Gagnon–the first to be shown an enlargement of the photo and asked to identify the others–reportedly refused to identify Hayes on the grounds that Hayes had warned him not to. Only when he was taken to Marine Corps headquarters and informed that President Roosevelt himself ordered the identities released did Gagnon identify Hayes. Perhaps if the fog of war had caused Bradley to be mistaken for Hayes instead of Shultz, Hayes's story would have had a happier ending.

8. Rosenthal was accused of staging the photo.

This arose from some confusion about a subsequent photo. After the second flag-raising, Rosenthall asked the marines to pose for a “gung ho” group photo. After he had returned to Guam several days later, he was asked if the photo was posed. Mistakenly believing that the person asking the question was referencing the “gung ho” photo, Rosenthal indicated that it had been.  This led a Time-Life photographer to tell his editor that Rosenthal's famous flag-planting photo had been staged, a charge which Rosenthal was forced to refute repeatedly for decades.

Sergeant Bill Benaust, a Marine photographer, was shooting motion-picture film a few feet away when the Rosenthal photo was taken. This video shows the event as it unfolded and also serves to defeat any characterization that Rosenthal's famous image was staged. 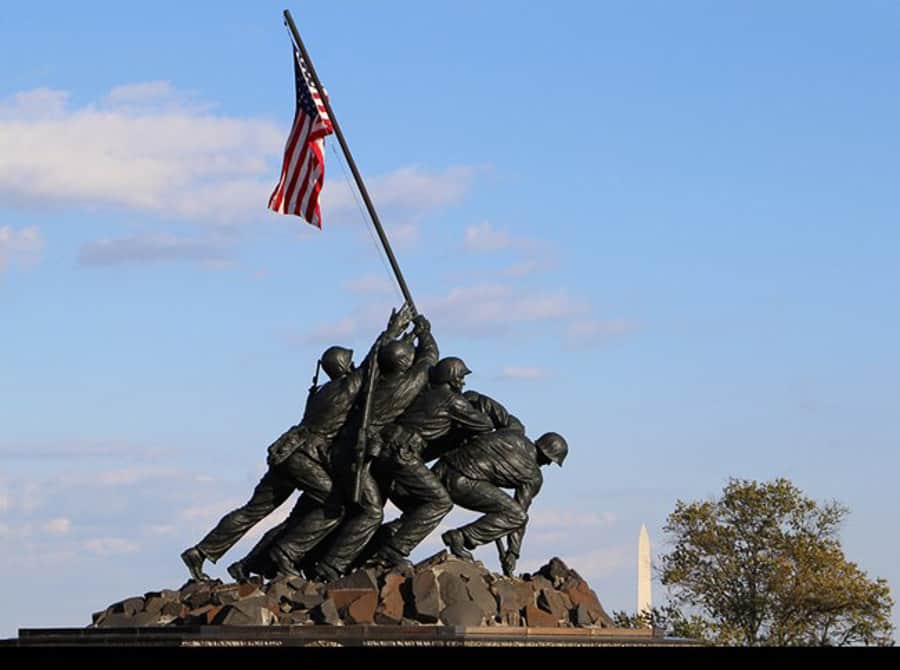 9. The man who would later sculpt the Marine Corps Memorial in Arlighton, Virginia recognized the potential of the photo instantly.

Then Petty Officer Felix de Weldon was stationed at Patuxent Air Station in Maryland on Saturday, February 24, 1945–the day after Rosenthal's Raising the Flag at Iwo Jima was captured. The Captain on duty pulled the image off the wire and gave it to de Weldon to review.  De Weldon was an immigrant from Austria and had studied painting and sculpture.  He was mesmerized by its classic triangular lines, similar to sculptures he had studied. He took to his clay and tools and within 3 days had replicated the event.  In 1951 de Weldon was commissioned to design a Marine Corps memorial. Hayes, Gagnon and Bradley posed for him, and he used their faces as models and based the deceased soldiers' faces on photographs.

Having already missed the initial, smaller flag raising, Rosenthal placed his Speed Graphic on the ground, hoping to pile up some rocks to stand on for a better angle. The Marines (and the Navy Corpsman Gagnon) started raising the flag. Rosenthal quickly swung the camera up without using his viewfinder and snapped the photo. Years later, he wrote:

Out of the corner of my eye, I had seen the men start the flag up. I swung my camera and shot the scene. That is how the picture was taken, and when you take a picture like that, you don't come away saying you got a great shot. You don't know.

Rosenthal reported that his Speed Graphic was set to 1/400 sec., with an f-stop between 8 and 11.

War and the Image

It’s no coincidence that the most famous works of both Rosenthal and Matthew Brady appeared during times of war. War is always fraught with consequence–historical, personal, and emotional. So it always presents opportunity to capture images that overflow with consequence–with significance. Consider the famous LIFE magazine photo cover of the sailor kissing a woman at the close of WWII (or, in this case, my photo of a sculpture in San Diego made in the image's likeness): 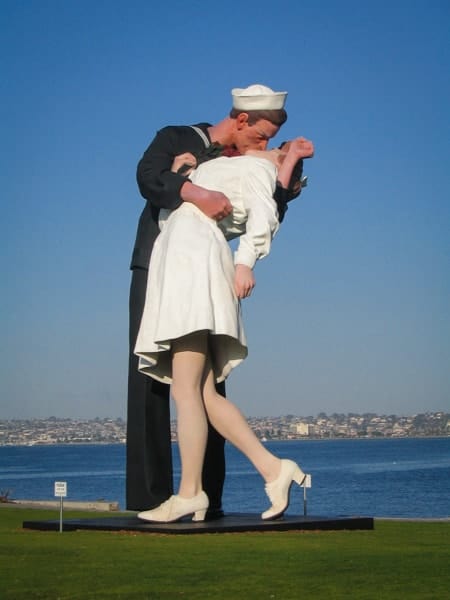 What if this photo featured a man in a baseball uniform instead of sailor’s garb?  Suddenly, it’s two people celebrating winning the World Series. It would still capture the embrace as a memorable, spontaneous and joyous event. But it would surely lack the gravitas of the end of war. Winning a baseball game—even a championship—only contrasts itself with the loss of a baseball game. War, being death, offers the contrast of life. In the same way, Raising the Flag at Iwo Jima depicted the struggle of war. Not just of a moment within war, but within one of the most an arduous, brutal battles of the twentieth century. A brief ray of light enveloped by darkness.

You never get away from the feeling of grabbing mother earth, and that first feeling of “What am I doing here?”

Consider how quickly Rosenthal's image became widely known–and how deeply ingrained it remains. First, there was the reporter who helped perpetuate the myth that Rosenthal staged the image, who was discussing it with his editor only a few days after it was taken. Also, Petty Officer and sculptor de Wheldon saw the image in Maryland the day after it was taken. That speed would have been unknown to WWI images. Add to this the fact that in the months that followed, the image's popularity helped raise billions for the war effort.  In short, Rosenthal's image went viral sixty years before going viral was a thing.

But it still wasn't out of steam. Rosenthal's hastened image became a sculpture to honor Marines. Then a postage stamp. Then the National Museum of the Marine Crops even used the image's shape as inspiration for its own design.

Thank you, Joe, for showing us what an image can do.

1 thought on “Photo History: Raising the Flag on Iwo Jima”