You may have heard the expression; “It’s all done with smoke and mirrors.”  The Urban Dictionary defines the phrase this way:

I hope in this article to indeed show you how to photograph smoke such that you can practice some photographic magic and show some tricky inventiveness.  As for the mirrors part, well… we’ll get to that a bit later.

Here’s what you will need to make your shots: 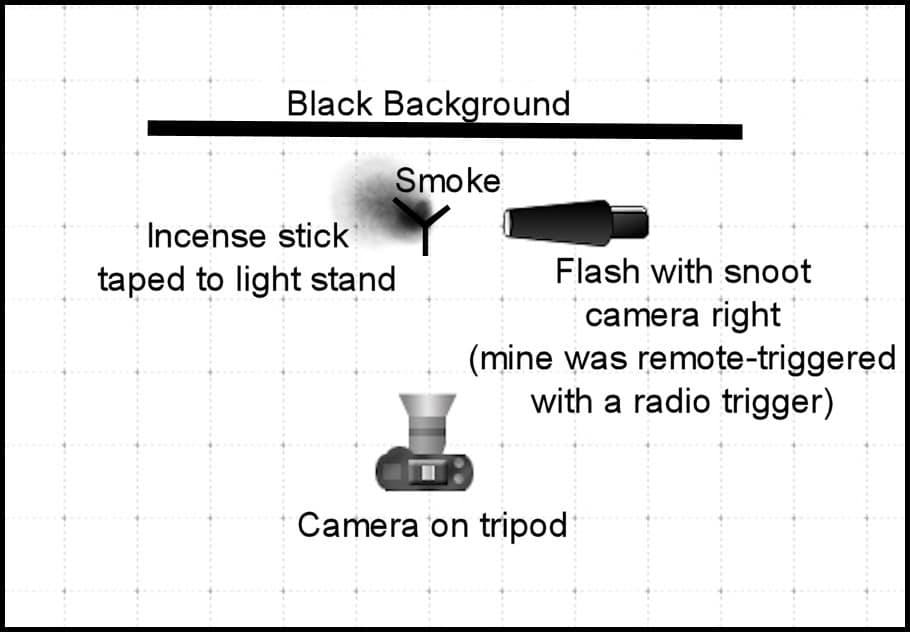 I placed the camera on the tripod.  I taped the base of the incense stick to a light stand. (Don't light it yet). My flash with a remote trigger was placed on a stand a few feet from the table pointing toward the stick at a 90-degree angle to the camera direction.  I put a snoot on the flash to keep light off the background, but still light where the column of smoke would be.  (I have heard of people putting a reflector on the opposite side of the flash to light the other side of the smoke column, but I didn't for these shots.)

Using a prime lens, I had to move the camera the right distance from the subject, the incense stick.  I framed the shot so only the very tip of the stick was at the bottom of the frame and I had about 4-feet above that in the frame where I expected the column of smoke to be.

I set the camera in manual mode, switched off the autofocus on the lens and manually focused on the tip of the incense stick.  (Be sure you prefocus and have autofocus off – if you don't you will have guaranteed frustration!).

Taking some test shots I determined the proper exposure was ISO 200, 1/60th second @ f/9.  I was of course shooting in Raw mode.  Shutter speed wasn’t crucial as the flash was doing the work.  My Sunpak 383  flash was set in manual mode with the output power set to 1/16th.

I was ready, so I lit the incense stick, blew out the flame and watched a thin column of smoke rise from the tip.  After that, it was simply a matter of firing off shots as the smoke curled up in all kinds of interesting patterns.  Occasionally I would gently blow on the column or wave my hand so the air would change the smoke pattern.  That’s about it for the photo portion.

The controls in Lightroom were my friend in tuning the images to get the looks I wanted.  I wanted deep blacks so only the white patterns of the smoke were visible.  I adjusted the blacks, whites, highlights, shadows, exposure, and contrast by eye, seeking the look I was after.  I then used the adjustment brush with the exposure turned way down to “paint out” portions I didn’t want.  If you are familiar with standard Lightroom editing workflow, you will know what to do here.

The simple white smoke patterns were interesting, but I knew I could do more.  I used Corel Paintshop Pro for the next phase, but Photoshop would certainly work too.  I brought in the image from Lightroom, and made a second blank layer over that.  Then I did different painting effects on that upper layer, sometimes solid colors, sometimes gradients.  I then used a blending effect on the upper layer, often “darken” so that only the smoke would be colored and the black would remain that way.  Other blending modes gave different effects.

Taking the creativity another step, I did some images where the image was copied, flipped, (hence the “mirroring” part), and then layered back on itself.  In a few cases, the image was mirrored and then placed alongside itself, sometimes with overlap.  For a few, I flipped the image both horizontally and then vertically.  I even reversed a couple to a negative image so that the background was white and the smoke was colored.

What I find fun in these is how they are like Rorschach Inkblots in that everyone sees them slightly different and finds images in what are really just random patterns of drifting smoke.  My titles reflect what I saw, you might see something different.

A less abstract way of using smoke in a shot is what I did with these peppers.  This was lit with two wireless flashes, one at either side of the vase.  Other than that, the setup was about the same with the incense stick placed in and behind the peppers.

Looks Can Be Deceiving

Finally, another trick I learned when you want to make “smoke” in a non-smoking environment.  Take a piece of dental floss, fray it out a bit, tie it onto a penlight or small flashlight and let the light shine down the floss.   Set your shutter speed to a longer duration; I used 6 seconds here.  Hold the floss over the subject with the light shining down the floss and onto the subject. Keep it in motion during the long exposure.  It might take a few shots to get what you like, but hey… smokeless smoke!  Tell me that isn’t some “tricky inventiveness!”