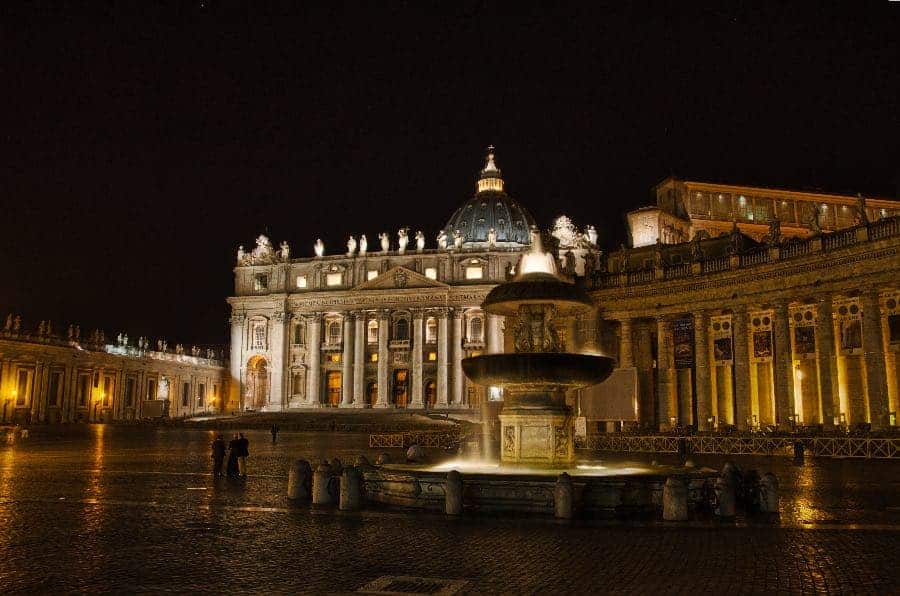 Have you ever found yourself in a photographic hotspot, yet found not nearly enough time to visit all the sites and take all the pictures you want?  Can you imagine being in Rome, which hosts over 4 million visitors a year and is one of the great tourist spots of the world, and only having a few hours to shoot?

With a lot of planning and a little money, you can shoot great sights of the world in a lot less time than you would think.  In fact, after reading how I managed to capture Rome in about 5 hours, you will find that you, too, can often do a lot with a little.

It was a few years ago and I was planning a vacation to Rome.  By nature, I do a lot of research and a lot of planning when I go on vacation.  And this trip to Rome was to be no exception. In fact, I’d say I easily spent double the amount of time on planning this vacation as I had ever done on any other vacation.  I was going to visit the Big 3 of Italy:  Venice, Florence & Rome, in that order. 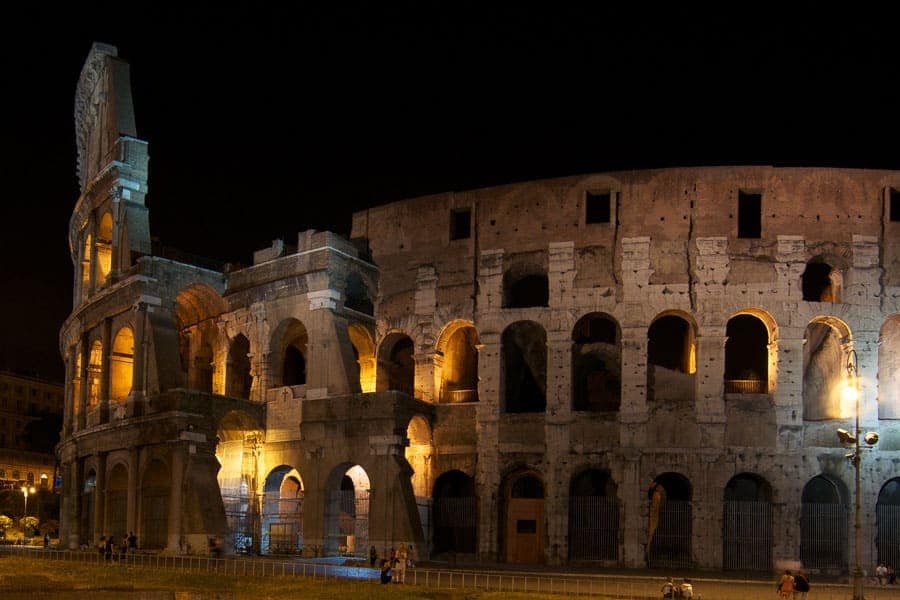 As I carefully laid out the itinerary, I found that while we had several days in Rome, our actual discretionary time in Rome was limited.  We had a half-day scheduled to tour the Vatican and another half-day to go to nearby Tivoli.  A full day was spent on a tour that would take us to the Amalfi Coast and Pompeii.  How was I ever going to get all of the great pictures I wanted from Rome?

As I began my research, I looked at a lot of websites that showed me pictures of Rome.  Looking at picture after picture, one common theme was a lot of night shots.  Many of the great historic sites of Rome are well lit and many of the iconic pictures we see are of these sites lit up at night. 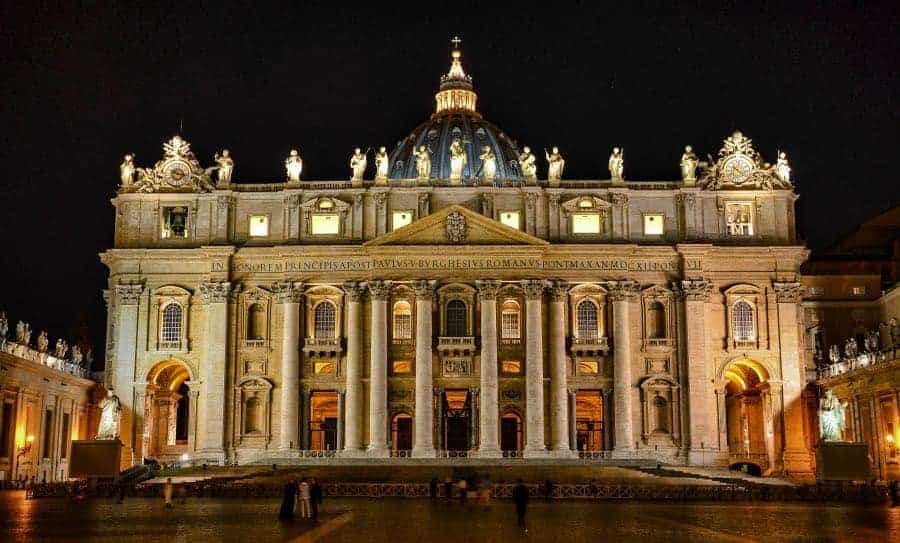 As I continued my research, I found walking tours of Rome at night.  It turns out these tours are popular, and many of the sites are within walking distance of one another.  I explored further and realized that my night shots would be long exposures and I would be bracketing my shots.  My camera (a Nikon D7000 at the time) would be set to apply long exposure noise reduction, meaning a 30-second exposure would take an additional 30 seconds.  So suddenly, if I took three shots at 30 seconds each, one right after another, I’d need three minutes with my camera shooting uninterrupted and without any interference.  I then imagined a tour group:  twenty or so people; a tour guide blocking my shot while s/he shared the history, and then everyone moving on to the next location before I was able to get my shots.  That wouldn’t work. 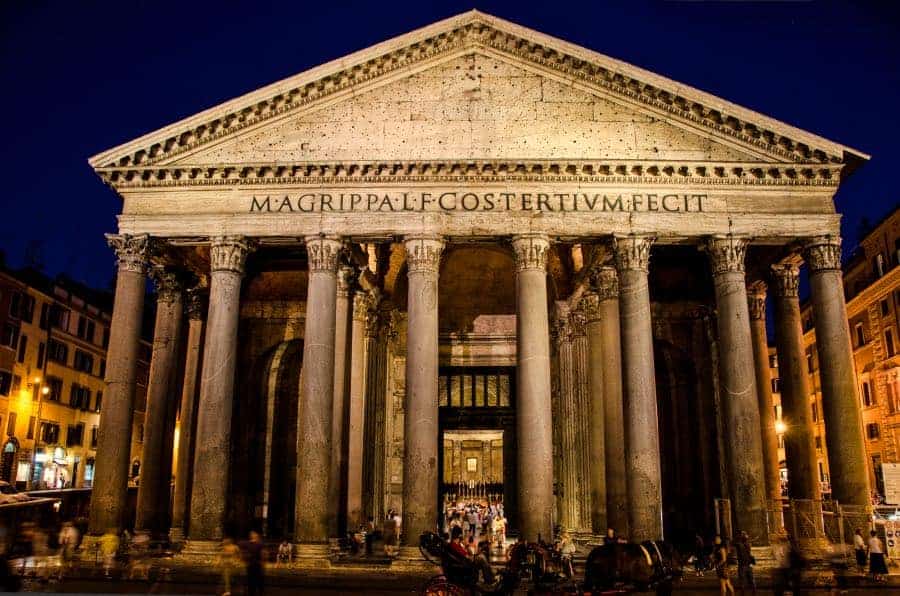 In desperation, I contacted one of the tour companies and asked what the cost would be for a private tour.  Obviously, it was more expensive, but not unreasonable in the context of the total cost of the trip and the importance to me of getting these shots.  I booked it and scheduled the tour to start about an hour before sunset.

Next thought was to plan the tour.  I used Google Maps and plotted out all of the sites I wanted to see.  I planned to discuss with the tour guide the most efficient walking route.  I also looked online at each site to determine which angles and “looks” were best for each icon.  (Yes, I know, I was a bit obsessive about this).

One thing that I also knew was important was that I didn’t want to be screwing around trying to figure out what I was doing and how I was doing it at each site.  There wasn’t time.  So I gave a lot of thought to how to minimize the time at each site.  My Nikon allowed me to set it up to take three pictures, bracketed, with one press of the button.  I could also set it up to take the picture two seconds after I pressed the shutter release, so I didn’t have to deal with a shutter release cable. One less thing to worry about. 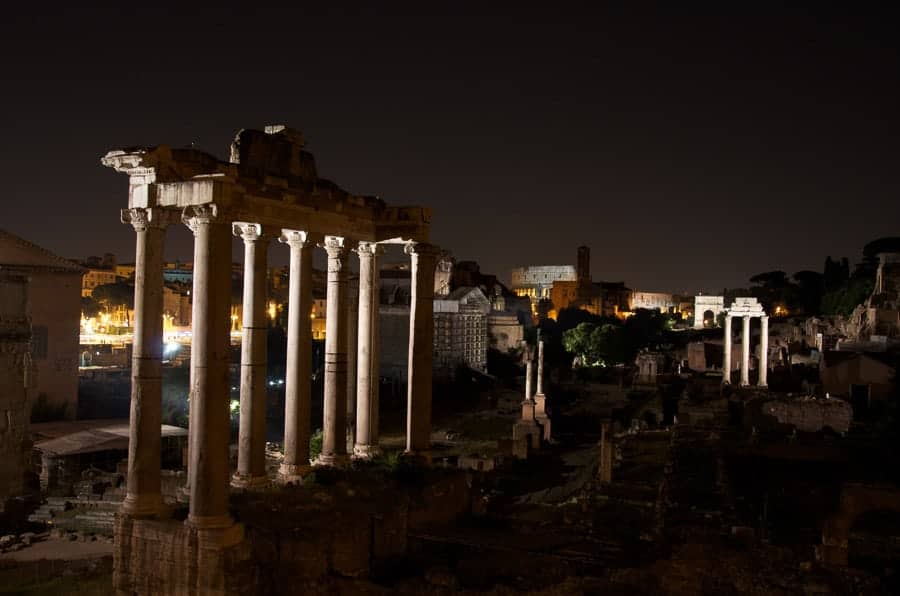 Finally, the day came.  Of course, not leaving anything to chance, I made sure to have extra cards, batteries, etc.  Camera lens was cleaned.  Correct lenses.  Off we went.

An unexpected bonus of our evening tour was the lack of crowds.  The big sightseeing crowds were during the day.  Not that we didn’t have people around, but there weren’t people in the way.  And at some places, such as the Vatican, the few people wandering around actually added to the ambiance of the photo – not at all like the crowds during the day which would have seriously detracted from the photo.

As we walked from attraction to attraction, once I put my camera on the tripod it stayed there – all set up.  As I approached each iconic site, I walked around a little bit to make sure I had the best location, planted my camera, and took the shot.  If in doubt, I took multiple angles of the same site.  I set up, aligned, focused, pushed the shutter button, and patiently waited as my camera took its three bracketed shots (had I had the Nikon D500 that I have today, I no doubt would have taken five bracketed shots).  Given the aforementioned extra time for the long exposure noise reduction, it took several minutes and I waited patiently.  The camera was set to show previews on the LCD screen so I would get a periodic flash showing me what I got.  After all three shots were taken, I’d check each one on the viewfinder including zooming in to check focus.  Then off to the next location. 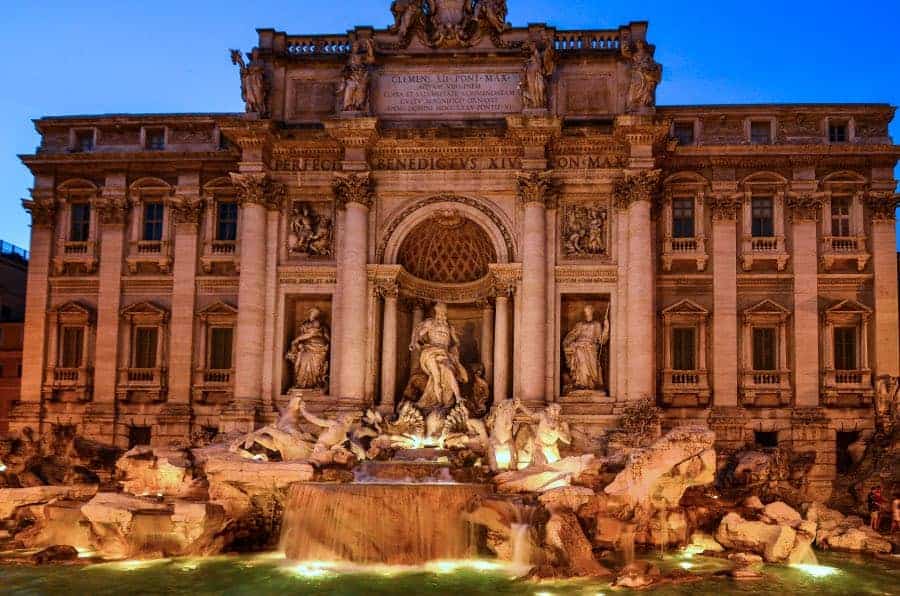 In some cases, we moved around a lot.  At the famed Colosseum, for example, I took pictures from several locations.  In one particular example, our guide took us to an overlook that I wouldn’t have imagined and it could only be reached by walking.

It is important to be flexible.  I had originally contracted the tour guide for three hours.  It wasn’t enough, and some of our spots were further away.  She had others (friends, I think) that she called that had a car then joined us after three hours to take us to a few more sites.  I paid more for the car, and also for the additional hours, but it let me get what I really wanted to get.  I might add that I also did a lot of expectation-setting up front with my traveling companion.  She and I had been together for several years so she knew me and my passion for photography, and she was also a patient lady.  She was a very good sport about it, but I’m sure it was more tedious for her than she let on.

In the end, I was very happy with the pictures and they are among the best of the 2200+ pictures I took in Italy.  But I would be remiss to not mention an important point about visiting such a spectacular photo destination.  You also do need to enjoy the visit and sights, not just the photography.  And you do need to make it pleasant for those that are traveling with you.  While my Rome photographic tour at night was the picture-taking highlight of the trip, and especially Rome, it wasn’t the only part of my trip in Rome.  The next day we took a private tour with an experienced guide who drove us to many of those same places, gave us the historical perspective, and also provided “skip the line” tickets to go inside of all of the sites.  It was a wonderful day, and on that day, I did take pictures, but it took a back seat to being in the moment and enjoying the day.  I was able to enjoy doing that because I had gotten my money shots the night before.

7 thoughts on “How to Photograph Rome in 5 hours”