I am the very definition of a hobbyist photographer.  I work a full time job, doing photography mainly on the weekends and when I travel and do not do paid shoots, although I have sold some images through stock websites.  Because of that, I try not to spend too much money on my camera gear.  A year or so ago, my back-up camera system was stolen out of my car and I couldn't justify buying a new back-up system since I had never once needed my previous system other than keeping it in my car in case I ran across something cool.

With how far the cameras have come in the iPhone, I decided to start using that as my back-up camera for those times when I just didn't have my main system with me.  Even with the iPhone SE, the images were good enough for me to make a decent image that satisfied my goals.  One of the great things using the iPhone as a back up is that it makes a pretty dang good macro lens replacement if you don't have one.  But, there are a lot of things that annoyed me shooting with the iPhone.  Most importantly, I had no control over camera settings and never liked using the touch screen.  That is why I was intrigued when I saw Miggo launch a kickstarter last year for the Pictar.  The Pictar is basically a shell that you slide half your camera into to gain control over your camera settings and the ergonomics and functions of a normal camera. 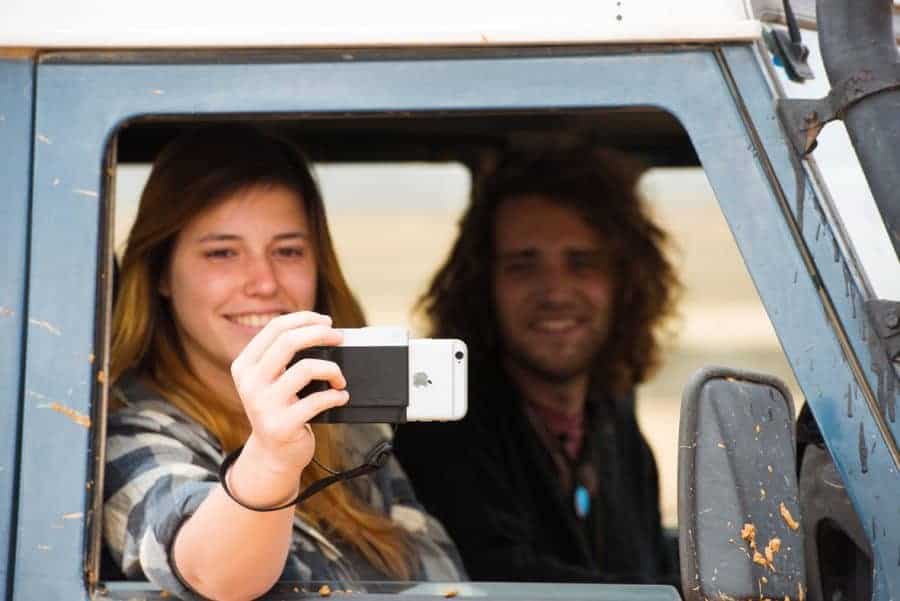 What Intrigued me about Pictar

The first thing that made me really want the Pictar is gaining control over the camera settings on my iPhone with separate dials and buttons rather than using a menu system.  I shoot Fuji and I love their dial systems where I almost never have to go into a menu.  It makes so much more sense to me to be able to quickly control camera 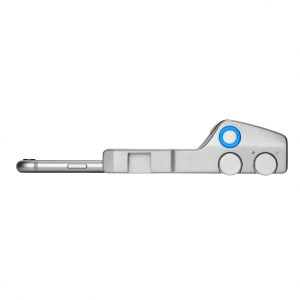 settings with the turn of a knob rather than using menus.  The other basic thing that excited me about Pictar was that I hoped it would be more comfortable to use because I hate shooting with my iPhone as it is. I hate having to use two hands to hold the phone, focus, set exposure and trigger the shutter and all that.  Having my phone be used like an old point and shoot where I could just hold it up with one hand and push the shutter was appealing to me.

Another thing I really looked forward to was the zoom ring.  I hate trying to pinch the screen in and out.  Not only is it clumsy, it is impossible to do with one hand while holding the iPhone.  I also liked the idea of a more traditional shutter button that you can press down to focus and expose.

A big concern for me with hooking anything up to my iPhone is the drain on the battery.  My experience with iPhones is the batteries are amazing for about a month, then go absolute garbage.  It annoys me like crazy that I have to charge my phone multiple times throughout the day.  I could go on, but I think you get the point without more of a rant.  For this reason, I was interested to see Pictar develop technology other than bluetooth to communicate with the iPhone.  I was hopeful in the claims that this would reduce the drain on the battery.

Finally, the ability to slow down the shutter to me is a game changer in being able to create images that are more than just a snapshot.  Besides being able to manually control the aperture, the Pictar includes a tripod socket so I was excited to use a normal tripod with my iPhone without any hassle or special adapters.

First, I really like the size of the Pictar.  It is small enough I can throw it in any camera bag without it getting in the way.  I can also leave it in my car or even in my pocket without a bother.  It is also really light so don't worry about it taking it on hikes.  That makes it perfect for those experiences when you can't or don't want to haul around your big camera.

Second,  I love the ergonomics of Pictar.  It has the feel of an old point and shoot in your hand, but with the ease and enjoy-ability (actually a word, I didn't believe it when I wrote it) of an old-school SLR, having the dials and buttons on the body .  It is really easy and comfortable to use one-handed, which I have found is really nice when traveling with kids as I can take photos while my hands are full with baggage.  It has also been great for street photography where I don't want to draw a lot of attention to myself.

I don't shoot a lot of selfies so I did not really care about the button that changes the camera to selfie mode, but I have actually found it quite useful.  When travelling, I like taking pictures with my wife or kids and it is really easy to do with the Pictar.  I have found myself taking a lot more selfies with the Pictar than I ever did before.

The zoom is another tool I felt was useless on my iPhone, but have started using more since I have the zoom ring on the Pictar.  Now, I know the zoom is all digital and doesn't really do much more than cropping, but it is nice to be able to easily zoom in and get the crop you want in camera, especially if it is just an image you are going to share on social media or send it to someone (or let it sit on your hard drive and not do anything with it, like most of the images taken on my back up camera).  The ability to just roll a wheel to zoom as opposed to pinching fingers of a second hand across a screen to try and get to the right zoom is such an improvement. 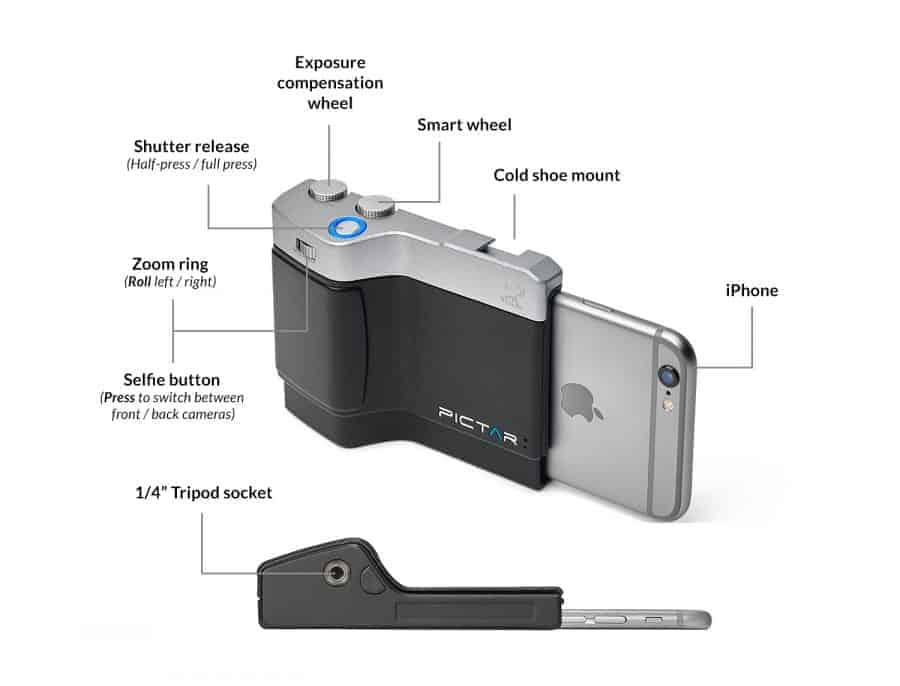 The smart wheel is really the essence of Pictar.  Spinning this wheel selects what mode you are putting your camera in.  You can go automatic, choose one of the preset semi-automatic modes, shutter, ISO or manual.  In manual you can't control the aperture because it is fixed, but you can do both the shutter and ISO.  I primarily use it in shutter mode or manual.  In this mode, the shutter settings pop up on the right side of your screen and you just swipe up or down until you get the setting you want.

I have enjoyed the shutter button on Pictar.  It is so much nicer for focusing and it is easy to push when holding the camera with one hand.  If I am honest, 90 percent of what I hated about using my iPhone as a camera was just the unnaturalness of it all.  The grip of the Pictar and an actual shutter button changes all that and makes me feel like I am using an actual camera.  Even if it did no more than that, I would enjoy using the Pictar because I like to live behind the times and feel like technology hasn't changed so much that I am using my phone as a camera (I also like reading real books and listening to CDs).

I never used the shoe mount for a flash or other accessories so I can't give a report on those, but I do use the tripod attachment whenever I want to shoot a long exposure.  That is one of the coolest parts of Pictar as I love shooting long exposure, and although I haven't been forced to by not having my main camera or having it malfunction, it is fun to be able to push the iPhone into long exposures and create something 99% of people could never do with an iPhone.  Even with the apps that let you control your shutter speed, you would have to have a special tripod set up for your phone, but with the regular tripod socket on the Pictar, you can use the same set up you use for your normal camera without any issues.

It hasn't all been roses with my use of Pictar.  As I ranted above, I hate having to charge my iPhone all the time.  While I was hopeful the technology used by Pictar wouldn't be a drain on the battery, it is a huge drain.  Sometimes, I felt like it wasn't too bad, but other times, I could literally watch my battery percentage go 39-38-37-36 as I was using the camera.  This was a huge hindrance in using the Pictar as a back up camera because it doesn't do you any good if you don't have plenty of phone battery to use.  Because of this, I started packing an external battery pack with the Pictar when I take it.

My other issue is the inability to push the iPhone images much.  As you can see in the images above, there is a quite a bit of noise.  In fairness, I am shooting with a fairly old, cheaper iPhone model than most of you, so I would expect much better results shooting with an iPhone 7 or even 6.  The below images show what I was able to do in Lightroom as the top image is unedited and the bottom image has some pretty aggressive edits. 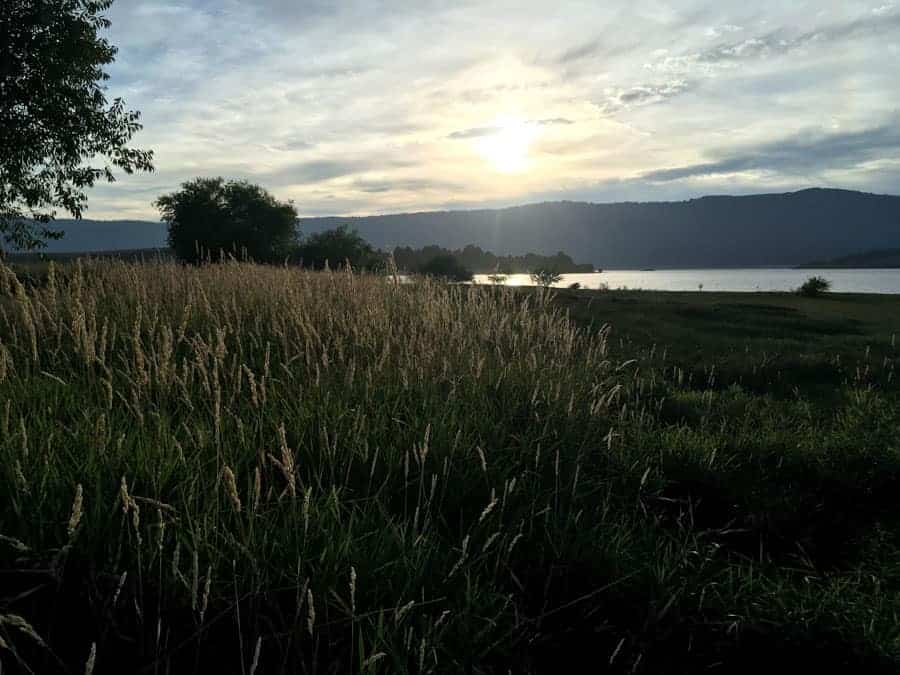 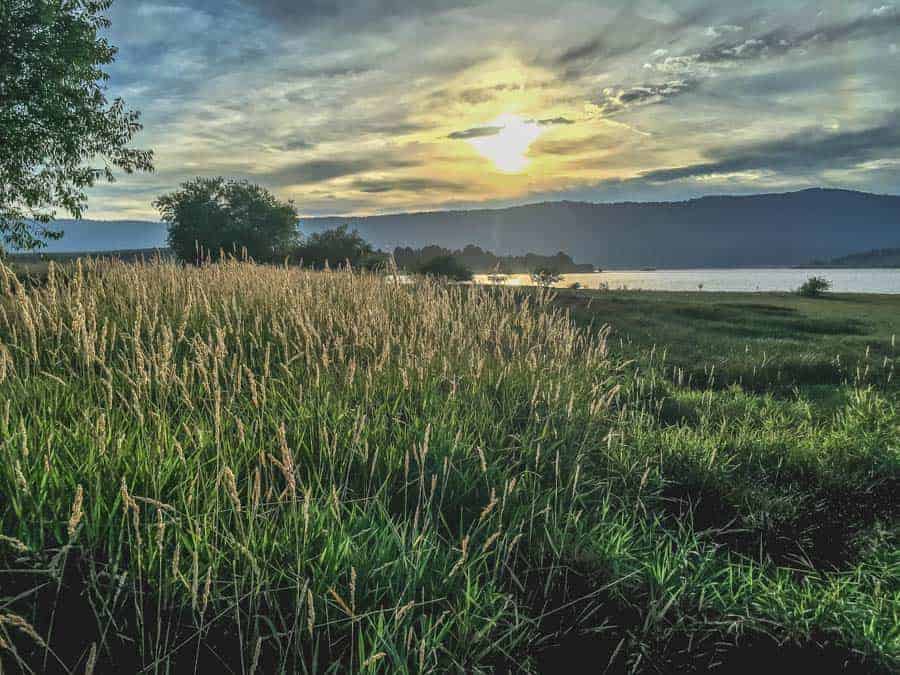 You can pick up the Pictar for $99 on Amazon.