As I have traveled the world taking photos with readers of Improve Photography over the last 8 years, I have many times felt disillusioned with massive photographer crowds at some of the locations.  The allure of a photo of a monkey bathing in a natural hot spring is ruined when you learn that there are hundreds of others standing right outside the frame, and a large infrastructure to handle the crowds.  After all, photography is about adventure and discovery to me, and these elements are entirely removed from the equation when the area is full of photographers.

Last year while leading a workshop, I found that a spot I'd visited on an earlier trip without even one other person there, now had a giant 5-story observation platform which was built to handle the crowd of photographers that began flocking to the spot.

The number of photographers in the world is unlikely to lessen.  The hobby is growing rapidly as more and more people come to enjoy photos by the easy access of cell phone cameras.  You could always go to popular photography locations and simply ask everyone politely to leave, but that's unlikely to succeed.

Last year while doing a meetup with 60+ Improve Photography readers in Zion National Park, I laughed hysterically as I pulled up to a well-known bridge and found approximately 200 photographers lined up LITERALLY shoulder-to-shoulder to capture a photo of the Watchman over the river.  I struck up a conversation with a very skilled landscape photographer who I met there and asked him what locations he'd visited in the area.  He named the usual spots which are also extremely overcrowded.  I asked him about some of the spots where I'd made my favorite shots that weekend and he'd never heard of them.

The point?  We photographers need to learn to explore.  Yet, I too have spent many Saturdays driving around on old dusty roads–not even taking the camera out of the bag–because I couldn't find anything interesting to shoot.  I believe the solution is that photographers need some help in finding the UNLIMITED beautiful locations around the world so they don't just go to the few tried and true locations.

That's why I released the Really Good Photo Spots app last week.  The app has THOUSANDS AND THOUSANDS of locations around the world.  Some are well-known locations, but MANY THOUSANDS are relatively unknown to photographers.  It's a free app, so check it out.  Until then, you can enjoy reading through this list of some of the most crowded photography locations on earth.

Before you ask “Won't the app just cause more problems in photo locations that were previously more secret?”  I believe the answer is no.  There will always be lots of photographers, and the world is a big place.  The problem isn't that people are taking pictures, but that most people don't know many places to go, so they bunch up.  This leads to MASSIVE congestion, safety issues, and environmental impact.  If the people would explore more and find other spots, the number of photographers wouldn't be an issue.  The app has THOUSANDS AND THOUSANDS of spots.

If in the example above more of the photographers had known the many dozens of other great spots to shoot in Zion National Park, there would not have been any safety issue.

The first time I visited the rice terraces in China, our group were the only ones on the mountain overlooking the incredible scene.  There were other people in the area, but I didn't see any photographers.

I returned back with a group and found a gigantic 5-story observation deck had been built in the spot to handle the hoards of photographers.  We had to get to the spot two hours early to stake out a claim on a tripod spot. 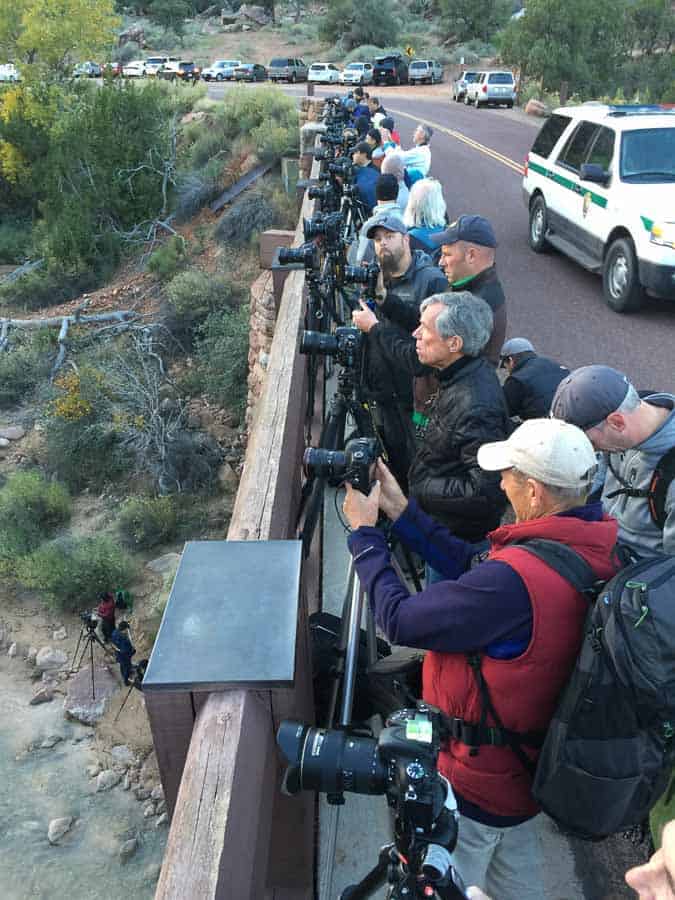 As mentioned above, this spot is absolutely packed–especially during the fall when “the tree” is in fall color.  It's a dangerous location only feet from where cars are passing by, and there are MANY better photography locations near Zion National Park.

If you visit Yosemite at just the right night of the year, and if it's a clear night, there is a rainbow that forms beside the water.  Also, there are times when it can look like the water is on fire from the warm light of the moon.  It's a neat occurrence, but it's absolutely STACKED with photographers now that this has become popular.

Trust me, there are lots of other cool locations to shoot in Yosemite, and we have tons of them in the Really Good Photo Spots app.

The Dark Hedges is a street in Northern Ireland where there are stunningly beautiful old trees which lean out over the lonely road.  The area is somewhat remote, but since the popularity of Game of Thrones took hold, the area has become absolutely flooded on tourists.  Some might even say the area is on fire with tourists (sorry, personal joke).

Maroon Bells is a stunningly beautiful location in Colorado during peak fall color.  The bowl shape of the mountain to the sides, the triangle-shaped mountain in the middle, and the glass water reflect a tremendous landscape.  Consequently, the area is overrun with photographers.  A friend told me that on any particular morning during fall color, you can expect to see over 300 photographers lined up shoulder-to-shoulder and that you have to arrive 3 hours before sunrise to even find a parking spot.

It's a gorgeous location, but did you know that

I absolutely LOVE Italy–Cinque Terra, Tuscany, the Dolomites–it's a photographer's dream.  However, I found the iconic city of Venice extremely overcrowded with people, full of vandalism from graffiti, and really smelly from the dirty water.

The city of Venice is absolutely overrun with tourists.  It's hard to even walk down the streets from the crowding in the narrow alleyways through the maze of the city.

If I were to go back to Italy (which I won't because I got a speeding ticket and forgot to pay it), I'd skip Venice and spend twice as much time in Tuscany, which is not overcrowded at all in the spring and early summer before the olive and grape harvest.

For Christmas two years ago, I gave my son a golden ticket.  It was a ticket to join me on a photography trip anywhere he wanted to go.  He liked ninjas, so he chose Japan.  The trip was magical bonding time for us, and I of course wanted to photograph the snow monkeys.

After the long hike into the area, I was sad to see that we were not at all alone.  There were over 100 other photographers in the region.  I was glad to be able to be there anyway, but next time I'm going to do some more research to find more unique places to shoot.

Antelope Canyon is a skinny slot canyon near Page, Arizona where you can make awesome photos of the unique red folds of rock.  The area is so absolutely packed with photographers that you can only go there on a tour, and even on a photography tour, you'll be shoulder to shoulder with other photographers and never have more than 15 seconds to get a shot without someone stepping into the frame.

Ah, the Netherlands.  Beautiful flowers, windmills, bicycles, and a cultured city.  Amsterdam, however, is completely full of photographers and tourists during the bloom.

15 thoughts on “10 Most Overcrowded Photography Locations on Earth”