I am a Los Angeles based photographer who works on mostly lifestyle shoots around the city. I discovered the world of Crossfit about four years ago after getting completely bored with my normal gym routine and have been doing Crossfit ever since.

Over the past couple of years I started shooting local Crossfit competitions for fun and then realized that there was a huge need for people to be able to take great photos at these events. I’ve learned a lot about the challenging aspects of photographing in these situations, and I think these tips can be used by anyone attempting to take great action photos in any circumstances with low light.

Understanding the (lack of) light and setting your camera correctly

Crossfit gyms (most commonly referred to as “boxes”) and gyms in general are notoriously poorly lit. Anybody who has tried to take crisp photos of their kids’ basketball games or any other indoor sporting event knows how tough it can be. There are two issues at play working against us in these situations: 1) gyms are lit much worse than our eyes would have us believe, and 2) the subjects being photographed inside these poorly lit establishments are most likely in motion.
As photographers, one way we try to compensate for poor lighting is by decreasing our shutter speed in order to let in more light. Unfortunately, for indoor action shots, decreasing our shutter speed means the subjects of our photos will become more blurry. The second way we try and combat low lighting is by increasing our aperture size. But this has the side-effect of reducing the size of the focal plane of the shot, which then increases our chances of winding up with our subjects being out of focus…especially if they’re moving around! 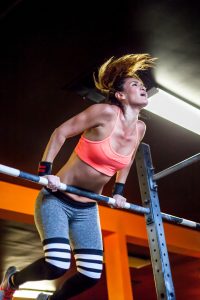 So what’s the solution? The solution is to increase your camera’s ISO until you are able to use a fast enough shutter speed to freeze the action while using an aperture size that allows you to keep your primary subject in focus all while not having the image quality become compromised by the noise that having a high ISO might introduce! Sounds complicated, but I’ll break down my approach into three steps to simplify things. 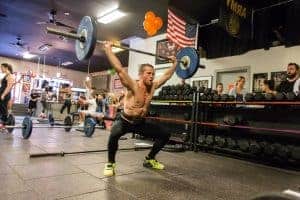 Most important for indoor sports shots is being able to sufficiently freeze the action. Never put your camera in full Auto mode indoors as your camera will most likely attempt to immediately drop the shutter speed to compensate for the low light. I find that for Crossfit and other fitness events, 1/320th or even 1/250th of a second is sufficiently fast to freeze the action of most movements. These shutter speeds would probably not be fast enough to freeze a sprinter or a hummingbird, but 1/320th works while still letting in enough light. If there is a corner of the gym where the lighting is especially miserable, I may roll down the shutter speed to 1/250th as long as I catch the athlete in a portion of their movement that is not too fast (i.e. at the peak of their jump). 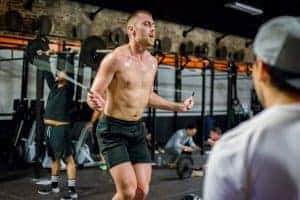 In Manuel mode, after having my shutter speed set to 1/320th of a second, I will dial in the aperture of my lens to one specific value. Most of my favorite Crossfit shots that I’ve taken have come from my Canon EF 50mm 1.8 STM II lens (the “nifty fifty”). This cheap, sharp, super fast focusing lens with a wide aperture is perfect for these environments. Although letting in the most light, leaving the lens wide open at 1.8 would mean I would have a very slim chance of getting someone perfectly in focus while they were jumping around, so I find an aperture setting of f2.5 or f2.8 brings in enough light while still allowing for a large enough focal plane to rarely miss focus (and that aperture size has the added bonus of nice background blur which increasing the “pro” look of the shot). I love my Canon EF 24-105 f4.0 L zoom lens, but the f stop of 4.0 is just too dark for indoor shots-and yours probably are too.

Once I have my shutter speed and aperture manually dialed in, I will set the ISO to automatic, but only after having limited it’s maximum value in the menu settings of the camera to an amount that I deem acceptable (since the highest two ISO settings of my camera introduce too much noise). In a studio setting, I can dial in my ISO to one value after doing some test shots because the lighting doesn’t change from shot to shot. However, in a gym, depending on where I am shooting, the lighting can drastically change from shot to shot. One shot I can be shooting an athlete in front of a bright window, while the next I could be pointing at someone in a dark corner. This means Auto-ISO is key. I have been enjoying shooting with my Canon 6D recently. It performs very well in low-light, and I find that ISO 25,600 can still deliver acceptable images with noise that I can sufficiently pull down in Lightroom after the fact. However, I don’t like when my camera thinks the high-end of my ISO is the best value for multiple shots in a row, so if I see my camera has been using super high ISO levels for a few consecutive shots, I will quickly set my ISO to a given number-like ISO 10,000, and adjust the aperture and/or shutter speed accordingly to let in some more light from there, and then after a few shots throw it back to auto ISO. 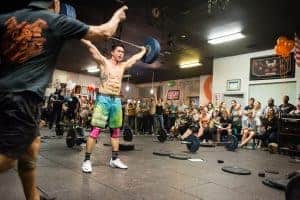 There is one caveat here…I believe shots using high ISO’s on modern cameras have the ability to look great, but that depends on what you are going to use the photos for. When I shoot fitness events, 99% of the time, the final destination for the photos is online (whether facebook, or emailed directly to different participants etc). If I were commissioned to do a fitness shoot that would be ultimately used for print or product advertisement, I would most likely not use such high ISO’s…but in those situations, presumably, I would have my own lighting rig and the shoot would be more controlled allowing me to shoot at a much lower ISO.

Even if you master the settings above, have a sick camera and a set of fast pro lenses, you can still take bad shots if you aren’t comfortable with putting yourself in the proper positions to capture cool moments. On many occasions I have seen people standing on the sidelines with crazy expensive camera gear take a couple pictures from a distance and call it a day. In order to capture the action, you need to get close, and you need to take lot of shots. This means that you might have to communicate with the actual human beings you are photographing, and you will have to shoot a lot. 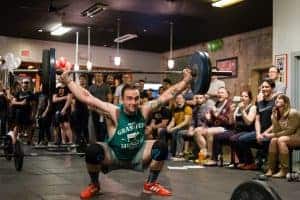 Unlike most sporting events, local Crossfit competitions generally allow spectators to get pretty close to the action. There is technically no “court” or border that would preclude someone from taking up close and personal shots. So in general, as long as you ask permission from a manager, you should have no excuse for not getting close enough to get good shots. That being said, if someone is in the heat of an intense workout trying to gain every second they can on their competition, the last thing they want is a lens in their face throwing them off their game. It can be awkward to get close enough to take a great picture of a complete stranger. What I’ve learned to do is to try and talk to the athletes before an event. A good ice-breaker I’ve used is saying something disarming like “would it mess you up if I was directly in front of your face taking pictures of you during your entire workout”? Something like this will usually elicit a chuckle from them and hopefully they will let you know they’re cool with you taking some pictures. Always stay out of their site-line as many athletes use a point directly across from them to focus on. Aside from that, most people want awesome pictures of themselves and they’ll be cool with your presence. Just be aware of your surroundings and be respectful if you are making someone uncomfortable.

Another trick I use is to position myself in front of someone I want to photograph and then focus my lens on something or someone to the side or behind them. For some reason, in that moment that athlete becomes aware that I am close to them but not necessarily focused on them, and they loosen up. Then, when I move my lens towards them to take my shot, they tend to be more natural about being the subject. 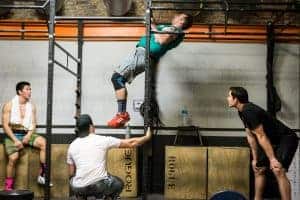 As I mentioned before, I love using my Canon EF 50mm 1.8 STM. The faster the lens the better. In addition to the 50mm, I also shoot with my Canon EF 28mm 1.8. This super wide-angle lens is also very fast and lets in a lot of light. Though not as sharp as the 50mm, I like to pair it off with the 50mm to get some various looks. The cool thing about the 28mm is that you can capture what the entire body is doing. It generally has a more stylized look than the 50mm, but I constantly switch between the two during a given shoot. The 50mm is perfect for capturing super crisp faces and expressions, and I throw on the 28 to catch “epic” moments (i.e to squeeze in an entire gym, cheering on an athlete at the last second). 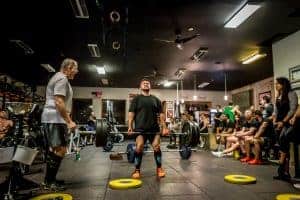 Other Action
A huge part of what makes most sporting events fun is the environment surrounding the event. My favorite memories of going to Yankees games as a kid in New York are of the Cracker-jack guy throwing cracker-jacks over my head or of the human wave going around the stadium. Don’t forget to take pictures of spectators, coaches, set-ups, and in-between moments.

Lastly-with Crossfit competitions, there will always be the more “advanced” athletes. They can be more dazzling to photograph, but a local Crossfit competition is about everyone participating, no matter their level. Don’t focus only on the elite athletes…everyone who shows up to compete will appreciate you taking the time to snap some cool shots of them. 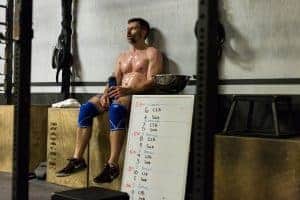 6 thoughts on “How to Photograph Crossfit Competitions”