Although many of us can rattle off in-depth specifications about our camera bodies or talk about complex post-processing techniques for hours at a time, surprisingly few photographers know how the guts of their camera actually operate.  I realized recently that I was one of those people.

Even though I felt like a had a strong working knowledge of my camera and what its optimum settings were for a given shooting situation, I knew very little about the simple mechanical processes that happen behind the scenes every time I take a photo.  So, I decided to take a look inside my DSLR and start learning the basic details about what makes my camera function and why different settings lead to different photos.  First up on the list for How Do The Guts of Your Camera Work: 101…the shutter.

What Is A Shutter?

The shutter is the mechanical device that allows light to pass through a camera and reach the object that registers the scene at which the camera is pointed.  For film cameras, this object is the film itself.  For digital cameras, on the other hand, this object is the electronic sensor we hear mentioned so often when discussing the specs of a new camera.  When the shutter release is triggered, the shutter, depending on the type, opens or moves so that the light it was blocking hits the film or sensor for a certain amount of time.  The shutter speed chosen for your exposure determines for how long the shutter will allow light to hit the film or sensor, which in turn determines things like the brightness of your exposure and how motion of subjects in your scene are portrayed in your final image.

What Is A Focal-Plane Shutter?

There are different types of camera shutters, but the one that is most commonly used in today’s digital single-lens reflex (DSLR) and mirrorless cameras is the focal-plane shutter.  There are different types of focal-plane shutters, each of which share the fact that they are located directly in front of the camera’s sensor.  However, the characteristic they all have in common is that they sit within the camera body directly next to the sensors, as opposed to somewhere else, such as in the lens attached to your camera.

For a focal-plane shutter to work properly, it needs to be able to expose the camera sensor to light for amounts of time ranging from mere fractions of a second all the way up to minutes or hours.  This is typically accomplished by way of mechanical “curtains” which slide past the camera sensor, exposing either part or all of the sensor at once.

For an example of how this process works, think of curtains on either side of a window in your home.  If the left curtain is drawn all the way to the right, blocking sunlight from entering your home, all you need to do is draw that curtain to the left to begin letting the light in.  If you draw the left curtain all the way to left, the window will be unobstructed and sunlight will flood into your home.  However, if you move the left curtain and the right curtain at the same time, leaving a six-inch gap between them as they move, you would allow only a sliver of light to move across the room as the curtains move to the other side of the window.

Drawing one curtain at a time and letting the light flood in is how your typical modern day focal-plane creates a long exposure.  Allowing only a sliver of light at a time spill through the opening between the curtains represents how your camera creates a fast shutter speed.  For a visual example of this process, check out the high-speed video below.

While the slowest shutter speed possible with a focal-plane shutter is basically only limited by the battery life of your camera (and when it finally decides to give up on you and shut off…), the maximum fast shutter speed achievable is more complicated.  Given that the focal-plane shutter’s mechanical curtains need to move at high speeds, there is a physical hurdle that presents itself.  Simply put: how quickly can the two shutter curtains move so that the gap of light that hits the sensor is as small as possible and hits the sensor for the shortest amount of time?

As of this writing, the fastest shutter speed that I could find on a modern DSLR with a mechanical focal-plane shutter was 1/16,000th of a second.  Some of Fuji’s mirrorless cameras appear to hit 1/32,000th of a second with the help of firmware that uses an electronic shutter function.  However, most DSLR or mirrorless cameras these days top out at 1/4000th or 1/8,000th of a second.  Keep in mind that the curtains moving in front of your camera sensor are small and can break, so the faster they move, the more physical barriers such as durability come into play.

In flash photography, brief bursts of artificial light are used to brighten a scene.  If relying on artificial light, it is important to know the sync speed of the camera that you are using, which is basically a function of the speed at which your camera’s shutter curtains can move.

In these situations, the brief burst of artificial light from a strobe could be as short as 1/1000th of a second, meaning that you want to have your camera’s sensor fully exposed when the burst occurs.  If the sensor is not fully exposed to the light because one of the shutter curtains has yet to move out of the way, the result is black bands in your image which show where the curtain was blocking the light produced from the flash.  In short, the sync speed reflects the fastest shutter speed your camera can achieve while still having the sensor fully exposed.

As discussed above, during fast shutter speeds, focal-plane shutters do not expose the entire sensor all at once.  As a result, fast shutter speeds may lead to rolling shutter issues, which is a form of distortion caused by moving objects in your scene.  As an example, take the image below.  I took this shot from the back of a motorbike when I was travelling in Thailand.  As you can see, it isn’t my best work, but it does illustrate when rolling shutter can be an issue. 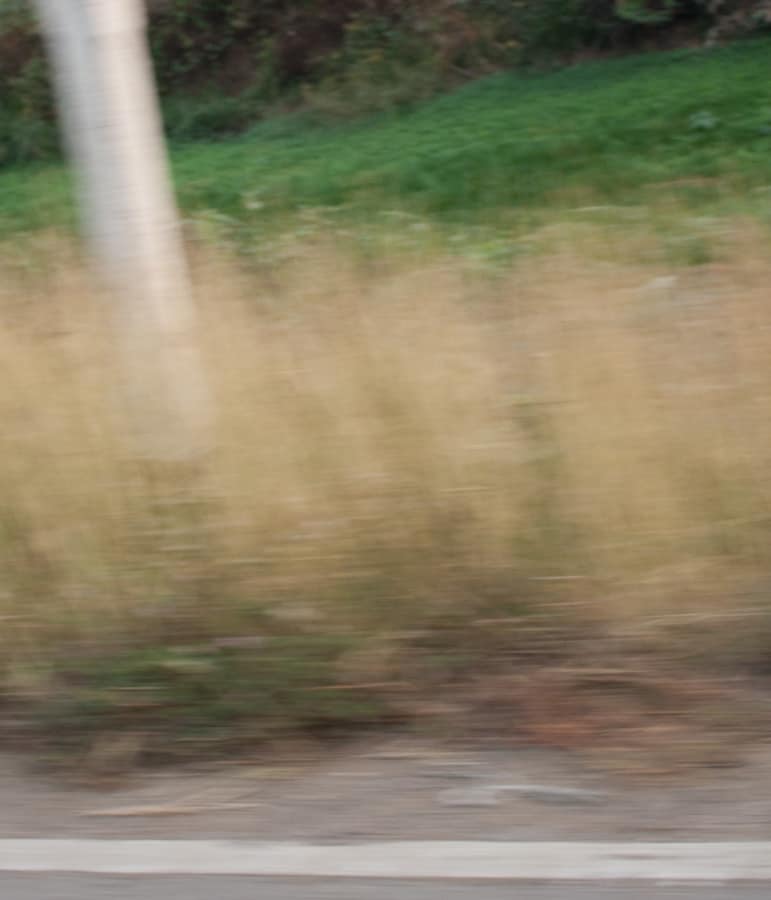 In the image above, the white line on the road at the bottom of the photo shows what level, horizontal ground was.  The white pole should be perpendicular to that white line.  However, since the curtains of my shutter moved from top to bottom, exposing the top of my camera’s sensor before the bottom, the speed at which I was moving past the pole caused it to appear to move within the image.  When the top of the sensor was exposed, the pole was almost all the way to the left side of the frame.  However, by the time the middle of the sensor was exposed, the pole was in a different part of my frame about 1/4 of the way into my image.  As a result, the pole appears to be slanted in the shot.

While it is important to know how to operate your camera, I have learned that knowing how the camera operates itself can help to provide another layer of understanding when it comes to different photo situations.  You may have found black bands on your image in the past when trying out flash photography, for example.  Hopefully knowing why those bands appeared (or, more appropriately, why the remainder of your image didn’t appear), you can know how to avoid a repeat event in the future.

1 thought on “Focal-Plane Shutter: What it is and how it affects your photos”