Technology is an ever growing, changing entity. In the last few years, we have seen a dramatic leap in what we photographers can do.   The Matterport 3D camera is one of those leaps. I recently was able to have a demo model shipped to me.  In the time I had it, I was able to do two location scans.   Along with the scans, I also did some research to hopefully give readers a better understanding of the complete Matterport system. 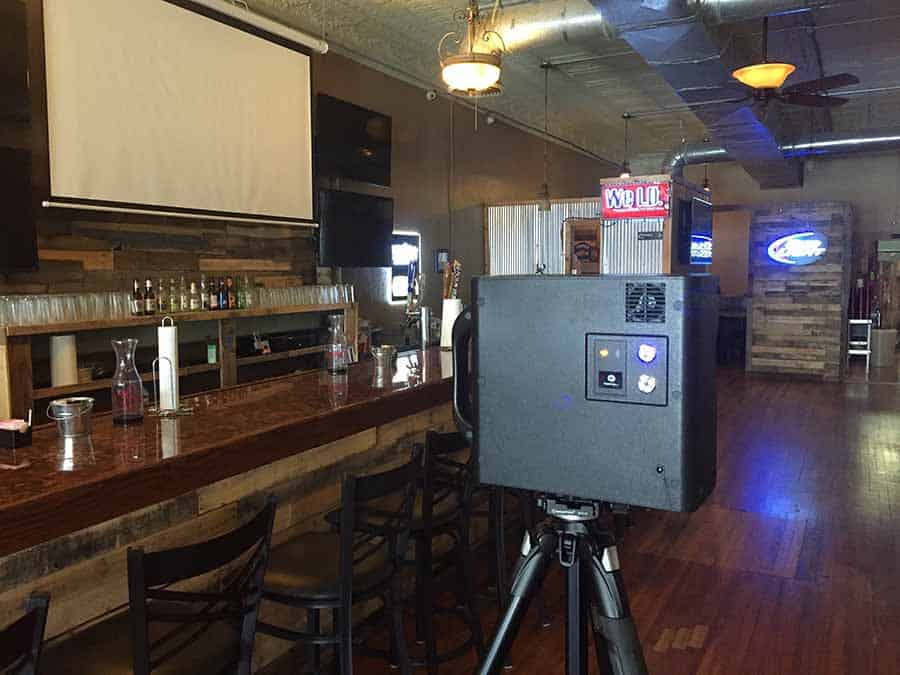 So what is the Matterport 3D Camera all about? Well it is simple. The camera is a very user friendly camera system that allows the user to scan a location. The camera utilizes a company provide IOS app that allows the user to control the camera to complete the scan. The user then uploads the scan to the cloud based service provided by Matterport and within several minutes or hours, depending on the size of the scan, the 3D virtual tour of the location is available for viewing.

So how user friendly is the system? I should have videoed this portion, but I am not a very good video host, so hopefully I can put it into words. When the system arrived, I already had the app loaded to my Ipad. I opened the box, pulled the camera out, put it on the tripod, pushed the power button, connected the camera's WiFi to my Ipad, opened the app and I was off and running with my first scan. I was viewing my demo scan within about 45 minutes of the camera showing up.

Yes, it was that simple. I will write more about my experiences later on.

So what are all of the gushy details that you need to know before writing the check, or at least exploring the system a little bit more.

The buy in might very well be out of your budget. The price tag on the camera itself is $4500. I have been seeing social media posts that is advertising a $600 discount, and there is a code on the site itself with this discount. At the time of writing this piece, the discount is good until September 5, 2016. Matterport does provide a financing option for “Qualifying US brokerages” but currently, that option is not available for anyone else.

The second thing you need to know is the fact that the files are proprietary in nature and there is no way for the photographer to have access where they can host the files themselves, or turn them over to a client. Matterport provides a cloud hosting service that ranges from $49 a month up to $149 a month. The clouds hosting does provide the appropriate code to allow someone to embed the virtual tour on a website, but it cannot be uploaded directly.

The Matterport representive that I was in contact with during the review process stated that if the cloud hosting is paid up, then there will always be access to the files. He further stated that even when an account is closed, the files are never deleted. He also stated that at this time, “the company will continue to provide the hosting options to our clients.”

Like I mentioned earlier, I used my Ipad to operate the camera system. This is mandatory. The Matterport website states: Apple iPad Air, iPad Air 2, iPad Pro, iPad Mini 2, iPad Mini 3, iPad 4, or iPad 4 Mini with the most recent version of iOS 9.x to run the 3D Capture App. *We recommend iPad models with at least 64 GB of storage.

There was no comment if the company had any plans on making the system compatible with any other operating systems.

A tripod is also required, so if you do not have one, then you will have to invest in one that has a rated capacity of 6.5 pounds with a quick release plate. Although I used the Matterport supplied Manfrotto unit, you can pick up a Vanguard Alta Pro 263 AT Tripod that can do the job. You can read my review of the tripod here.

Although not required, a carrying bag for the camera is highly recommended. Matterport supplied me with a Think Tank City Walker 20, which with the supplied insert was absolutely perfect for the camera and my Ipad Air.

So as you can see, buying into the system requires a substantial investment.

Like I mentioned earlier, operation of the system is pretty straight forward. I did two complete scans for purposes of this article. The first one I did was of a local sports bar. The location is small and I felt it was the best spot for me to do a live run. The second location was just over 2400 square feet.

Before I received the camera, Matterport representatives contacted me by phone and spent a few minutes going over the operation of the camera and offered me several tips to help me out.

The camera handled dynamic range fairly well.  It was midafternoon when I scanned the bar with no clouds.  The front of the bar is all windows.  Once I was able to view the completed scan, I saw that outside the bar was not completely blown highlights.

The scan took me all of about 20 minutes to complete. Like I said, it is a small bar. I did not do the kitchen or behind the bar. My main goal was the familiarize myself with real world operation and to give the owner something he could show off to prospective customers. Once I was on site, I mounted the camera onto the tripod, and then picked a spot back in the party room to start from. Once a scan was finished, I moved the camera 4-6 feet. Coming out of the party room, I only moved about 3 feet, scanned, then moved roughly another 4 feet and then as I made my way down the length of the bar, I would move about 5 feet until I was done. I did 8 complete scans. As you can see as you go through, you will see a blur of the owner as he walked through. The camera rotates 360 degrees on the tripod.  During the scan process, hide around the corner, or walk around the tripod.

The link takes you to the scan of the sports bar.

The second scan was more intensive as it was the 2400 square foot house out in the country. This scan was a little higher on the difficulty scale. I did approximately 30 scans, and it took just around an hour to do. Running into problems due to my inexperience, but I was able to learn a little more and overcame the issue.

The link takes you to the house scan that I did.

I have read that multiple floor scans are a little more intense.  Unfortunately, I was not able to nail one down.

The price tag may make the system prohibitive to a lot of photographers.  On the flip side though, if you have a strong real estate market and looking for something get ahead with your clients, this might be it.