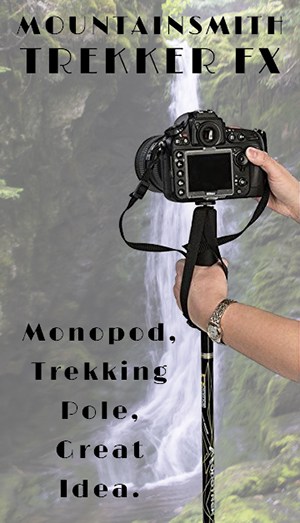 A combination monopod and trekking pole is a darned good idea and it is a tool that I've frequently wished for while hiking with my camera gear. The Mountainsmith Trekker Fx may not be the only one of it's kind, but it is the first one that I came across and it was a totally validating moment for me when I saw someone actually making a product that I had invented (if only in my own imagination). Carrying both a hiking pole and a monopod has always seemed redundant to me, to the point where I have actually considered installing a tripod screw into the head of my walking stick, but then…that would hurt my hand. Mountainsmith has thought of that, as well as a lot of other things that I never would have, so I guess that's why I leave product design up to others.

Why Do You Need A Monopod, Anyway?

I mean, you've followed all the advice and got yourself a sturdy tripod (if not, then Improve Photography's recommended gear guide is a good place to start), why on earth would you want a monopod? Several reasons, actually.

Why Do You Need A Trekking Pole?

Well, maybe you don't, but if you're a landscape or wildlife photographer, sooner or later you are going to have to do some walking and the most scenic places and impressive wildlife just don't tend to be where it's flat. As I get older (which I seem to be doing at quite an alarming rate), I just don't have the same confidence in my knees as I climb down rocky paths and don't even get me started on the tribulations of hauling my aging body UP a mountain. Over the past few years, a walking stick has progressed from being a luxury to a necessity that I wouldn't head out on a hike without. If you are younger and/or in better shape than me (as you almost certainly are), then a walking stick is still useful for the simple reason that anyone can trip and fall. Falling sucks. Falling with your expensive camera gear sucks even more. A sturdy walking stick or hiking pole offers greater stability, whatever your fitness level. 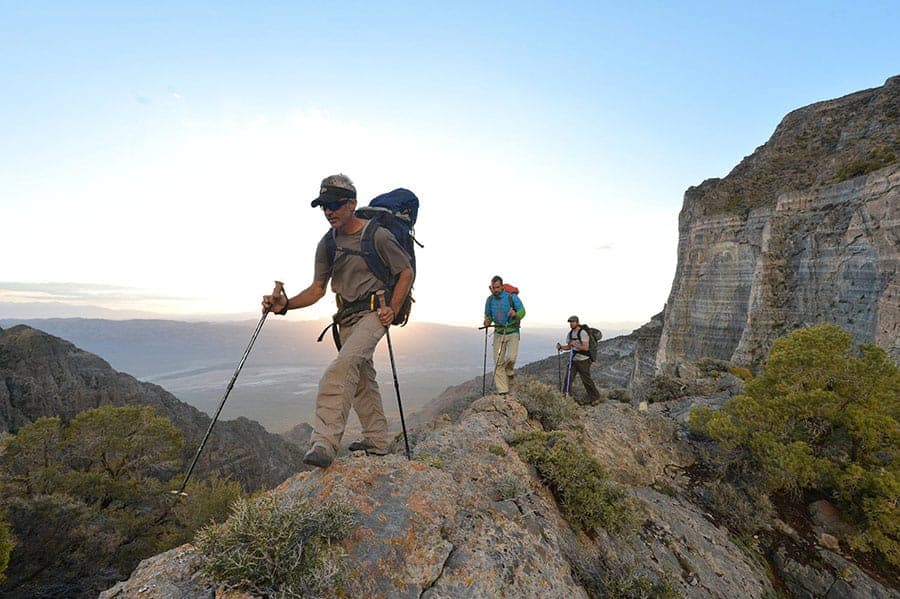 The Mountainsmith Trekker Fx Means One Less Thing To Carry.

Mountainsmith actually contacted me about reviewing some of their bags, but I have a gazillion camera bags already and very little desire to write an article about any of them. As soon as I saw the Trekker Fx, I wanted it and would have happily purchased it (only $29.95 USD on Amazon at the time of writing this!). For the record, I did not promise them a good review, or even that I would write a whole article about it but I ended up being pleasantly surprised with the quality of it, especially considering the low price point.

For starters, the pole is very light at 300g (10.5 oz), in fact, it is even lighter than my Sirui carbon fibre monopod! In fairness, the Sirui is much sturdier, meant to hold a ball head and can support a much heavier camera, but when packing light we have to make choices and gear that can do double duty gets the spot in my bag. It is important to note that they do not recommend using the pole to carry a camera weighing over 3 lbs. I have used it to hold a much heavier camera when supported on the ground but I wouldn't try carrying it over my shoulder that way. I probably wouldn't do that with my Sirui either, even though it's rated to 22 lbs because leverage will just make the camera seem heavier and those heavy telephoto lenses need to be supported anyway. It is rated for hikers weighing up to 160 lbs (72.5 kg).

The Trekker Fx has a wrist strap, which I always wished for on my previous walking stick, which was an actual stick, by the way. My boyfriend whittled hearts onto a nice stick while we were in Cape Breton years ago and that stick has been across Canada from the Western side of Vancouver Island to the Eastern side of Newfoundland. Because it didn't have a wrist strap, it has also been accidentally left behind a number of times when I have stopped to take photos. Sentimental value has caused me to walk many extra kilometres to go retrieve it, but now I suspect that it will mostly be retired to decorative duties.

Your hand rests upon a comfy foam handle, which twists off to reveal the camera mount screw. I do find the lack of a ball head to be a bit of an inconvenience, but obviously, the handle won't fit over my big ball head. I have noticed in the Amazon listing that there are some mini-ball heads that just have the screw mount on top and that should work, in theory, as long as you trust the ball head itself not to slip when you most need it to support your weight. I'm not sure that I do, so I think I'll just make do without one. The beauty of the monopod is that you can tilt the whole thing, making a ball head less of a necessity than it is on a tripod. It is also a lot easier to screw your camera on and off a monopod than it is with a tripod, so there is less need for the quick release plate.

There are two extendable, telescoping sections that release and tighten with a twist. The middle section has a handy height guide on it so that you can see the proper length to extend it to for your height. I thought that was pretty cool because I've never known what height it should be at. Perhaps that is a feature of all trekking poles, I wouldn't know because I'm so old school that I was using an actual stick prior to this. Unlike my wooden stick, it also has a spring loaded anti-shock system built in. The pole is 28 inches (71 cm) when compressed and extends to a full height of 54 inches (137 cm).

The Trekker Fx features a rubber boot tip that can be removed to reveal a carbide tip that may provide better traction on some surfaces and can also function like the spikes on your tripod legs and be jammed into softer soil or sand for some extra stability. There is a trekking basket (to keep your pole from sinking into soft soil) that can be removed altogether or replaced with a basket meant for snow.

Overall, I would definitely recommend this combination monopod and hiking pole for any nature photographer who likes to get out of their car and go hunting for the great shots.

*Some of the detail photos in the article are from the Mountainsmith Monotrek on Amazon.ca, which appears to be virtually identical – so much so that I didn't realize that it was not the same product until the article was well underway. I have kept them in because the Amazon listing for the Trekker Fx has videos rather than detail shots.