Last March I set out on a quest to upgrade my camera strap that led me to testing 18 different straps.  I was preparing to publish a massive review today featuring all those straps, but changed my mind when I started writing about the Agua from Miggo.  You see, the Agua is not really just a camera strap.  It is a storm-proof holster bag connected to a strap.  I was going to test Miggo's 2 Way Speed Strap because it looks like a really awesome strap that converts to a sling strap, which I really like, but the Agua was just too tempting for me to pass up so I went with that instead.  I tried to justify it by saying you could use the Agua the same as you would a normal strap (the bag even disconnects so you can attach just the strap to your camera), but at the end of the day, there was just so much different about the Agua, I wanted to separate it and give it its own article.

Miggo is an Israel-based company that has done great with kickstarter (I wrote more about them in an earlier article highlighting their Kickstarter launch of the Pictar).  Agua was one of their first products that really went big on Kickstarter.  I remember seeing it years ago when it was first launched and almost pulling the trigger, but at that time, I did not understand what Kickstarter was and was not quite ready to just hand money over.  Luckily, their Kickstarter campaign was a success and I was able to get one now!  The Agua is offered in three different sizes: the 45 for Pro DSLR cameras, the 35 for medium DSLR and the 25 for mirrorless or bridge (superzoom) cameras.  There is also an optional SideKick, which is a stormproof battery holder that attaches to the Agua. 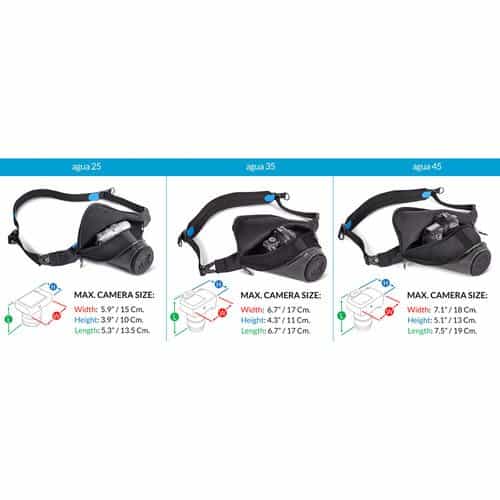 After looking at the measurements, I decided the 25 would work for my Fuji X-T1 with the 18-135 lens.  It fit the combination perfectly.  The bag is designed to only hold your camera so I wanted it as small as possible, but I was also able to throw a spare battery, memory card and small personal items in the bag with my camera.

The main draw of the Agua is that it is advertised as a storm-proof holster designed for comfort and quick access.

The Agua is rated as an IPX3-standard storm-proof camera carrier.   This means you should not have to worry about your camera getting damaged in a rain storm, but you also do not want to throw the bag in the pool (my first draft of this article left the l off pool, which would have still been true, but for a completely different reason).  I am currently testing some waterproof cases from Aquapac and became familiar with the waterproof rating systems in researching that gear.  The IPX system appears to be the most widely recognized international system.  It is separated into nine levels, from IPX-0 to IPX-8, designed to demonstrate the water resistance of any enclosure.  The breakdown is as follows:

PERFECT USES FOR THE AGUA

To me, the Agua is must have for two very specific occasions.   First, and most obvious, is going out in the rain (or possible rain).  I am sure every photographer out there has run into occasions where you get stuck in the rain and have to hide your camera up your shirt and search for safety or when you have your camera in a backpack with a rain cover and it becomes too inaccessible when you want to get a shot.

I have two quick examples that highlight these situations where the Agua would have been perfect.  Five years ago, my wife and I were in Washington D.C. and went out to the National Mall to photograph the monuments at night.  I was getting some beautiful stormy skies, but then the rain came, and it came hard.  I had nothing but my camera, amonopod (it was really stupid trying to do night photography without a tripod-it also led to a broken lens trying to balance the monopod) and a t-shirt.  We were at least a half mile from the nearest metro station and no buildings were open so I had to shove the camera under my shirt and hide out under a little eave until the rain subsided enough to continue.  Had I had the Agua, I could have kept my camera in the holster and not had to worry at all.  Since it was warm out, I could have enjoyed the weather and gotten some great shots in the rain without my camera getting too wet.

The second example was in Costa Rica when I stupidly left my Agua in the hotel when we went for a long hike in a rain forest.  I had my camera in my Think Tank bag when the rain started on our hike.  I used the rain cover on my bag as we hiked through the jungle, but because I was carrying a kid in my arms, my camera became completely inaccessible.  Even without the kid, I would not have wanted to set the bag down in the mud and pulled the cover back without the amount of rain coming down.  When the downpour grew a little weaker, I did put my kid down to get my camera out for an incredible landscape, but my camera got so wet as I fumbled to get it out, I took a subpar snapshot and threw it back in my bag before it got soaked even more. After that, I left my camera in my bag until the rain stopped because I was scared of ruining my camera (I was super thankful for the weather sealing on the X-T1 on that hike).  Had I remembered to take my Agua with me on the hike, I could have kept my camera accessible on my side and been able to quickly pull it out and get a decent image before the camera got too wet.

The second occasion where I thought the Agua would be perfect is at the beach.  I hate taking my camera to the beach ever since I ruined a lens with some stray sand seven years ago.  Anyone who has been to a beach knows that the sand will get into everything you take with you and it will take days, if not weeks, before you use anything without sand turning up.  I have tried many times to take a set up to the beach I could be comfortable enough, but usually I just take a few images and put it away before the sand can get to it (note I am talking about trips to play at the beach, not photography-focused trips).  I tested the Agua out at the beach in Costa Rica and it performed awesome.  I had no worries at all keeping my camera in the Agua and pulling it out to take a few shots whenever I wanted.  When I wasn't using my camera, I kept it in the Agua on a towel or beach chair  There was not a trace of sand inside the Agua or on my camera.

I found the Agua to be very comfortable.  It was very slim for a holster bag and fit nicely along the side of my body.  The strap is a pretty simple neoprene strap, but it was also soft and very comfortable to wear.  It was a great length to wear slung across my chest and did not bounce or slide around much.

The Agua has an outer layer of waterproof tarpaulin in matte black and a padded inner layer of Neoprene and Lycra.  Not only does this keep the water out, it adds a good cushion to protect your camera without too much bulk.  The zipper is tucked under a small flap and runs along the bottom to further shield it from water.  Unfortunately, this made it a little difficult to access and obtain a smooth pull on the zipper, but it was not to bad and I will make that trade to not have to worry about sand or water reaching my camera. 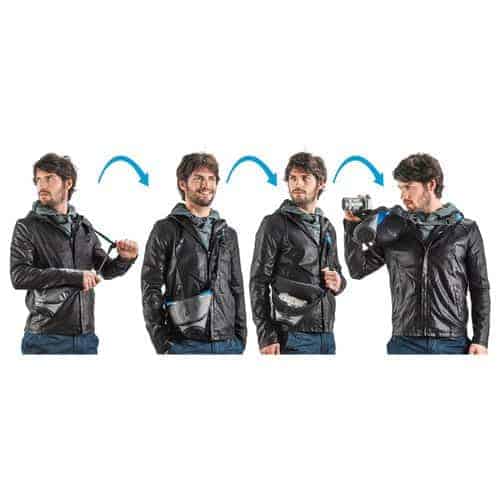 My camera fit really nicely into the bag.  I did not have to worry at all about it bouncing around and there are a few little gaps where you can shove a phone and/or wallet if you really try.  This was nice at our resort in Costa Rica because I was mostly in a swimsuit and did not have to worry about carrying my wallet or phone separately.  There is also a little pocket on the inside that fit a spare battery  perfectly.

Because the Aqua will be replacing your camera strap most of the time, there is quick-release buckle inside the holster that actually connects your camera to the strap.  To be honest, I never felt the need to even use the attachment, but it is nice to have if you are worried about potentially dropping your camera when you pull it out to shoot. 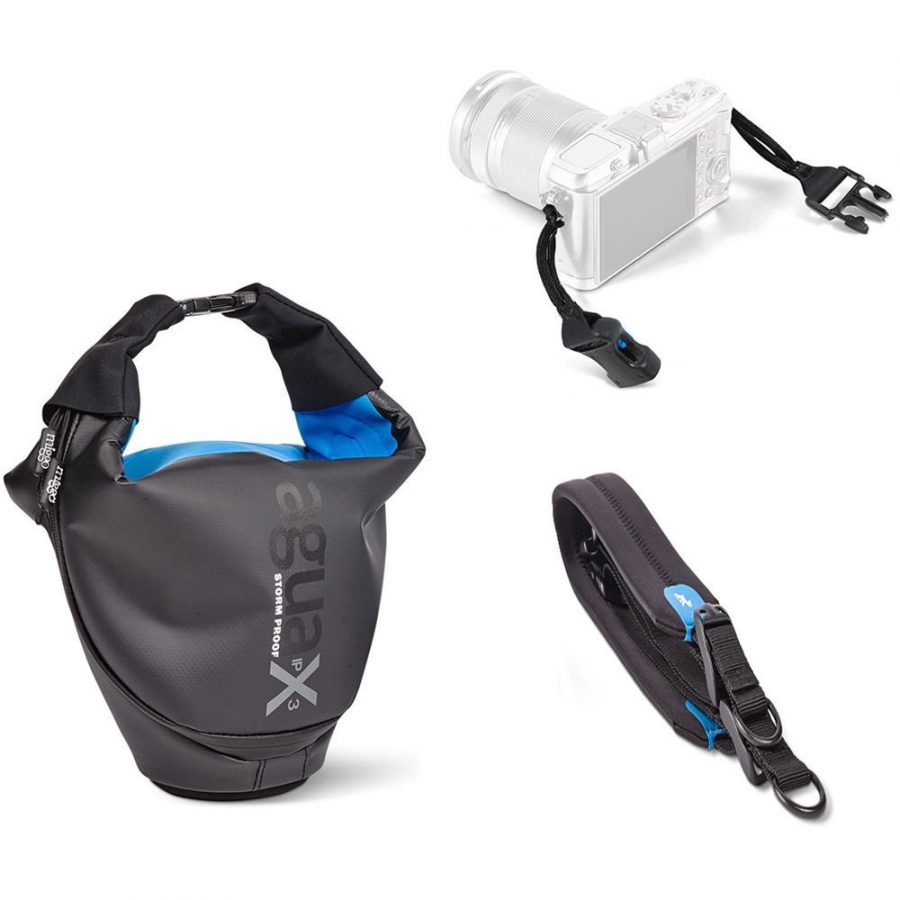 If you read my review of the Mindshift Multi-Mount Holster, you know I love a holster that can turn into a fanny pack!  The Agua also has this capability, which can be really nice for longer hikes or if you are climbing up a cliff and want the holster tight to your body out of the way.  Having climbed many cliffs with my camera on a normal strap, I know how difficult it can be to keep the camera from swinging into the rocks.  This usually leads to the difficult task of climbing mostly one handed.  So, even if you are too cool to sport a fanny pack, it can still be very useful in certain situations.

I love the Agua by Miggo.  I honestly do not know how often I will actually use it and it likely will not replace my Mindshift holster for everyday use, but there are enough occasions where the Agua is the perfect tool that I think it is a must have tool.  The next time you are stuck in the rain, at the beach or by the pool, you will wish you had an Agua as you worry about the safety of your camera or miss a bunch of shots because your camera is not easily accessible.

You can buy the from Miggo individually or packaged with some of their other products.  It is also available on Amazon.  As of the time of this article, the Agua is selling for $48-$68 depending on the size you want.