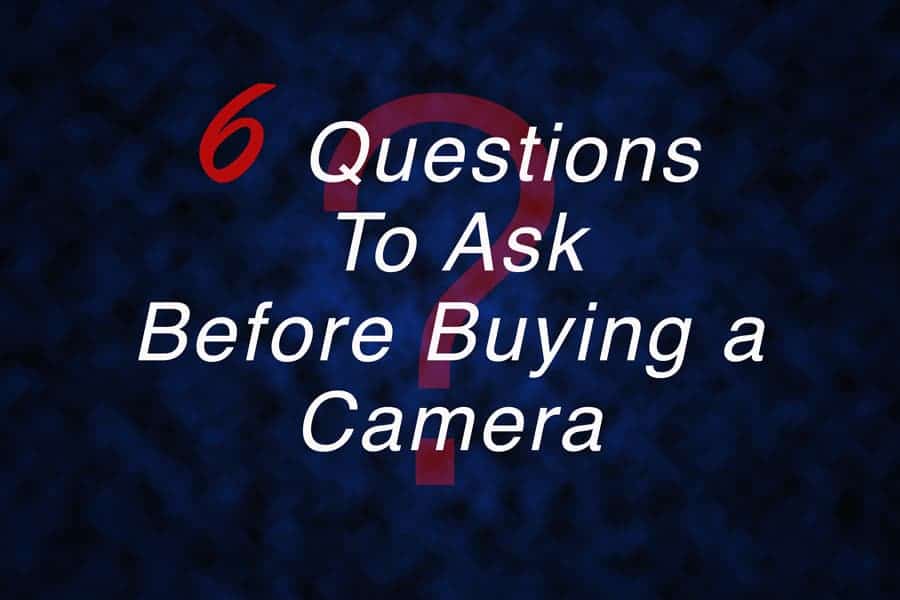 As “the photographer” among my family and friends, I inevitably get asked lots of questions about photography, especially when someone is considering buying a camera.

What is my budget?

This is the first question because it will eliminate more from consideration than anything else. Like just about every other item you can buy, there is a wide price range for cameras. For example, the Nikon D5, as of this publishing, retails for almost $6,500. At near the other end of the price spectrum, you can find a Nikon Coolpix for less than $100.

A quick word about how to allocate your budget if you are buying an interchangeable-lens camera such as a DSLR or mirrorless camera: I have heard several experts recommend that you spend 20% of your budget on the camera body and the remaining 80% on the lens.

While I’m not sure about whether those percentages are wise, the concept is pretty smart. Just as a new car depreciates as soon as it is off the lot, a new camera depreciates as soon as it is taken out of the box (not as dramatically, but you get the idea). Lenses, on the other hand, hold their value pretty well. So it makes sense to spend more of your money on something that will hold its value better.

Fortunately, there are some ways to make your money go a little farther, and I’ll cover those in a bit.

What do I want to photograph?

There are so many types of cameras that it helps to narrow the choices right off the bat. Deciding on what you want to photograph is a good way to do that.

This is because no camera is perfect for every situation. You need to figure out what is important for the type of photography you want to do. For example, if you want to photograph wildlife, you want a fast autofocus and perhaps even a crop sensor for some extra “reach.” For weddings or landscapes, you may decide dynamic range is what's important to you. If you are in to portraiture, you probably want to emphasize a sensor that captures good skin tones.

Once you figure out what features are important to you, you can then look for a camera with those features. To use wildlife photography again as an example, the Canon 7D Mark II meets the criteria of a crop sensor and fast autofocus.

How in control do I want to be?

My wife likes to take photographs, but she does not like to think about it. She’s not into shutter speed and aperture and ISO. She just wants to press a button and have the camera do all the work for her. If that describes you, then perhaps you want to look at a point-and-shoot.

On the other hand, I like to be in control. I appreciate the challenge of manipulating the exposure triangle to achieve the photograph I see in my mind. If you are like me, then you probably want a mirrorless camera or a DSLR. (While there are some point and shoots with manual controls, those controls tend to be harder to use than on a mirrorless or DSLR.)

How important is printing photographs to me?

In the days of film cameras, the only way to ever see a photograph was to have it printed. Of course, that has changed now, and printing photos is, for most people, a rare occurrence. If you just want photos to put on social media, then just about any camera—even a phone camera—will work for you. If, however, you are printing photographs, you need to be a little more choosy in what camera you are going to buy.

Many people believe that the more megapixels “a camera has,” the better its photographs will be. That, however, is only part of the equation. Another part, and much more important, in my opinion, is the sensor size. Under equal conditions, a camera with a larger sensor will take a better photograph than a camera with a smaller sensor.

For example, I have here two snapshots. One is a photo I took back in 2001 with a Canon Powershot G1. That camera had a 3.3 megapixel sensor. Next to it, I have part of a photo taken a few years ago with an iPhone 3GS, which has a 3 megapixel sensor (thats as close as I could get with my personal photos). Both are zoomed in at 100%. If you enlarge the comparison, I think you will see the G1 photo holds on to its quality longer than the iPhone photo. That is due, at least in part, to the larger sensor in the G1.

So, even though both of those photos came from cameras with sensors that contained almost the same number of megapixels, the camera with the larger sensor produced a better quality of photo. That’s even more impressive when you consider the G1 photo was taken indoors with no natural light and the iPhone photo was outdoors on a sunny day.

So what does this have to do with printing photographs? All cameras in the market today have adequate resolution to print—at least up to 8×10 if not larger. If printing is important to you, and you cannot decide between two cameras, pick the one with the larger sensor size. You’ll get better printed photos from it.

Do I need to buy a package?

It is not uncommon to see cameras sold as part of a package. In DSLR’s, you will commonly see a camera body and a lens sold together. With other cameras, you’ll see a camera sold with several accessories, such as a cleaning kit, perhaps some lens filters, screen protectors, etc. Most of the time, it is a good idea to avoid these packages.

In the case of DSLR’s and mirrorless cameras, the camera body is sold with what is known as a “kit” lens. These lenses are usually inexpensive to manufacture and either have lower quality components or are limited in some other way (such as smaller apertures). You can usually find a better quality lens for almost the same amount of money.

Those accessory kits you see with some cameras are, in a word, junk. If they contain anything useful, it may be a memory card, Even then, they usually include cards that are slow or an off-brand (stick with Lexar or Sandisk).

Here’s my suggestions of what to buy with a new camera:

You need not buy any money for software to organize your photos. Both PC’s and Apple computers come with applications for that purpose. Then, there’s always Google Photos if you want another free solution. Of course, I’m fond of Lightroom for organization and basic editing.

How can I save some money buying all this?

Who wants to spend more money than they have to? I have yet to meet someone who answers that question in the affirmative. Fortunately, there are a few ways you can save money:

It may seem scary buying a used camera or lens, but it’s actually a good idea. As I said earlier, cameras depreciate pretty quickly, so buying a used one can save a good amount of money. While lenses do not depreciate anywhere near as quickly as camera bodies, you can save money buy buying used lenses as well.

There are several reliable places to buy used equipment. Both B&H and Adorama sell used equipment. Most Amazon listings include options for used equipment as well. A lesser-known merchant that specializes in used photography equipment is KEH. All of these stores not only sell used cameras and lenses, but accessories such as tripods, speedlights, light meters.

Additionally, lens rental sites such as Borrowlenses and LensRentals will usually sell their inventory of camera bodies and lenses. They constantly check the returned rentals for issues, so you know what you get from them is going to be in good condition. The price of the item will vary depending on its age and how many times that particular item has been rented.

In addition to the used markets, each camera manufacturer has an outlet where they sell merchandise that has been returned and reconditioned. Usually, you don’t save as much through these outlet as you do buying used equipment, but the outlet merchandise usually comes with the entire manufacturer’s warranty.

I recently discovered a website that promises to save you some money on electronics, included photography equipment. Greentoe is sort of like Priceline for electronics. You “bid” by stating how much money you are willing to pay for an item, and if a merchant accepts, you get the item.

Greentoe also has Android and iOS apps so you can save money straight from your mobile device.

If you are looking to buy some software to go along with your new camera, you may be able to take advantage of some discount programs. Most of these are open to student and teachers of all levels, from grade school to college. Some are open to members of the armed forces and their dependents, government employees, or first responders.

In my research for this article, I discovered On1, Adobe, and Topaz Labs offer discount programs. The qualifications and benefits of these programs vary, so you will need to contact the company that makes the software in which you are interested.

Buying a camera should, in my opinion, be a process, not just a simple decision. Sure, I could have given you my recommendation—for example— for the best camera for taking photos of your kids, but that recommendation would be outdated in a few months. These questions will always apply, regardless of the latest model of camera or lens.

5 thoughts on “Six Questions to Ask Before Buying a Camera”