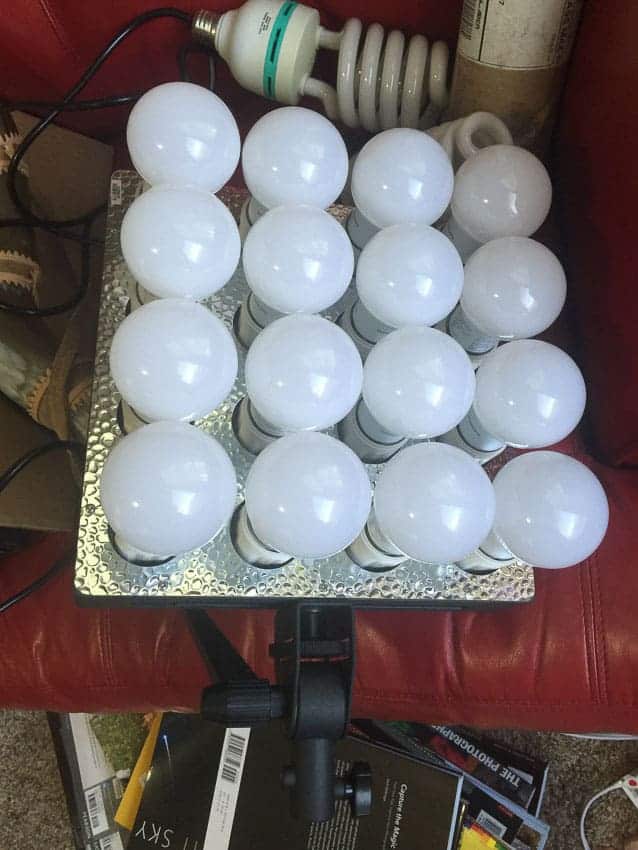 I accidentally purchased a Fotodiox C-1600 Cool Light on Amazon a few months ago, and I've gotta say that I love it.  I say that I “accidentally” ordered it, because I actually ordered the Fotodiox C-900, but the company made a shipping mistake and sent me the larger C-1600.  Happy accident as far as I'm concerned.

I've put this light through its paces for a couple months now, and I'm ready to give you the full review.  I've been using the light in my home video studio.  I wanted a very bright room so that I can avoid using high ISOs which cause grainy video.  So I actually have 52 lightbulbs in my small office to make it bright.  16 of which are coming from the Fotodiox C-1600.  It's literally brighter in my office than outside on an overcast day.

The standout feature of this fixture is that it holds a whopping SIXTEEN LIGHTBULBS!  It puts off a huge amount of light if you get the right light bulbs in it.  I was concerned that with so many light bulbs it would have problems with tripping the breaker, but since I put in LEDs, I haven't had any issues.  I'm not sure if some CFL bulbs may trip the breaker in your home.

The panel comes with a large fitted softbox with inner diffusion panel, which is nice when using this as a key light or when you want to shape the light.  If you're just using it as an area light for video, or if you're in a very small room where they light will bounce around anyway, you could certainly just use it without the softbox on.

The light has the ability to choose whether you want all, 1/3, or 1/2 of the lights on the panel turned on, which is really handy. 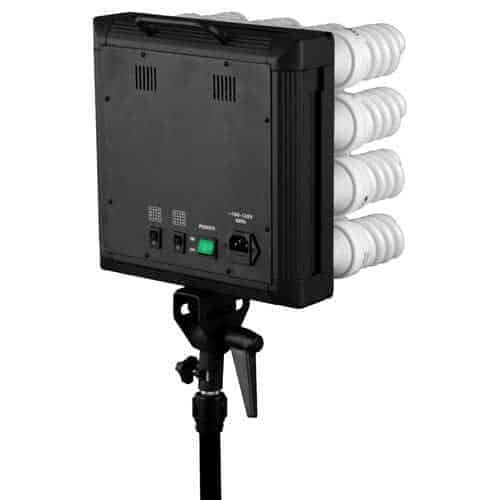 The only problem I had with the build quality is that on the very corner of the reflective metal on the bulb side of the panel, one of the spokes from the softbox bent in the corner just slightly.  The corners aren't totally protected, but it's just cosmetic.  The bent corner is very minor and won't impact the longevity as far as I can tell.

The softbox that comes with the panel is quite large.  It has four metal spokes coming out of the corners of the softbox which form the frame for the softbox.  There is an inner and an outer diffusion panel.  The softbox is adequate if you'll be keeping it in one location and not taking the softbox on and off frequently.  It was kind of a pain to get set up (and of course there are no directions in the box) and the spokes fit so very tight that it wouldn't be realistic to use this as a light that you take down after every shoot unless you're very patient.

The light itself is VERY heavy and made out of pretty solid metal.  Don't expect to use this on a cheap light stand that isn't sandbagged down.  This is a lunker.

The back of the panel has two vents for keeping the internals of the panel cool.  There is a large lighted power switch and two other switches that control which lights are turned on.

I'm really happy with the light stand mount on this panel.  It's very strong and is infinitely adjustable so you can get the light in just shining at just the right angle.  I was concerned that with such a heavy light, the mount wouldn't be strong enough to keep the light steady, but the mount is plenty strong.

I've used many continuous lights in the past, and my biggest complaint with using CFL bulbs is they get too hot!  Even with only 6 or 8 CFL bulbs turned on in a bedroom-sized room for an hour, the room is swelteringly hot!  So I decided to go for LED lightbulbs, and I'm glad that I did.

I have found the LED bulbs to produce much more consistent light.  They turn on instantly and don't dim or yellow over time like CFL bulbs have a tendency to do.  Many CFL bulbs tend to start bright and then dim as they heat up and are left turned on for more than 5 or 10 minutes.  They are also FAR more durable and won't smash into a million pieces if the bulb gets hit as you're moving around the fixture.  The other thing is that CFL bulbs have dangerous gases inside them.  It's normally a small risk, but when you have 16 of them in a fixture and that fixture breaks near a baby during a baby photography shoot—it's NOT good!  So I thought it'd be more prudent to get the LEDs.

The other thing I don't like about CFL bulbs is that they don't really last very long.  And when they cost $7-10 per bulb, it's pretty pricey when you have to replace 16 of them.  It turns out that at least in my testing, going with LED was CHEAPER than the CFL bulbs, which really aren't suited to photography which needs consistent color temperature and brightness.

Anyway, I chose the Phillips daylight balanced LED lightbulbs (Affiliate link to Amazon) and I've been very happy with them.  They are 1500 lumens each, so it makes for an extremely bright fixture.

The other thing to consider is the power draw.  If you're drawing SIXTEEN high powered CFL bulbs, you're almost certain to trip the breaker.  Using LEDs draws MUCH less power so it's significantly safer and more reliable.

Is Continuous Light a Replacement for Flash Photography?

The answer is generally “no” as far as I'm concerned.  Continuous light is of course needed for video (a quick pop of light from a flash wouldn't do much good for video…), and it also has uses for still photography because it allows you to move the light around and immediately see what the photo will look like.

There are two main problems with continuous light for still photography, though.  First, you're quite limited on where you can place the lights, because if they are in the direct line of site of the person you're photographing, their eyes get squinty.  The second problem is that they are not nearly bright enough for outdoor photography except for as a light fill when placed very close to the subject.

Those two problems make continuous light only suitable to some types of photography, in my opinion.  I think baby photography is BEST with constant light because the flash pops tend to scare the baby, and the warm continuous light is nice for the baby.  It also makes good sense for tabletop product photography, where the subject won't be squinting and you can shoot indoors.  But for most photography, I still recommend flash.