ISO invariance is an exciting new frontier in photography, and I've been experimenting with it extensively over the last few days to see if it's a technique that I can add to my photography tool belt (Fine… I admit it.  I've never even worn a tool belt.  I'm the worst handyman on the planet.)

In essence, ISO invariance allows the photographer to entirely skip over the ISO when setting the exposure and never changing it, but still being able to take full advantage of the low light performance of the camera.  It's still a brand new concept (the first mention I could find of it online was in 2011), and really nobody started talking about it until DPReview started publishing more information about it 6 months ago.

What is ISO Invariance (An ISO-less Camera)?

The short answer is that ISO invariance means that a camera will produce the exact same image quality by staying at ISO (or whatever the base ISO is on the camera) and dramatically underexposing the photo and then brightening it up again in Lightroom, as if you had shot the camera at the proper ISO in the first place.

It makes your head spin for a minute, but don't worry.  We'll go through lots of examples and it'll make sense shortly.

Let's suppose you want to go out and shoot a photo of the stars.  As a starting place, suppose we set our camera settings to f/2.8, 20″ shutter speed, and ISO 3200.  Those are pretty standard settings for night photography, and they'll likely produce a nice image.  But what if you kept the shutter speed and aperture the same, but dropped your ISO to 100?  The resulting photo is dramatically underexposed, but if you take that underexposed file into Lightroom and bring up the exposure, it suddenly looks identical to the photo shot at ISO 3200.  Increasing the exposure in Lightroom introduces noise, but just the same amount of noise as the high ISO would have introduced.

Thus, we say this camera is ISO invariant (“invariant” means something that remains unchanged despite different circumstances), or sometimes photographers say the camera is ISO-less. 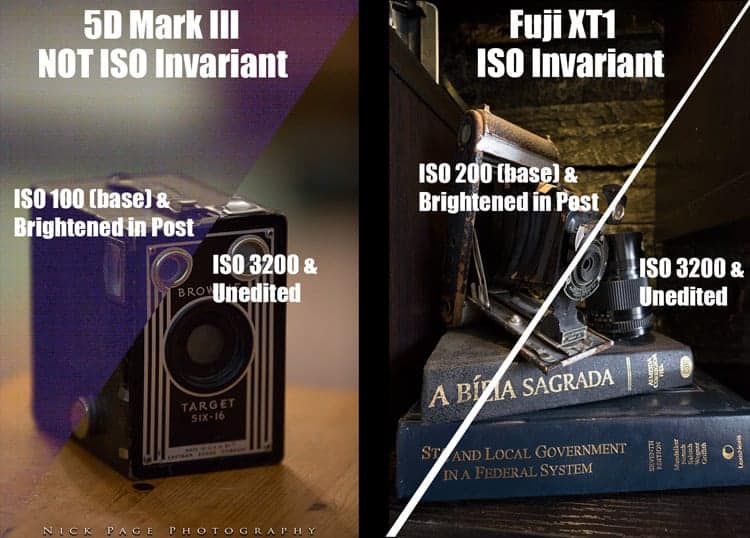 What Cameras Are ISO Invariant?

First of all, a disclaimer.  Just because a camera fits in the “ISO invariant” category below doesn't mean it's precisely the same thing to shoot at ISO 100 and brighten vs shooting at a high ISO.  There are slight differences in how the files look with some benefits and drawbacks to each.  What we're focused on here is the levels of noise and reasonable dynamic range and highlight/shadow detail.

So you can't PROVE that any camera fits in any of these camps, but I made my best judgment call given the test results we got after I polled the Improve Photography Podcast listeners and asked them to send me their raw file tests using many many different cameras.

Cameras that are ISO Invariant

Cameras that are Somewhat ISO Invariant

Cameras that are NOT ISO Invariant

Why Would Anyone Want to Use This?

There are lots and lots of reasons why this would be a fantastic technique in certain situations.  It's not something I'd use every day, but it's certainly a technique I will implement in my night photography.

One of the reasons is that by brightening the exposure in post, you can selectively brighten some areas and leave others darker.  This reduces the noise in some areas of the image, whereas if you set the ISO high in camera, it makes all of the photo have the higher amount of noise.

Another reason why you'd want to shoot an image at base ISO and brighten later is when you are concerned about preserving highlight detail.  Suppose you're in Time Square in New York and you want to take a shot of the colorful lights above the streets at night.  If you shoot at a high ISO to properly expose, there isn't enough dynamic range to properly preserve highlights and still expose the shadows. However, if you do this after the fact, you could easily brighten the image without blowing out highlight detail in the bright signs.

Another reason is when shooting night photography.  It can be difficult to judge how much noise is present in a photo when you're just looking at the tiny preview on the LCD of the camera.  Many times I've ruined night photography shoots because I pushed the ISO a little too high for the camera.  If I would have simply shot the whole night at ISO 100 and brightened later, this would not have happened.

The limitation to shooting at base ISO and brightening later, however, is that you'll see a black preview on the back of your LCD all night.  Makes it kinda tough to judge the composition!  So I plan on flipping back and forth.  Use high ISOs on my Fuji XT1 for getting the composition, and then once I have the shot looking how I want, I'll shoot one at base ISO (which is 200 on the Fuji XT1 but 100 on most cameras) and keep that one for the official shot.

What ISO Invariance (ISO-less Shooting) Is NOT

ISO invariance is not a measure of how good a particular camera or sensor is.  It simply means that a lot of the exposure is generated with the image processor rather than in the sensor.  It's simply a different approach to low light photography.

So while I do think ISO-less shooting is an exciting new technique for low light photographers (doesn't make a lick of difference for daytime photography), it's certainly not worth picking a camera simply based on its ISO-invariance.

66 thoughts on “ISO Invariance: What it is, and which cameras are ISO-less”