Not every photographer needs to have a set of studio strobes. But, for those who do, finding an inexpensive alternative that is actually usable can be a challenge. That’s why I’m reviewing the very usable, and relatively inexpensive, Neewer 180. Prices range from about $50.00 per strobe (on Amazon.com) to just under $250.00 for a three strobe kit that includes umbrellas and stands.

As the model number suggests, the strobes are rated at 180 watt seconds. The higher the watt seconds, the more power is available. For head shot portraits or small product photography, two of these strobes will likely be sufficient. For large group shots, or any subject needing small apertures, adding an extra strobe may be necessary. More powerful units are available from several different manufacturers, but for a photographer on a tight budget, it’s easy to work within the constraints of the 180ws rating.

For perspective, many studio strobes are in the 600 watt second range, so this is a very low power strobe.  For indoor shooting it will likely be fine, but if you want to shoot outside, this likely isn't the right choice.  If you're looking for a more advanced strobe like this, then I highly recommend the Einstein 640s.  They cost about $500 per strobe, so it's quite a bit more expensive, but also a significant bump in quality.  You might also consider the 300 watt second Neewer studio strobe if you want better performance without too much of a price increase.

The strobes are powered by A/C, meaning you need to plug them in. There are no batteries, so an extension cord and power strip may be helpful. The strobes have a built in modeling lamp, making set up a breeze. Put your strobes on a stand, add an umbrella or softbox, and arrange your lights and subject while being able to see where the shadows and highlights are.

The Neewer 180 has a variable power control. Dial in anywhere from about 10% to 100% power to balance your lighting set up. They can fired several different ways. Each strobe has a built in slave. This way, except for your power cords, no other wires are needed. Using a small flash mounted on the camera, you can set that flash at the lowest manual power setting. I like to bounce it up out of the way also. The on camera flash will fire the strobes via their built in slave at quite a good distance, depending on ambient brightness.

A couple of other options for firing the strobes are via a synch cord or the wireless flash trigger RT-16 that comes in several of the lighting kits. If using a synch cord, only one strobe needs to be connected directly to your camera. Let the other strobes release via their slaves. Also, be sure to check your camera manual before plugging a synch cord. Some cameras may not be able to safely use a cord connected external flash of a different brand.

Since these are manually set strobes, no TTL auto exposure settings will work. The camera shutter speed and lens aperture will need to be set manually. Using your histogram or the image preview will allow you to set up and fine tune your settings. Be sure not to exceed your camera’s flash synch speed.  That sounds like a serious limitation, but realize that most studio strobes (even the expensive pro quality ones) are manual.  It really isn't that hard to look at the camera and if the flash is too high, reduce the power.  It's that simple.

In use, the Neewer strobes are very lightweight and are easy to mount on standard light stands. They have a tilting mount for directing their output. A built in mounting hole for the umbrellas makes adding those a breeze. They also have a lip around the front of the strobe for attaching most brands of small softboxes. They are durable enough to have survived transport to many location shoots since I first purchased them. I have not even had to replace a bulb yet, yet when I do, even that is a very straightforward and simple operation.

Durability of these strobes is a serious concern.  While I haven't had any trouble with my strobes, other reviewers on Amazon have.  In all, about 10% of the reviewers on Amazon gave the product 1 or 2 stars.  That is a significant number, but it also means that the vast majority are happy with the strobe.

The Neewer 180 system of strobes makes a fine first studio set up, or an excellent traveling studio for photographers needing a light but versatile kit. 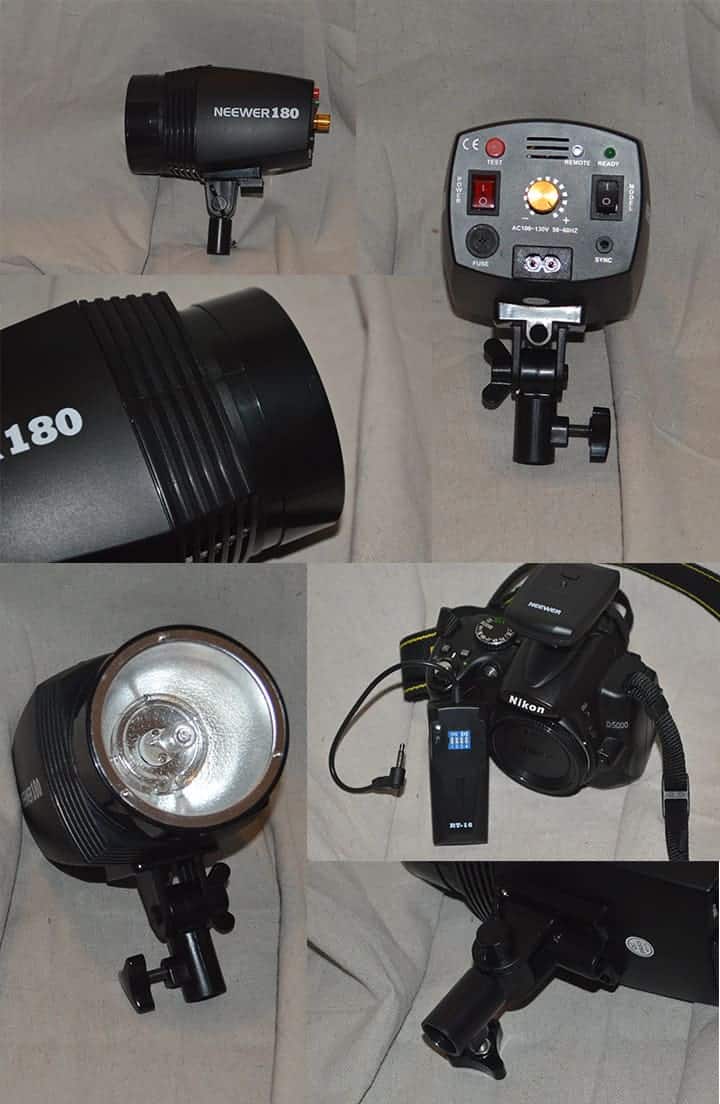