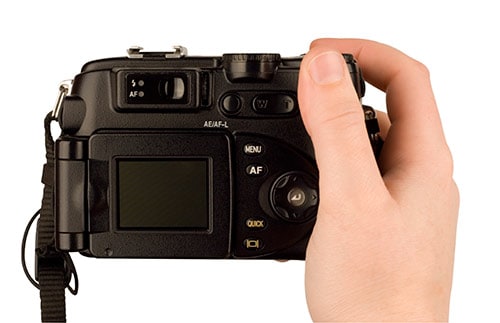 Interchangeable lens cameras (ILC) are some of the newest types of cameras on the market. Since the first ILC was introduced in 2004 with the Epson R-D1, the market has exploded with models from all the major camera manufacturers. But what is an ILC and how does it differ from other types of cameras like compact point-and-shoots and Digital SLRs? Read on to find out.

ILCs have a lens mount, just like a DSLR.  The lenses are attached and detached from the camera so you can use different optics on the same camera.  The physical mount itself facilitates the connection and communication between the lens and the camera body. Most ILCs available today have lens mounts created just for ILCs. Among those mounts are the micro four-thirds mount from Olympus and Panasonic, the NX mount from Samsung, E mount from Sony, 1 mount from Nikon, Pentax's Q mount, Fuji's X mount, and Canon's EF-M mount.

ILC camera bodies are designed to be small. Manufacturers can make small ILCs because they lack the primary reflex mirror of a DSLR. This means no optical viewfinder, and no large pentaprism hump on top of the camera body. ILC cameras use their rear screens as viewfinders, though some models include an eye-level electronic viewfinder.

ILC sensors come in a range of sizes. Some like the Pentax Q system have sensors the same size as compact point and shoots, while Sony's A7 and A7R have full-frame sensors. Putting a smaller sensor, allows camera manufacturers to make smaller cameras.

There are many benefits possessed by ILCs. The biggest benefit is their small size. With the right type of lens, an ILC can fit in your pocket and give you image quality on par with a DSLR. Try that with a Canon 70D or Nikon D7100.

Despite being so small, most ILCs carry a sensor larger than that of a compact point-and-shoot. A larger sensor will give the photographer better image quality and lower noise than the tiny sensors in a point-and-shoot.

Another benefit of ILCs is that you don't have to be just limited to lenses for your particular system. Because of the lack of mirror, adapting lenses for other lens mounts is easy with just an adapter ring. Do you have a lot of old Canon FD glass? You can get an adapter ring for your Sony NEX and attach your old lenses and get continual use out of it. However, putting lenses for other mounts on an ILC comes with its limitations. You will have to use the old lenses in full manual mode, so no autofocus and no auto aperture control.

ILCs do have their drawbacks. Because there is no optical viewfinder, a photographer has to use the rear screen or electronic viewfinder. Both of which update slower than the instantaneous optical viewfinder. Although, a screen or EVF allows you to see exactly what the picture will look like before you press the shutter. Plus, if your ILC has an articulating screen, you can put your camera at angles that would not be possible with an OVF.

Another drawback of ILCs is that lens mounts are typically incompatible with the lenses you might already own. You can't install a Nikon F mount lens onto the Nikon One system camera. I say typically because Pentax did make an ILC, the K-01, that uses the same K mount as their DSLRs. However, the K-01 was not as compact as other ILCs. The good news is that adapters are available. Own a Sony NEX and a bunch of Nikon F mount lenses? There's an adapter for that. Have a Panasonic micro four-thirds ILC and old K mount lenses. There's an adapter for that. Although, as mentioned before, you typically lose autofocus and auto aperture with an adapter.

ILCs are a fast-growing segment of the camera market and manufacturers are making it a point to get rid of the drawbacks of ILC systems, such as slow autofocus, to make them a viable alternative for all shooters. Their compact size and image quality make them an ideal option for the shooter who wants the image quality of a DSLR without the bulk.

I have tried a number of different interchangeable lens cameras, but right now my favorite is the Samsung NX30.  I love the wifi features, how it packs in many of the DSLR-like features, and the reasonably priced lenses.  But the biggest secret in interchangeable lens cameras is the older Samsung NX 1100.  It's a few models older so the price is ridiculously cheap, and it stacks up well against an entry level DSLR.  This older version had more buttons on it like a DSLR, whereas the newer ones removed some of the buttons, which makes it tougher to shoot with the professional features.  Jim bought one for his wife and she loves it!

1 thought on “What is an Interchangeable Lens Camera?”