What do you get when you cross-pollinate a compact camera with a DSLR? A mirrorless camera! 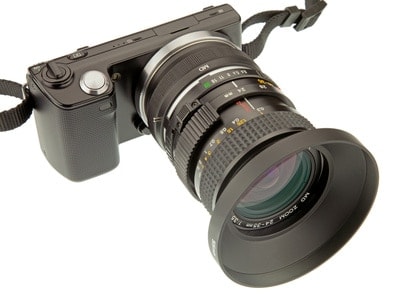 Take the size of a compact camera and the image quality of a DSLR and you have a new hybrid class of camera: the mirrorless camera. A mirrorless camera is just that – a camera without a mirror in it. Mirrorless cameras go by several different names, compact system cameras (CSC) and mirrorless interchangeable lens cameras (MILC) to name a few. Mirrorless cameras first came onto the scene in 2008 (when Panasonic and Olympus introduced the Micro Four Thirds system) but didn't start gaining in popularity until around 2011. These cameras are targeted to amateur photographers who want to step up from a compact camera and have interchangeable lenses but don't want the bulk, heft and complexity of a DSLR.

DSLRs use a mirror to bend the light from the lens into a viewfinder so you see what the camera sees. When you fire off the shutter, the mirror flips up, the shutter in front of the sensor opens and the sensor captures the image. With a mirrorless camera, the light passes from the lens directly onto the image sensor, similar to the way point-and-shoot cameras and smartphones work. There is an LCD screen on the back to preview the image. Most mirrorless cameras don’t have a viewfinder. Because mirrorless cameras have no mirror and use a different shutter mechanism, they have a simpler construction allowing them to be smaller and more compact.

With the mirror out of the way, mirrorless cameras can offer a larger sensor – and a larger sensor means better image quality. (Large sensors have more to do with image quality than megapixels.) Most compact cameras have a sensor that is decidedly smaller. Without a mirror in the camera, it eliminates the possibility of camera shake (camera shake is when the mirror flips up and creates some movement or vibration, potentially causing your photos to lose sharpness).

While mirrorless cameras aren’t exactly pocket-sized, their size, price and variety of options make them an attractive alternative to the DSLR.

1 thought on “What is a mirrorless camera?”