No – we're not talking about that kind of graduation. Instead, “graduated” when referring to a graduated neutral density filter (a GND), relates to the darkness of the filter. At one end, the graduated neutral density filter is dark, and at the other end it is light. Between the two ends is where the graduation (or gradient) occurs, so that there is a nice smooth transition between light and dark (as opposed to a hard line if it just went directly from dark to light). 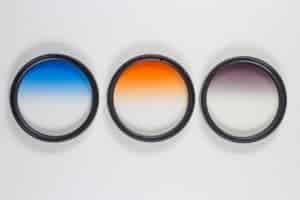 Since you know that a neutral density filter darkens the scene, you can probably guess what is going to happen when you use a graduated neutral density filter on your camera lens: instead of the whole scene darkening, only part of it will be dark, and that darkness will transition to light at the other end. There are some times when this effect is really, really helpful.

You might be wondering where to get a GND filter. We have a recommended gear page that will point you to one (and only one) graduated neutral density filter. Why only one? Well, because really, a screw-on GND filter is pretty much a waste of your money and we're not going to recommend any of those. Think about it: you can see from the image above that the transition from dark to light happens right at the center. When you've got this filter screwed on to your lens, that puts your horizon squarely in the center of your photograph (which we all know doesn't follow the rules of photo composition and will produce a rather boring photograph).

Instead of using something that you have to screw on to the end of your lens, you are much better off getting a GND filter that you can place in front of your lens and control where the transition occurs. That way, if you want the horizon to be on the top (or bottom) third of your photo, just scoot the filter up (or down) a bit until it lines up. Trust me – you'll be much happier with this than with a screw-on GND filter.

1 thought on “What is a Graduated Neutral Density Filter?”