Some photographers, like portrait and sports photographers, never or rarely use tripods; however, anyone who wants to shoot landscape, night, or wildlife photography rely heavily on a solid tripod.

Frankly, most tripods are absolute junk.  I've purchased about 9 tripods while moving up the ranks of photography.  Some of them simply weren't sturdy enough, others were too heavy or inconvenient, some weren't durable, and some were fantastic.

I spent several thousands of dollars on different tripods trying to find a “deal” until I finally realized how many junkie tripods I had bought and money I had wasted. I finally invested in a high quality tripod, and it has lasted the test of time.

This page is full of the information I wish I had back then.  I've spent the last few years testing and reviewing dozens of tripods and putting them through their paces, and these are the absolute cream of the crop.  But “cream of the crop” doesn't have to mean expensive.  I've found lots of great tripods that are reasonably priced that are actually better than the expensive stuff.

I'll recommend several tripods to you below and let you pick the one that best fits your situation. 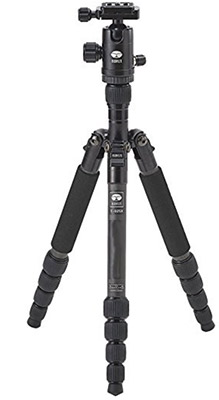 If you have only $200 to spend, then I can highly recommend the Sirui T-025x Tripod and Ballhead combo on Amazon.com.  Yes, I know it has a weird name.  It's pronounced “Soo-ray”, and it's a Chinese company that makes extremely high quality tripods and ballheads for very reasonable prices.

Another thing I like about the head on this combo is that it's Arca-Swiss compatible.  That means the little quick release plate that screws onto the bottom of your camera is a standard shape and size so you can buy an l-plate for your camera and much more easily attach the camera in portrait orientation.  Read more about L-Plates here, and GET ONE for your camera!  You won't regret getting the L-plate.  Every serious photographer I know uses an L-plate.

The Feisol is like a dream.  It's incredibly lightweight with its carbon fiber frame, it has no center column so it can get down right to the ground, it's a tall enough height to comfortably reach to the eye line of most adults, and it's priced reasonably if you compare it to the competition.

The Feisol is my favorite tripod of all time.  It's lasted many many airports, being dunked in salt water, dragged over the black sand beaches of Iceland, falling in the water in China, etc.

I've compared the Feisol to all the top tripods.  The Really Right Stuff Tripods are amazing, but significantly heavier than the Feisol that I like.  The Gitzos are hit and miss with durability, but have great features and specs.

The Feisol usually runs around $400, but you can check the current price on Amazon here.  Read Jim's full review here.

Not sure what a ballhead is? Click this link to find out all about ball heads.  It's the piece that attaches the camera to the tripod.  Pro tripods don't include both pieces generally.

I promise it'll be worth it to buy a nice ballhead. You can certainly find many inexpensive ballheads, but I promise they'll eventually wear out over time and break on you.  I think I bought 6 or 7 ballheads before I finally wised up and bought a pro quality head. 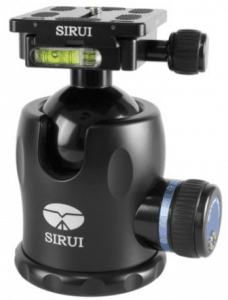 There is only one ballhead I'd recommend that does a really nice job at a budget price range.  It's called the Sirui K10X.  “Sirui” is pronounced “Soo-ray” (I know–weird).

When I teach workshops, about half of my students show up with this ballhead.  Great budget option.  It's still not cheap, but it's the cheapest one that will last you for several years without issue.

I'm currently shooting a RRS BH-40 ballhead.  It has been super reliable, strong, and reasonably lightweight; however, it really has no cool features.

If you're buying a new ballhead today and you want one that will last you forever and that will definitely perform for you, I'd buy the Really Right Stuff BH40 Ballhead with lever release and full-size clamp.  It's definitely pricey, but if you want the very best, I think that's it.

If you're purchasing a ballhead, I HIGHLY HIGHLY HIGHLY recommend you also get an L-plate.  The good news is that an L plate is very inexpensive, but they will make your ballhead much more useful.  I wrote a complete post about what an L Plate is, where to buy one, and why I never shoot without an L plate. 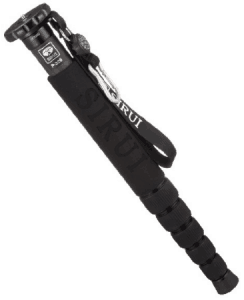 I haven't tested nearly as many monopods as I have tested tripods, but the one I bought four years ago is still going strong, is remarkably sturdy even with sideways pressure like when holding flashes, is lightweight, and collapses very small.  I'd definitely recommend it.

The thing I like about this one is how sturdy it is.  I've shot with a 600mm on this monopod–no problem.  It also is strong enough to be used as a light stick for flash photography.  Many monopods aren't strong enough to handle the sideways pressure of holding a flash extended with a heavy modifier, but this one handles it well.  Highly recommended.

Check the current price of the Sirui P-326 on Amazon.

66 thoughts on “The Best Tripods, Ballheads, and Monopods”