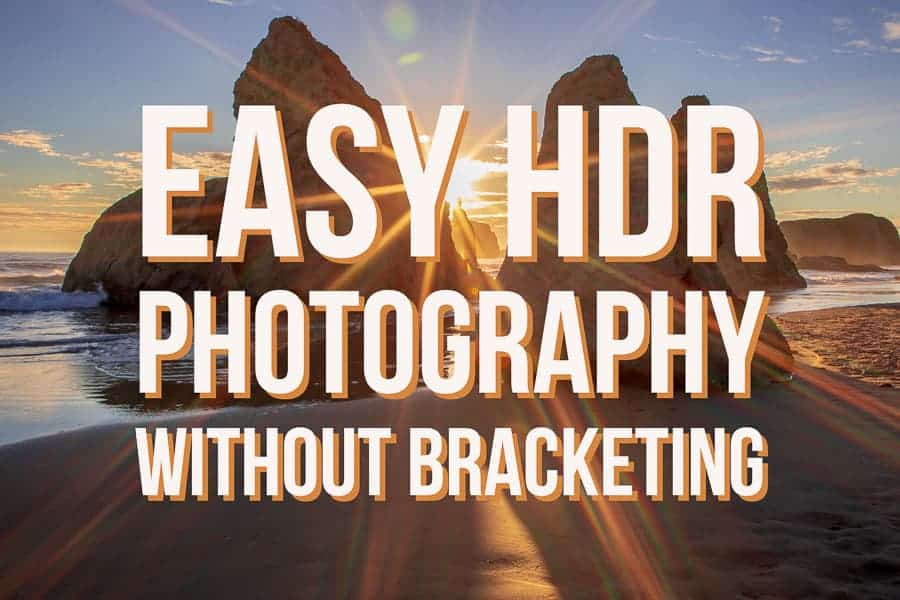 Easy HDR photography without bracketing is about using a single image, rather than a set of images to capture more detail in your scene. In a given scene, there may be a desire to capture details in both the very bright and very dark areas of that scene. Modern digital camera systems have come a long way in allowing the photographer to capture this detail.

It turns out that HDR is more than just that mode on your iPhone that seems to work magic. It’s also more than those gaudy, over-processed images you sometimes see in your Instagram feed. Sometimes, it even seems that there is general confusion on what HDR is.

So, what is HDR Anyway?

HDR stands for “High Dynamic Range”. Simply put, it’s an image’s ability to retain detail in the dark as well as the light areas in the image. Images are obviously captured by a camera system, so references are made to a camera’s dynamic range. This refers to the camera’s ability to capture and retain data from the very light to very dark.

Equipment matters. Some camera systems are better than others at capturing detail across a wide range of tones. According to the PDR (Photographic Dynamic Range) Charts at Photons to Photos the Phase One IQ3 100MP sports the highest PDR at just over 13 stops. This means that the difference between the darkest usable areas of a photo and the brightest usable areas is equivalent to 13 stops of light (39 clicks on the adjustment wheel of most cameras). If you don’t have $50K+ to drop on a camera system, don’t fret, most popular DSLR and Mirror-less Full Frame cameras come in around 10.5-11.5 stops. This should be enough to capture your vision.

It has become common for photographers to utilize multiple photos to capture a wider dynamic range in a scene. Imagine a scene with very dark areas where detail is important and a bright background with color and detail that needs to be captured to meet the artist’s vision. A sunset scene comes to mind.

This method of capture involves taking 3 or 5 separate images in succession (bracket) with one “standard” exposure one underexposed and one over exposed image. The photos are then processed though some sort of HDR software system which uses data from all three photos to create a starting image with very low contrast and detail throughout the tonal range.

From this point, the artist takes over and starts adding contrast back into the image selectively and making other adjustments as necessary (or not). HDR has gotten a bad rap in recent years, not because there is anything inherently wrong with the technique (it's just a tool) but because of a sort of ebb and flow of taste in art.

The reason this type of photography exploded in popularity is because, to some degree, it emulates human vision. For reference, the human eye is capable of somewhere in the neighborhood of 20 stops of dynamic range.

In many circles, this type of photographic capture technique and processing has plummeted in popularity. Likely due to the fact that it is easy to “over process” these images and create a final product that goes beyond reality and into the realm of surrealism.

There are other pitfalls of a multiple exposure capture. For example, if there is a moving subject, or the camera moves slightly between exposures artifacts will be created and problems will arise.

It is the aim of this article to help photographers to utilize the full dynamic range of their cameras and when possible, get the shot with a single shutter actuation and then process that photo in a way that achieves the artist's vision.

Expose to the Right

This is a phrase that can cause confusion among photographers. To some, it simply sounds like over-exposing. Another phrase is “protect the highlights” which sounds more like under-exposing. So, what is it anyway?

Exposing to the right simply means to expose your photo while yielding mainly to the right side of the histogram. In other words, exposing based on the brightest parts of the scene. If the bright parts you care about are blown out (too bright), they will clip meaning all detail will be lost in them forever.

The reason for doing this is to take advantage of the way your camera works. Cleaner images with less noise come as a result of exposures where more overall light is collected. By pushing the exposure to the limits and coming just short of clipping the highlights in the image, the darker areas are also brightened up. This means that less exposure will need to be added in post processing and less noise will show up as a result.

Exposing this way ensures that the full dynamic range of the camera is used and the data captured is as clean and noiseless as possible.

To effectively expose to the right, a tripod may often be required. This method utilizes longer exposures and/or larger apertures. In a landscape scene, it may be preferred/required to use the lens stopped down to a smaller (larger number) aperture, so exposures can get fairly long. Though, depending on the situation, the tripod may not be required.

Pro Tip: Enable “highlight alert” on your camera. Often referred to as “blinkies”, this feature will show clipped highlights in your photograph in review as blinking white and black areas. Darken your exposure (faster shutter, or larger f/stop number) until the areas you care about no longer blink.

Ok, so this part is critical. There are some possible benefits to shooting in JPEG modes, but to capture the full dynamic range capabilities of your camera, RAW shooting is required. Aside from post-processing latitude (related to dynamic range) the main benefit of RAW is greatly increased dynamic range.

Shoot at the lowest native ISO your camera is capable of (usually around 100 or so). The reason for doing this has nothing to do with noise. Contrary to popular opinion and belief, high ISO does not cause noise in an image. Noise can be thought of as ever-present and it shows itself when there is insufficient exposure (shutter speed, aperture). That is, when not enough light hits the sensor, noise shows up.

The true pitfall of increasing ISO (again, it’s NOT noise) is a decreased dynamic range. And it decreases QUICKLY. Just take another look at those charts from Photons to Photos. Shooting at base ISO gives you the most native dynamic range with which to work.

So, you’ve got your photo. A scene with a lot of dynamic range and you’ve captured as much of it as possible by shooting in RAW at base ISO and exposing to the right. Now what? Well, options galore. The question, as always is; “What does the image need?”

Level 1: Single image in Lightroom Only

So, let’s start simple. This works if you’re using Lightroom as well as any other RAW processing software such as Capture One, On1 Photo RAW, Luminar, Adobe Camera RAW or any other of the myriad of options out there.

This can be as basic as modifying the tone sliders in your processing software. If you’ve carefully captured your image in camera, exposing to the right, you will likely be able to create a quality image by simply moving the sliders: Highlights, Shadows, Whites, Blacks, etc.

Any further adjustments can be done depending on your software of choice. Local adjustments and even some tools that mimic luminance masking can be applied

This one is a little outside the box and I've found that it produces very quick and easy results. The technique leverages the HDR processing built into Lightroom.

The way it works is by taking the photo, which has been properly exposed to the right and creating a “virtual copy” within Lightroom. Do this by ‘right clicking' on the photo within Lightroom and selecting “Create Virtual Copy”. You will see another photo appear in your catalog that is exactly the same. The program is not duplicating a file however, it is simply referencing the same RAW file and allowing different processing to be applied. If you've never used virtual copies before, you will find tons of uses for them.

Finally, with all photos (2,3 or more) highlighted, right click, hover over “Photo Merge” and select “HDR”. Lightroom will automatically blend the images together into a DNG file which can be processed further as an individual image.

For a bit more control, dual processing in Photoshop can be employed. If using Lightroom, process your image as in Level 2 with virtual copies and then highlight all images, right click and hover over “Edit In”. From here, you have some options. “edit in Photoshop” will simply load each file into it's own Photoshop workspace. Merge to HDR Pro will utilize the built in HDR software in Photoshop.

Alternatively, any other HDR software can be used. The same can be done using Adobe Camera Raw and processing the file differently each time it is opened to achieve the same effect. From here, process as you would any typical HDR shot.

Note: Depending on how you approach this method, you may need to export your processed photos and then merge to HDR in Photoshop to ensure that the Lightroom processing applied goes along to the merge.

This next level dives into the deep weeds of Photoshop a bit. It also requires some knowledge of how to manually blend multiple exposures within Photoshop. This process can often be aided greatly through the use of luminosity masks. If you aren't sure what any of that is, don't feel bad, but this level may be in your future rather than in your present.

If you're interested in diving into this world, I recommend starting with this article.

The photo is processed as in the Level 2 and 3 methods and opened in Photoshop as layers. From here, the image is blended by hand using layer masks to selectively apply each version of the image, grabbing detail only from the areas selected by the artist.

For added control, the layers should be opened into Photoshop as “Smart Objects”. This allows for tweaking of the RAW processing of each version of the photo even after it is opened in Photoshop. Check out this great article on Dual Processing for more details on this technique.

Whichever approach is taken to produce HDR photos without bracketing, great power will be unleashed in your photography. Leveraging the power of the modern digital camera while avoiding the pitfalls of traditional HDR, bracketed, multi-shot images will add a tremendous tool to your photography kit.