Why do Photographers Use Green Backdrops?

This is one of those things I have often thought about but never really understood – why do photographers use green backdrops? I didn’t know so decided to find out the answer to this question.

What is this technique of using a green backdrop called?

The technique of using a green backdrop is called chroma key photography. Chroma is the Greek word for colour. That is where it comes from. I didn’t know that!

Is this technique still used by photographers?

Chroma key photography is still used these days, but there are more alternatives around now than when this technique was introduced in the 1940s.

With the advances in digital technology this technique is used less frequently in stills photography, but is still used in videography, film and TV.

The power of masking and processing in Photoshop and other software these days means that you can replace a background without a green backdrop.

If you do use a green backdrop however it can make it quicker and easier to replace the background in an image. I guess Photoshop specialists will challenge this, but it makes sense to me to do this as a less advanced Photoshop user.

When are green backdrops used?

Green backdrops are used in any situation where you are intending on adding a background (different from the one where you are when you are taking the photos) at a later date.

Green backdrops have been used in the following situations

The most quoted use of green backdrops is TV weather forecasters. Despite the leaps in technology when you watch the weather forecast on the TV the presenter is actually standing in front of a green screen. The weather maps and all that good stuff is being added by the behind the scenes production staff.

I can still remember the scene in Anchorman 2 where the weather man can’t see the map and completely loses it!

How does a green backdrop work?

It is easier to separate the subject from the background if the background is a solid colour. Green is much less commonly found in clothes, and even more rarely in skin tones. This means that selecting the green colour to remove will not impact on other parts of the image.

Using a green backdrop can make it easier to add an alternative background which opens up endless possibilities for creative photographers.

Why a green backdrop?

Green (and blue) backdrops are used as they are the furthest colours from human skin tones. This came about in the post war era in film. Nowadays you could actually use any colour in theory as long as it is not present anywhere else the picture.

When you dive back in history the original screens were actually blue, but there was a problem with this – green backdrops were used as presenters tended to wear blue suits more often that green suits!

That is why bright green colour is a good choice as it is unlikely that you would find someone dressed in that colour.

But thinking about this you might need to get a blue backdrop if you were planning on doing St Patricks Day location shoots! Or you were photographing people with a strange taste in clothing.

Or the Irish rugby team.

Why are green backdrops more popular than blue backdrops?

Simple – because green clothing is loss popular than blue clothing. It really is that simple. And green skin tones aren’t that common yet – but you never know if the Martians do land we might have to rethink this technique!

Can I use other colours of backdrops?

Photographers use many backgrounds for different effects, but for this technique you can also get blue backdrops, but these are much less common. As I have said elsewhere, green is a much less popular choice of clothing colour!

Photographers also use grey backdrops for this technique of photography. Grey backdrops get eliminate the problem of green colour fringing around the edges.

Can I use green backdrops on location?

Is it difficult to do?
No. As with all new things it takes time and practise, but the technique is one that anyone can learn. I guess it helps if you have a reason to use this technique, which is why I have never tried it myself.

What do you need to carry out chroma key photography?

How do I use a green backdrop?

Basically, you stand your subject in front of the green backdrop. You need to make sure that the backdrop is big enough to cover the subject and the areas around the subject fully.

The important thing is that the subject is correctly lit, and that there is contrast between the subject and the background.

You can buy bespoke software, and kits that include everything you need including the software, but I suggest that Photoshop is all you need. Well Lightroom and Photoshop (if you work like I do).

But I will warn you now, you will need to use layers in Photoshop!

How much does a green backdrop cost?

Green backdrops are readily available – you can get muslin backdrops for less than £20 on Amazon, collapsible ones and full kits. The most expensive one that I found on Amazon was £420,

Check out this free-standing 4m panoramic background from Lastolite for just under £400! Now this looks pretty cool I have to say. 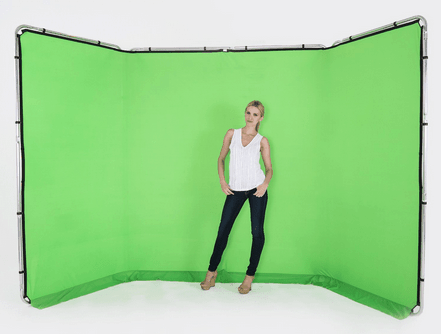 Have I ever used a green backdrop?

No, I haven’t, which is why I did not know the answer to this question. Now that I have learnt all about green backdrops I really would like to give this a go – the problem is that I don’t have much of a need for green backdrops as I mainly photograph buildings and locations!

But now I have learnt all about green backdrops and chroma key photography I am quite keen to give this technique a go.

I don’t often photograph people, certainly not in a studio environment.

I hope that you now understand green backdrops, and why photographers and videographers use them. If you have any questions or comments, please get in touch using the comments box.

And get in touch and share your experiences with green backdrops – good and bad experiences of course!

19 thoughts on “Why do photographers use green backdrops?”