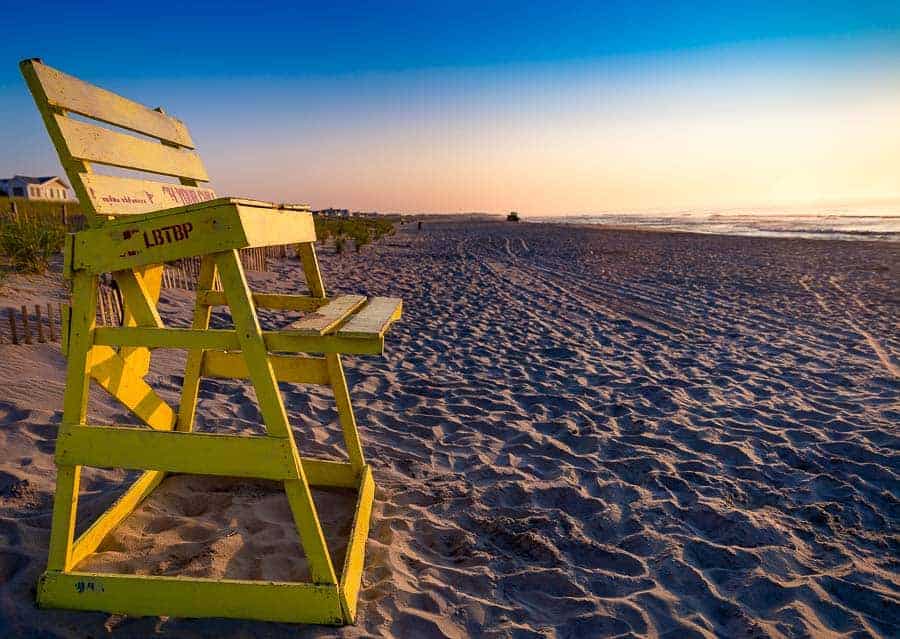 Maybe you live near the beach. Maybe you live a two-day drive away. You might tan like George Hamilton wrapped in Crisco oil. Or (like me), you might have to wear Larry Bird-level sunscreen with an SPF number so high it's expressed with an exponent. Maybe you love to swim in the ocean. Maybe you're afraid to go back in the water. But before summer ends, you have to go to the beach. You need to remind yourself of the elemental things about summer: the warmth of the sun, and the sound of the waves crashing onto the shore.

When you go to the beach, you don't go alone. You take friends and family. You take your beach chairs and sunglasses. Your coolers and umbrellas. A cheap paperback and your favorite beverage. And you should also take your camera. Though you need to take special care with your DSLR when you're at the beach, it's a great place for fun, creative photos and vivid memories.

Before you head out to be king of the (sand) castle, taking your DSLR along raises some special concerns about safety.  You don't want to come home with damaged camera equipment–or with no photo gear at all. 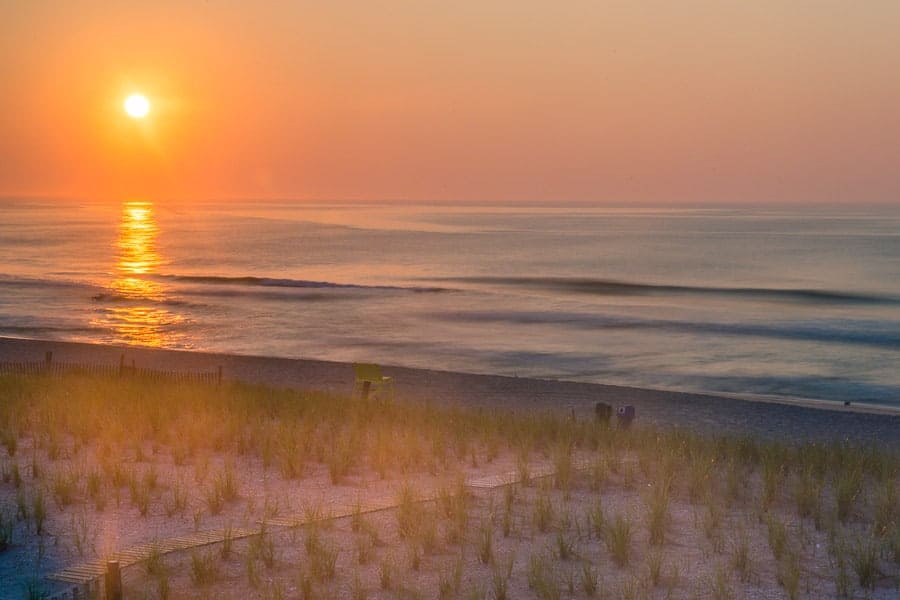 Protection from Sand. Sand is the most obvious risk of heading to a beach with your camera. Make sure your camera bag is zipped tight when you aren't grabbing gear. If your bag has a rain-cover, it can add an extra layer of protection from grit and sand.

Sand is not just on the ground, though, it's in the wind. Use your body to block the breeze whenever possible.  I often leave lens covers in my bag–but if the beach has a stiff breeze the day you're there, it's worth the extra time to slip the lens cover on until you're ready to take the shot. If you're taking shots of kids, remember that every eight year-old boy loves to throw sand.

Avoiding damages from water. Obviously, you should leave the under-water shots to the Go Pro crowd if you don't have a custom underwater housing for your DSLR.  But also be on the look out for splashing children, or the moisture that comes in from a rolling fog. And if you're into time-laps photography by the shoreline, losing track of high tide could have . . . unfortunate consequences. 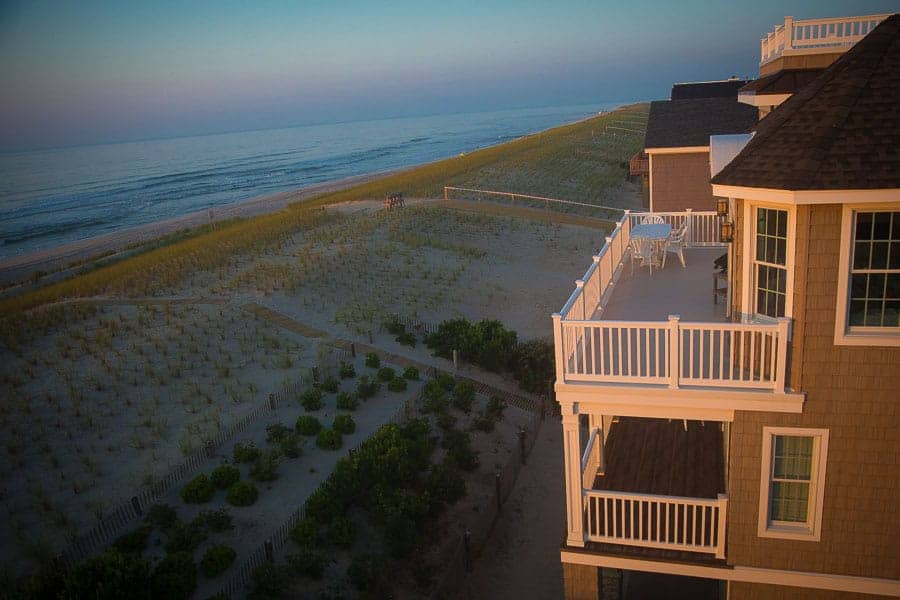 Protection from Sun. As photographers, we often eschew the mid-day sun, with its harsh shadows and models squinting their eyes.  But the direct heat can also be bad for your camera. Electronic components can overheat, memory cards can lose functionality, and the sun can damage a modern DSLR sensor. When you're not composing a photo, keep your camera body and lens under your favorite beach umbrella, wide-brimmed hat, or a dry towel.

Guarding against theft. A beach is a sneak-thief's Disneyland. Purses thrown carelessly under a blanket. Wallets stuffed to the bottom of a shoe. Let's be honest: it's not Fort Knox.  If you're going to take a DSLR to the beach for an extended period of the day, consider disguising your camera. For example, ditch the traditional camera bag for a small cooler. It tells a potential thief: “This container is full of Old Milwaukee and some kid's juice boxes, it's not worth your time.”

Once you're satisfied that you've sufficiently protected your gear, and that it won't be damaged by the elements or stolen while you're snorkeling for sunken treasure, give some though to what makes a memorable image of the beach. 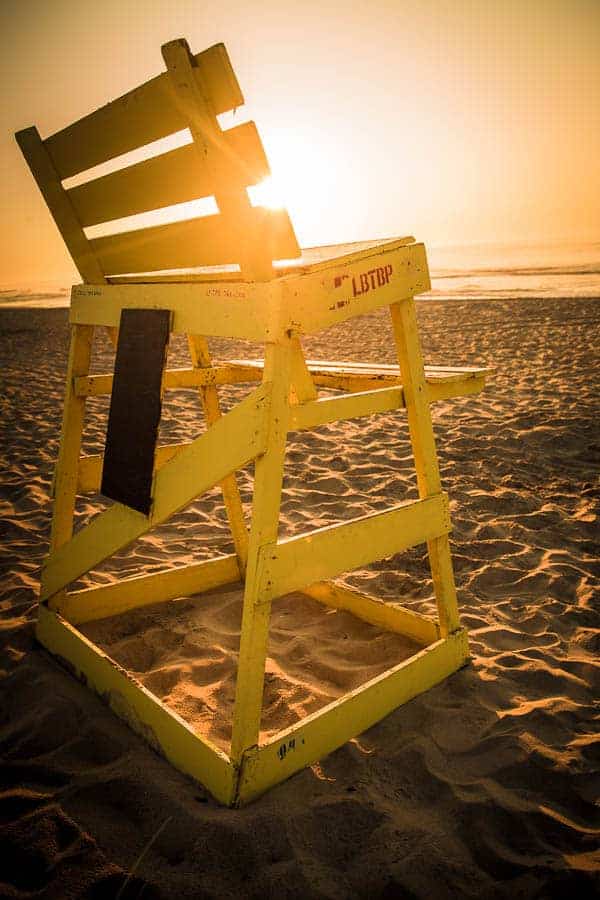 The Golden Hour is still golden. I think that the golden hour is even more golden at the beach. That's not to say it's colors are different–but beaches create a background uncluttered by trees, buildings, and other obstructions we typically have to deal with when we leave the studio. The uniformity of the visual background makes the quality of the light presented  on the image more impactful. There is a self-saturated quality to sand as it reflects golden hour tones.

Simplify the composition. There's already a lot to like about photographing a beach. Typically, the themes of serenity and peacefulness abound. A shoreline and horizon are instantly recognizable. Look to eliminate stray trash cans, lifeguard stands or beach umbrellas that are not part of your subject. This is particularly true if you're taking a portrait.

I have a bad habit. I want to mix portraits and landscapes a bit. I want to capture the portrait, and the waterfall, and the bridge, etc. Maybe I think that people are inherently boring and need nature or architecture to spice things up.  That kind of detail might work for unique locations. But a beach isn't the World's Largest Ball of Twine. It's a beach. To the viewer of your portrait, the background isn't really Maui or Long Beach, or Miami Beach or Lake Michigan. It's just a beach. Unless the viewer has been living in a bunker like Kimmy Schmidt, she's probably been to a beach. The background simply says “we're at a beautiful beach,” and it doesn't take twelve miles of shoreline and Big Sur and a lighthouse to make the point.  Sometimes less is more.

That's not to say that sand and water, without more, make for a great photograph. There is, after all, a fine line between simple and the mundane. If it's important enough to include, make it obvious. If it's not, then consider eliminating it. 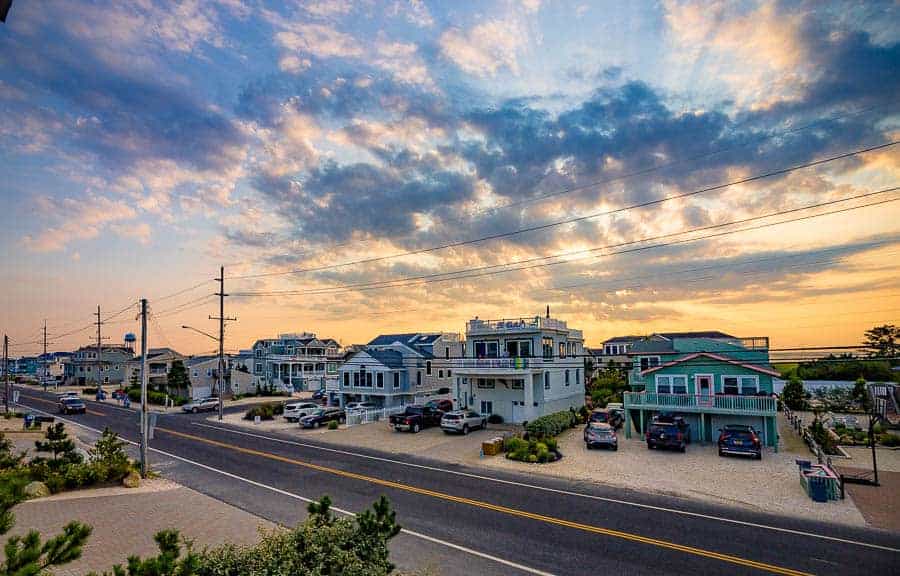 Avoid the crowds. One of the great things about photography at the beach is that the hours when the beach is most popular for sunbathers, surfers, and swimmers, it's least friendly to photographers.  Most photographers don't head out to a beach in mid-day, but that just means that there will be fewer folks to interfere with your photos as the sun sets. And for those beach bums who do stick around long enough to populate the background of your photos, there is an easy fix. The relative visual consistency of sand, surf, and sky allows for Lightroom's heal function to effectively remove them while post-processing.

Ramp Up the Action. Beaches aren't just for water sports.  It's a great location for forty-somethings to fondly (if inaccurately) remember what great athletes they were in high school!  Don't you want to catch the action when your college buddy pulls his hamstring? Okay, maybe not. But what about diving for the football? You'd never do that in the park, but the beach is more forgiving. It's only sand, Johnny Utah!

The action doesn't even have to come from humans.  In the images below, we used a beach ramp (formerly a sand sculpture of the Millennium Falcon) to send remote control cars flying. The sand spray from the wheels gave it a sense of action and fun! 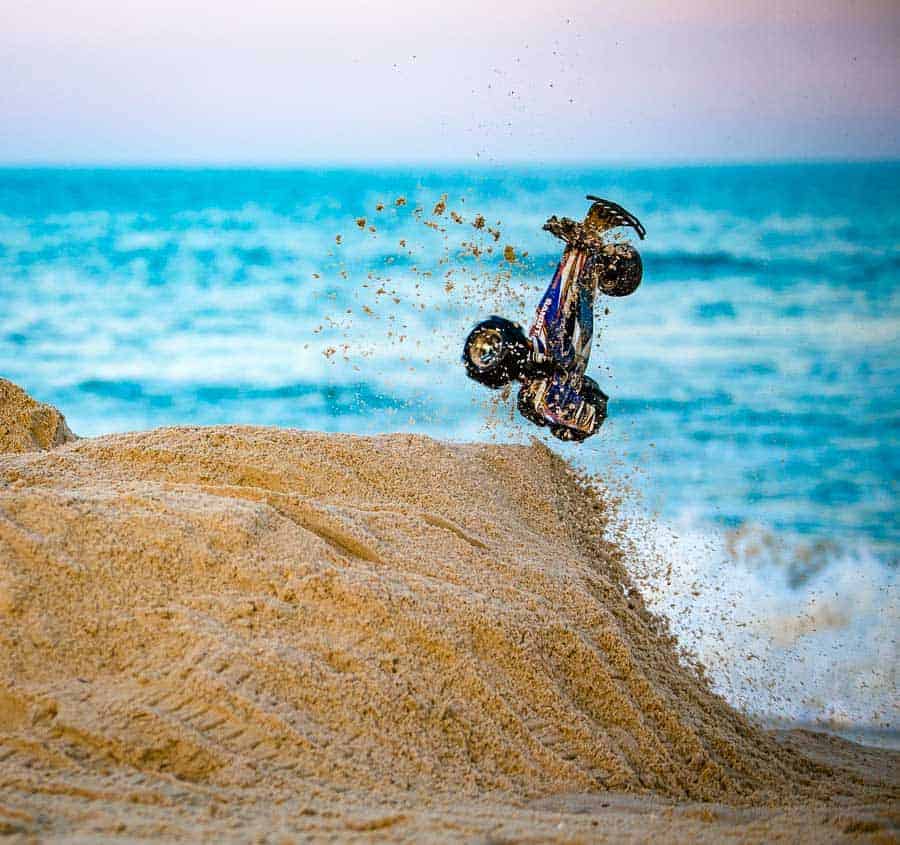 Get Creative. Beaches inspire creativity. But they also give it “breathing room,” since the familiar textures of sand and surf are so recognizable, using bold post-processing techniques won't distract or confuse the viewer.  Experiment with different angles or light. And don't leave the kids out of the mix!  In the silhouetted image below, I had a group of kids running up and down a hill as the sun was setting behind them. 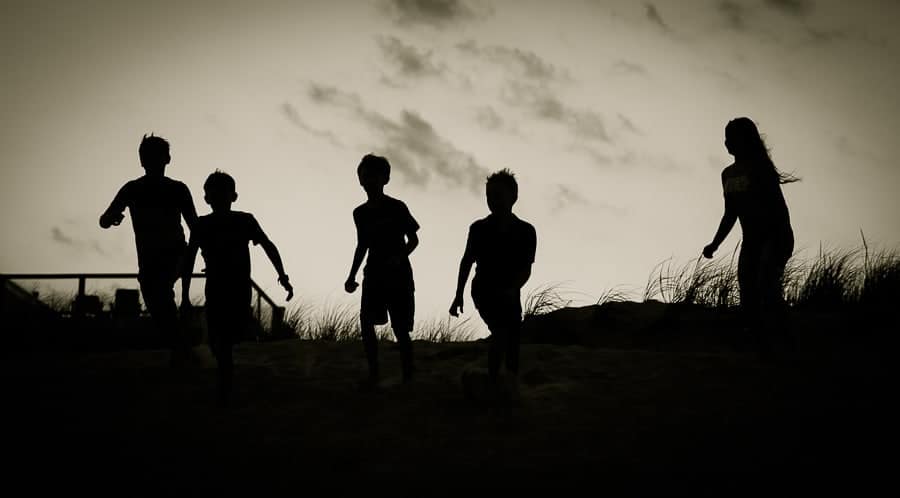 A Word of Warning: Be Sensitive to Skin

Remember, it's unnerving for some beach-goers to see a DSLR–especially with a 70-200mm or longer lens– winding its way among the bathing-suited. Public swimming is a socially vulnerable situation.  People who wouldn't bat an eye about being in the background of your photo while playing a round of golf or a pick-up basketball game might react with trepidation or outright suspicion if your “professional looking” camera is pointed their direction while they are walking on the beach or sunbathing.  Be particularly sensitive to this so that you don't unintentionally make anyone uncomfortable–a “sleeper creeper,” as it were.

Break out the compressed air and the makeup brush. After a day at the beach, you've got sand in all the wrong places. But it's not just sand you need to keep an eye out for. It's also the salt. If you're an IP Plus member, check out Brent Bergherm's video on cleaning your equipment for a detailed refresher course.

Beach recreation is practically synonymous with summer fun. But don't let nature and the elements scare you from taking your photo gear to the beach. Some forethought can help you make memorable beach images while keeping your equipment safe.