Film is not dead, folks. For some time many thought that film would eventually die out since digital is so much easier. Surprising to some, film is back, and on the rise. It's not likely that film will be used more than digital, do to cost and time. However, I am beginning to see more and more hybrid photographers that use both film and digital professionally.

Over that past year or so I have began to integrate film into my professional workflow. However, my editing style in digital never really matched up well with the profiles of film I was shooting. My film endeavors first began with Ilford's HP5 and Kodak's Portra. I have really come to love the profiles of these films and began to look for ways to simulate that in digital. 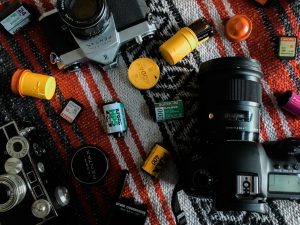 At first I went with VSCO, since it was the only company I knew of that made film presets. I used some VSCO filters here and there to get that true film look I was seeking. Unfortunately VSCO didn't quite hit the nail on the head with their presets in my opinion. I wasn't wanting the hipster style of editing associated with VSCO today, it's too cliché. The images looked somewhat like film, but it wasn't quite there for me.

A fellow wedding photographer told me about Mastin Labs. I was apprehensive because each film preset pack was one hundred dollars. I had my fair share of getting tricked into spending money on garbage presets. After some time of searching more, I came back to Mastin's site as I could not find anything that matched film closely, the way I wanted. I put forth the money, tried them out, and was blown away. They have a subtle film look, and don't look over-edited. They didn't have that hipster vibe to them. The just looked stunning.

Below I have created some before/after images. For each image I have applied the preset, and made some minor adjustments to my liking. Remember, presets can enhance your work, but don't necessarily make one a better photographer or make one's photos better.

Without further ado, lets dissect a few of these film presets, and why I love them so much.

Kodak Portra will always be one of my favorite films. It is a great film for portraits, and almost anything really. I use both film and Mastin presets for weddings and portraits, as well as skiing and landscape photography. I love the way the greens look in Portra. They are vibrant, but not too vibrant. Portra really makes photos pop with out having too much saturation or too much of an over contrasty look. I have noticed that with the Mastin preset, the oranges are often a bit too orange for my liking. I just bring the orange saturation slider down a few until it looks right. You don't want everyone looking like they got a bad spray tan! Overall, a very great film preset.

The pushed look has never really interested me.  Through my experience it seems that this pushing only looks good in certain situations. When it is done right, it's breathtaking. I would not suggest using these in harsh light. These tend to work best in the soft light (above) and strategically slight over-exposed images. The Portra Pushed pack add a lot more contrast to the images and can be too contrasty if not used right. With the correct lighting and exposure, adding the Portra Pushed film presets can really make an image pop.

Fuji's Pro films have been praised and used by wedding and portrait photographers for quite some time. They are a really good all around film and are well-known for their greens. Mastin has done a great job of replicating Fuji's color in their Fuji Color Pro Pack. Fujifilm makes skin tones look great, especially here. This film and film pack is really great for photographing people. The Fuji presets are super great overall. However, depending on the image being edited, the purple color tones may get overhauled on the luminance and look a bit odd. Luckily it is a simple fix, just slide the purple luminance slider back to desired location. Since this image above contains a lot of lupine (purple alpine plant), I did have to adjust the luminance slider slightly.

I love Ilford. Ilford films were some of the very first films that I learned how to shoot film on. The grain, the subtle contrast; theres just something about a good black and white photo, shot on Ilford. I have used VSCO's version of these film presets and they just don't do it justice. However, I think Mastin did a really good job at simulating the Ilford profile with their presets. Contrast will likely have to be adjusted to personal preference. The grain is pretty visible in the black and white film presets. I typically remove the grain before exporting, but have left it on (above) for viewing.

All of the preset packs come with the listed film presets as well as a few other editing tools. These tools include: hardening and softening of shadows and highlights, 35mm grain profiles, medium format grain profiles, and lens corrections on/off. It's a pretty simple and easy set up. Do not forget to select which camera manufacturer(s) you shoot with, so the presets stay accurate to the films the simulate.

Keep an eye out for a follow-up article in weeks to come where these film presets will go head-to-head against their real-film counterparts.

This article is not sponsored content. All words, opinions, and thoughts are that of the author.