Light painting is my favorite photography technique, but as I travel around the world meeting up with readers of Improve Photography, it's usually the thing that is toughest for new night photographers to get right.  In this article I want to share with you simple steps for creating a good light painting, and some pitfalls to avoid.

During this tutorial, I'll be showing images from a recent light painting I did in Ireland and the tips I used to make it work.

Step 1: Set up the camera

The first thing you'll need to do is get your camera on a good tripod.  Light painting without a tripod won't work because you need to keep the camera still.  Pick your composition and then lock down the ballhead so the camera won't move during the process.

Next, your camera settings.  As a very rough general rule, I'd set the shutter speed to 30 seconds (30″), the aperture to about f/5.6, and then select ISO 1600.  Obviously, those settings will depend on how bright the night is, how strong your flashlight is, etc.

I usually don't bother with a shutter release.  Just gently press the shutter button with your finger and then you'll run around shining the flashlight on the building (or whatever else you're light painting).  Go ahead and start the exposure now.

Really, any flashlight can work for light painting, but I do think that if you just invest $15 or so, you can have a much easier time.  I cannot recommend this headlamp on Amazon strongly enough.

I use that headlamp for all my light paintings for a few reasons: (1) it's a neutral white light, which is far more natural looking than an incandescent bulb which is much warmer, (2) it allows you to zoom the light in and out and choose a square shaped light or a circle light, which helps to get the light only where you want it to go, (3) it's just the right brightness, (4) it takes AA batteries which is nice because I always have extras in my bag for my flash, and (5) it's really cheap.

Again, it's not like switching flashlights will suddenly make your light paintings better, but it is nice to have a good one.

In order to make a really good light painting, you'll probably want to make several exposures and blend them together to make a single finished image.  This will require just a little Photoshop work, but it'll be worth it.

Here are the images you'll need to make.  Keep the camera settings and composition the exact same for all the pictures:

The reason we do multiple exposures is that it's hard when light painting to get each shot perfectly painted the first try, so by taking multiple pictures on different areas of the frame, you get more tries to get the painting perfect.

Don't worry about your histogram too much while shooting.  It's normal for 70% of the data to be dark.  Just make sure that the area you've light painted should be about 3/4 up the way to the top on the histogram.  If you aren't getting a lump of data toward the top of the histogram, you probably need to increase your ISO.  Remember that the photo on the back of the camera looks brighter than it really is, because your eyes are adjusted to the night.  Don't go too dark!

At this point, you probably have one normal frame, one frame with fill light everywhere, and between 3 and 10 frames from painting different areas of the scene. 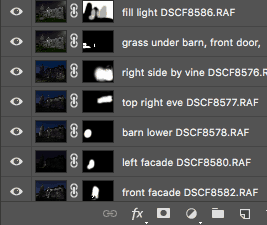 Step 4: Blend the photos in Photoshop

For some of you who are familiar with Photoshop, this step will be simple.  For others, this could be a bit difficult.  But don't fear, this doesn't require any advanced Photoshop trickery.

Here are the steps you'll need to know:

Your light painting is done at this point.  You can now bring it into Lightroom and do any global adjustments you want to do.

The First Key to a Good Light Painting–Angles!

You'll notice in the tutorial above and the video at the top of this post that I mentioned several times how important it is to light paint from different angles.

Keeping the flashlight low to the ground and sweeping across the ground will create moody, rich shadows.  If you just stand up high and blast down on the ground, you fill in the shadows and miss out on a great moody shadow.  The image above of the grass illustrates this point quite nicely.

The Second Key to a Good Light Painting–Softness of the light!

When you do flash photography, you generally wouldn't want to just shoot with bare flash.  Generally, you want to use a light modifier to spread out the light–thus making it softer.  The larger the light source, the softer the light is.  When I say softness, I don't mean that it's dimmer, but that it transitions from highlight to shadow with a gradual gradient.

If you haven't learned much about flash and light modifiers, PLEASE consider checking out my Lighting in a Flash video tutorial.  It's been getting REALLY REALLY positive reviews from people and it's the go-to place for learning about how light works and how to get started with flash.

Anyway, when you're doing light painting, you don't need any light modifiers.  Why? Because the exposure is so long that you can physically move the flashlight around and thus make the light come from a larger area.  Suppose you have a softbox which is 4′ x 4′ in size.  You take a picture using a thirty second exposure and pop the flash from the softbox.  The light will be soft because it comes from the large softbox.  Now suppose you take another picture using a flashlight.  You trace the shape of the 4′ x 4′ box by moving the flashlight during the 30 second exposure.  The result is that the light painted shot is just as soft as the softbox shot.

You'll see during the video above that I keep waving the flashlight around.  The more I swing my arm to light paint, the softer the light on that area becomes.  When I want the light to be harder, I don't move my arm as much.  For photographing the silo “barn” area on the photo, I walk around a bit so I can wrap the light along the curvature of the silo.

Hopefully this light painting tutorial has pointed you in the right direction for getting great shots next time you're out in the night and wanting to do something different or unique with your shot.

Light painting is really fun, but it can yield disastrous results in the photo if you don't understand the basic principles, so hopefully this will have helped.  Good luck!