Think of the Tone Curve panel in two ways: 1. A way to expand your control of the Highlights and Shadows (and therefore the Contrast) sliders in the Basic Panel, and 2. A way to control the color processing of your image. The second way is different than the HSL/Color Panel. The HSL/Color panel maintains the integrity of each hue, whereas the Tone Curve panel allows you to change how colors are represented in the photo.

When you first scroll to Tone Curve (or click it open if you follow the advice to right-click the panels and check “solo mode” so that only one panel is open at a time), you’ll see a square with a solid white diagonal line and a soft-gray graph that closely mirrors your histogram. The white line is the “tone curve.” That’ll be the line you adjust as you play with the tone curve.

Right below the tone curve graph you’ll see the tone “Channel” as well as the four choices: RGB, Red, Blue, and Green. Keep it set to RGB for now. I’ll talk about the four options in a little bit. 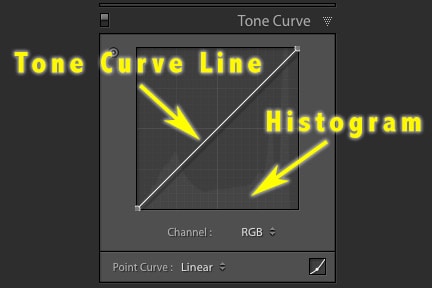 “That part of the photo” is where the Tone Curve panel might seem confusing at first. You have to consider the tone curve line, the dotted line representing neutral, and the soft-gray histogram all at once. Not to worry! Click the little box with a curved-line-and-dot in the bottom right corner of the Tone Curve panel. Region sliders will open for highlights, lights, darks, and shadows. When you hover your mouse over each slider, you’ll see a white oval that reveals the tones you are adjusting. 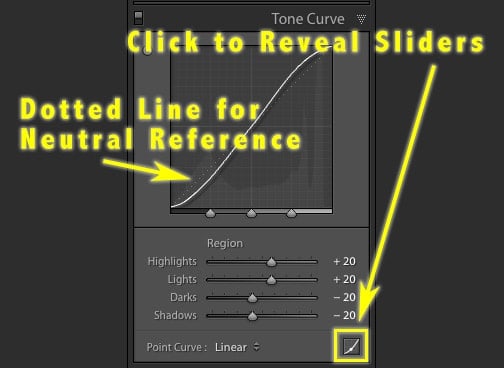 A typical adjustment for the tone curve is to make an “s-curve.” If you look at my screenshot, you’ll see a subtle curve in the white line that looks like an “s.” Notice the tone curve line is above the dotted line on the right side of the curve (in the highlights and lights) while the tone curve line is below the dotted line on the left (in the darks and shadows). That means I’ve made the lighter tones brighter and the darker tones darker, thus giving the image more contrast. 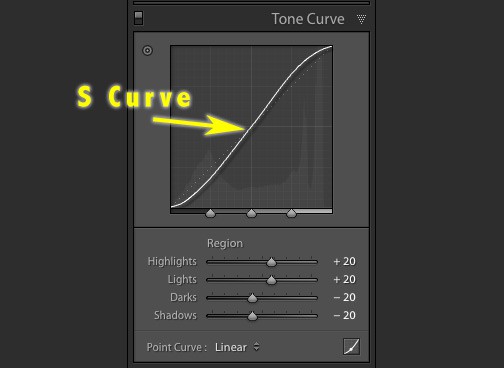 Lightroom also provides two tone curve presets in a drop-down menu. In the bottom left, you’ll see the phrase “Point Curve” followed by three drop-down choices: linear, medium, and strong. Linear is the standard tone curve that starts with the straight white line we saw at the beginning. Medium and strong give ever more exaggerated s-curves (or more contrast).

So far you know that the tone curve is represented by a white line that you can adjust to your liking. The soft-gray graph in the box represents the tonal data in your photo, and that data looks a lot like your histogram. You can click the little box with a curved-line-and-dot in the bottom right corner to reveal region sliders. The sliders are an easy way to adjust the tone and contrast of your image. You can also use a couple of presets (medium and strong) to add additional contrast to your image. All of our work so far has occurred in the RGB channel. Still with me?

Before we go further, here are two photographs I'll use to show you the effects of the Tone Curve panel.

First, a fruit still life. Here is the RAW file:

Here are my usual edits:

Here are additional edits made with the Tone Curve Panel:

Now, a self-portrait. Here is the RAW file:

Here are my usual edits:

Here are additional edits made with the Tone Curve Panel:

These two images and the various adjustments should give you an idea about how the Tone Curve panel can begin to add contrast and pop to your image. Using the sliders and the point curve presets are just the beginning of the Tone Curve's ability to manipulate your images.

Adding Points to the Tone Curve

You can take more creative control over the tone curve by adding points and adjusting to your liking. Simply click anywhere on the tone curve (the white line) and a little dot will appear. You can move that point up, down, left, and right depending on what you want to do to your photo.

Remember, when the soft-gray histogram is high, that means that tonal region has a lot of data. In my fruit example, a portion on the left reaches to the top of the tone curve box. That means there’s a large section of dark tones in my photo, which makes sense since a big chunk near the top is almost black.

One quick point: Lightroom helps us out a little by doing a complementary adjustment based on your point adjustments. When you adjust a point on the left, Lightroom will adjust the tone curve on the right to make sure things don't get too crazy. That's not to say that you can't make wild adjustments, but it'll take more than one or two points on the tone curve to outsmart Lightroom.

One typical reason to add a few points is to create the popular matte look that abounds in social media. A matte look simply gets rid of the darkest tones in your photo, graying out your shadows a bit. Take a look at my example and you’ll see the tone curve shape that creates a matte finish. You’ll see that the left-most part of the tone curve does not reach the bottom of the square. That means I’ve made the darkest tones lighter, thus getting rid of any true-black or near-black. That’s how you get the matte look.

If you're not sure where on the histogram or tone curve line you'd like to make an adjustment, but you know where in the image you'd like to change things, you can use the targeted adjustment to create a point on the tone curve. In the upper left corner of the panel you'll see the target (it's a circle with a dot in the middle). Click on it and drag it to the portion of the image you'd like to adjust. Click that portion of the image and a point will appear on your tone curve. Just be careful: chances are that the tone you selected is also in other places in your image. Using the point you created with the targeted adjustment means you'll probably adjust other parts of your image, too.

Just to test your knowledge, how would you change the tone curve to make your image entirely neutral gray? Think for a second. What part of the curve do you need to make lighter and what part do you need to make darker? If you thought that turning the tone curve from a diagonal line to a horizontal line directly in the middle of the graph would turn everything gray, you'd be correct. Check out my self-portrait turned totally gray (you know it's my self-portrait by looking at the soft-gray histogram):

Every pixel in your image is some combination of the colors red, green, and blue. That’s just how it all works. With the RGB Channel, you’re working with all three colors at once, which allows you to adjust the tone of the entire image at once without changing the colors in a drastic way. The RGB Channel is how you adjust the contrast of the image, either with sliders, preset point curves, or adding and adjusting your own custom points.

Those three color combinations should become etched in your memory. Primary RED and secondary CYAN. Primary GREEN and secondary MAGENTA. Primary BLUE and secondary YELLOW. Memorize those three pairs. Using the color channels in the tone curve panel will just be easier if you don't have to think too hard about those color pairs.

When you select a color channel, how do you know which color you’re working with, primary or secondary? And how do your adjustments affect the image? You’ll again be using that dotted-line as a reference for your color. As you add points and adjust the tone curve, any part of the curve that goes above the dotted line adds the primary color (red, green, or blue) to that tonal region. Any part of the curve that goes below the dotted line adds the secondary color (cyan, magenta, or yellow).

Take a look at my examples and read the captions if my written explanation is beginning to get confusing. Each example adjusts only one color channel and leaves the other two alone.

Now it’s time to play with all three color channels at once. Why? To emulate a technique called “Cross-Processing.” We need to pause for a little history if you’re only familiar with the digital world of photography.

With film photography, you had two types of color film: color negative film (what most of us think of when we think of film) and color slide film (yes, those slides your grandparents might pull out and show with a projector). Each type of film required a different chemical for development. Cross-processing is the technique of using the opposite chemical to develop the film. In other words, you’d use color slide chemicals to develop color negative film. Why do this? For unpredictable and outrageously fun color tones.

For a typical client, you’re not going to deliver something that looks like a cross-processed image. But for personal projects, advertisements, album covers, and social media, go wild, right?

That’s about all you need to know in order to learn to manipulate the Tone Curve panel. With practice and time, you won’t think twice about using the Tone Curve panel to your advantage. The Tone Curve is a great panel to use to get creative and unique with your images. Don't let me examples limit you. Add some points, move them up, down, left, and right, and see what happens.

If you’d like to see an example of adjustments made in the Tone Curve panel to the same image, I have created two additional pages of example images.

Here is a progression of the fruit still life.

Here is a progression of the self-portrait.

This website has some awesome info and examples for cross-processing, too.

8 thoughts on “How to Use the Lightroom Tone Curve Panel”