Check out 21 of the most epic selfies on Instagram!

Young and old, celebrity and non-celebrity, everyone is snapping photos of themselves with their cell phones and sharing them via social media. Even the Pope and President Obama have taken selfies.

Right now on Instagram, there are over 294 million photos tagged #selfie and others that are clearly selfies, but are not tagged.

It’s safe to say that selfies are all the rage.

What is a selfie? For the purposes of this article, a selfie is a photo of someone (sometimes by themselves, other times with additional people) taken by that person with a cell phone.

In this article, I want to focus on not just selfies, but epic selfies.

At dictionary.search.yahoo.com, the definition of epic (used as an adjective) is: “Surpassing the usual or ordinary, particularly in scope or size; heroic and impressive in quality.”

As I was scrolling through Instagram looking for epic selfies (right now, there are over 25,000 selfies tagged #epicselfie), I clicked on images that caught my eye.

Some of the #epicselfies on the list that follows made me laugh, a few made me cringe, and others had me thinking, Wow! or That’s crazy!

Now, here are 21 of the most epic selfies on Instagram: 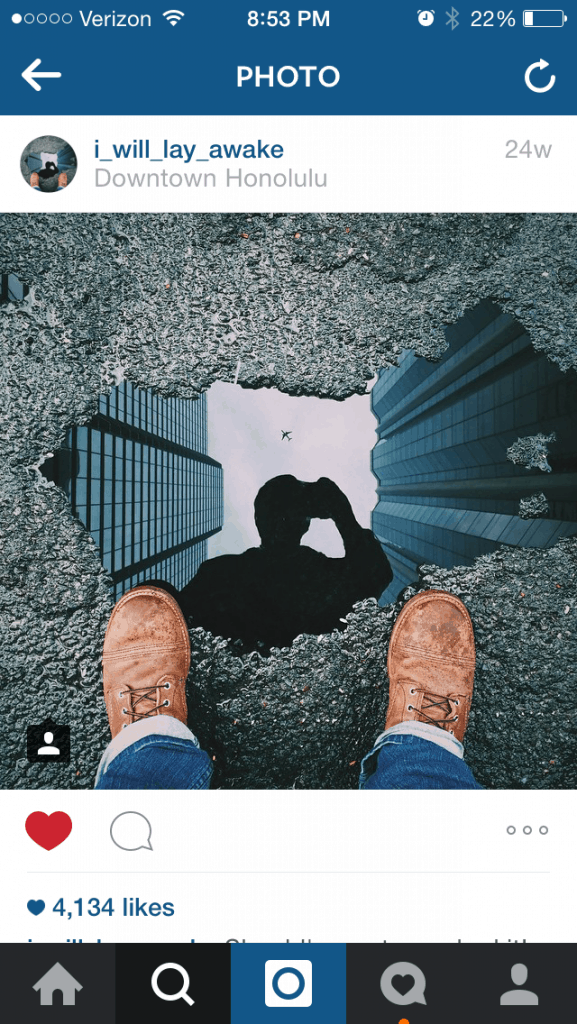 #1: This epic selfie by @i_will_lay_awake is at the top of the list because when I saw it, I thought, Wow, that’s impressive! I’ve long been drawn to images with reflections, but this one not only captures the reflection of the photographer, but also the buildings around him and an airplane overhead. And if that wasn’t awesome enough, this photo was shot—not in a pond or a lake—but in a puddle–in downtown Honolulu, no less. 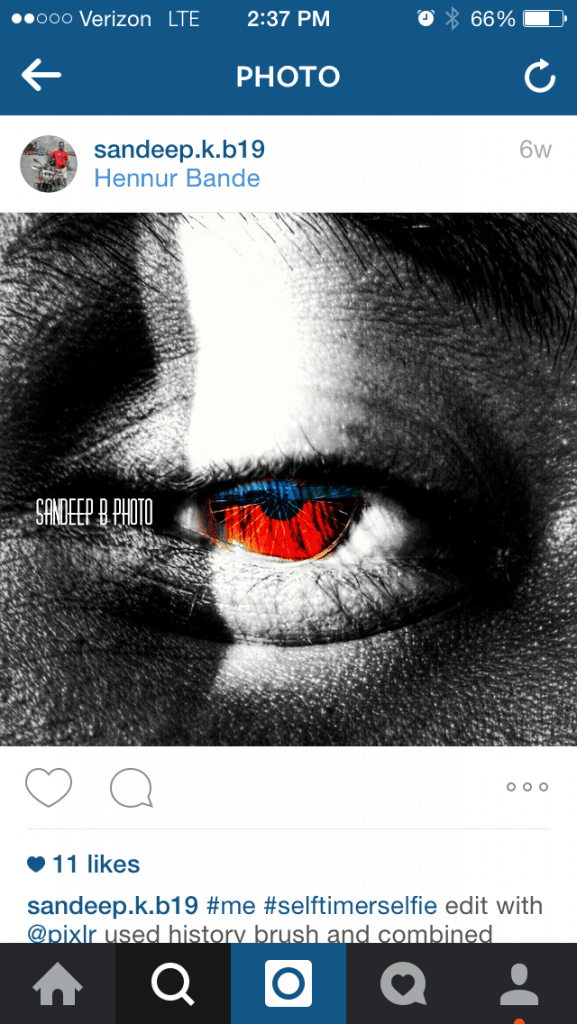 #2: Here’s another epic selfie—this time of an eye. This close-up shot was taken by @Sandeep.k.b19 using a self timer. From there, he edited the image with the app, Pixlr. In @pixlr, he “used the history brush and combined double exposure with the image of a wheel.”

Taking a selfie with your BFF is one thing; taking a photo with a wild animal is quite another. In these epic selfies, women and men pose with exotic animals at zoos and while on safari. 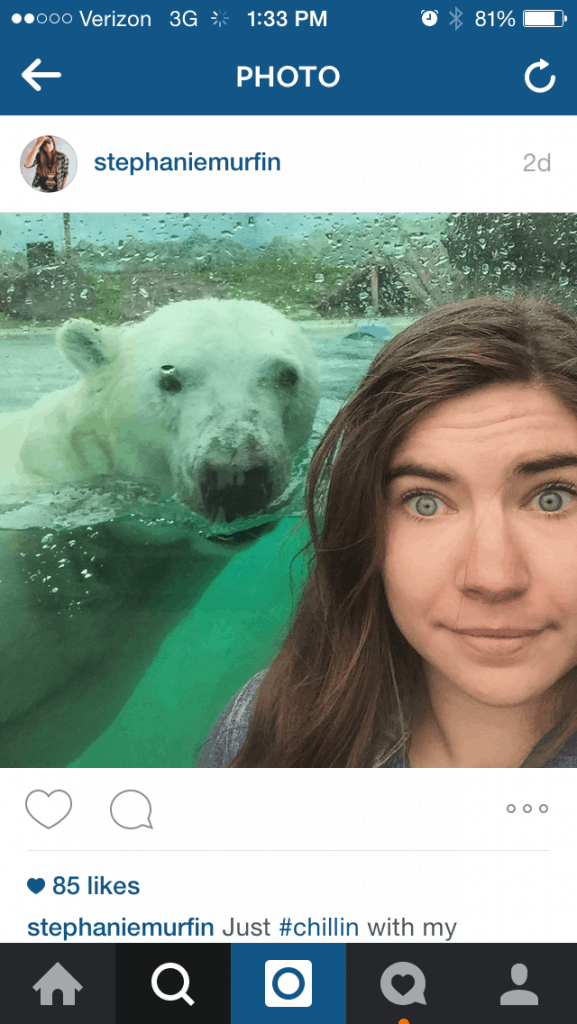 #3: A selfie with a polar bear? Definitely epic. (This selfie was taken by @stephaniemurfin.) 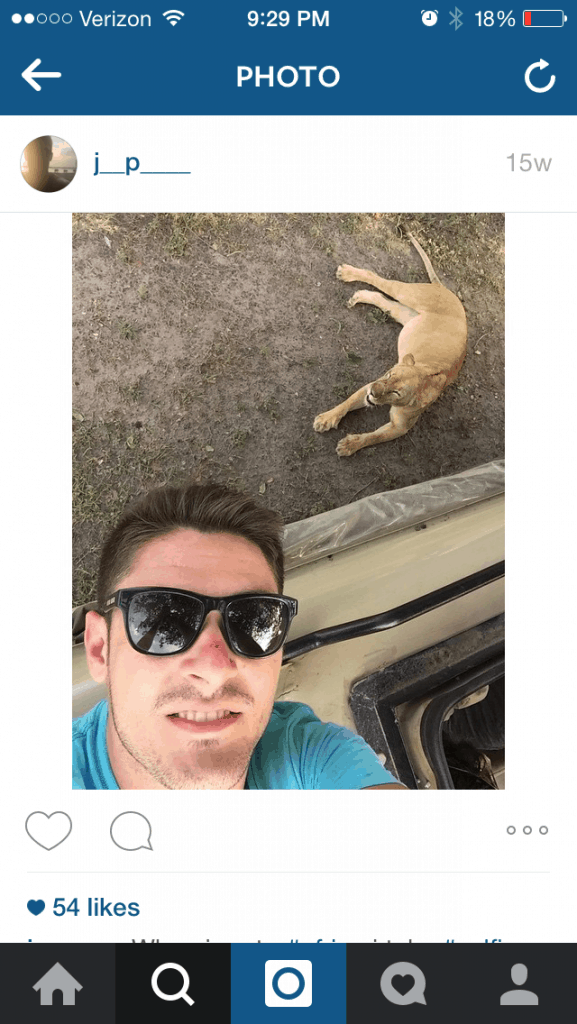 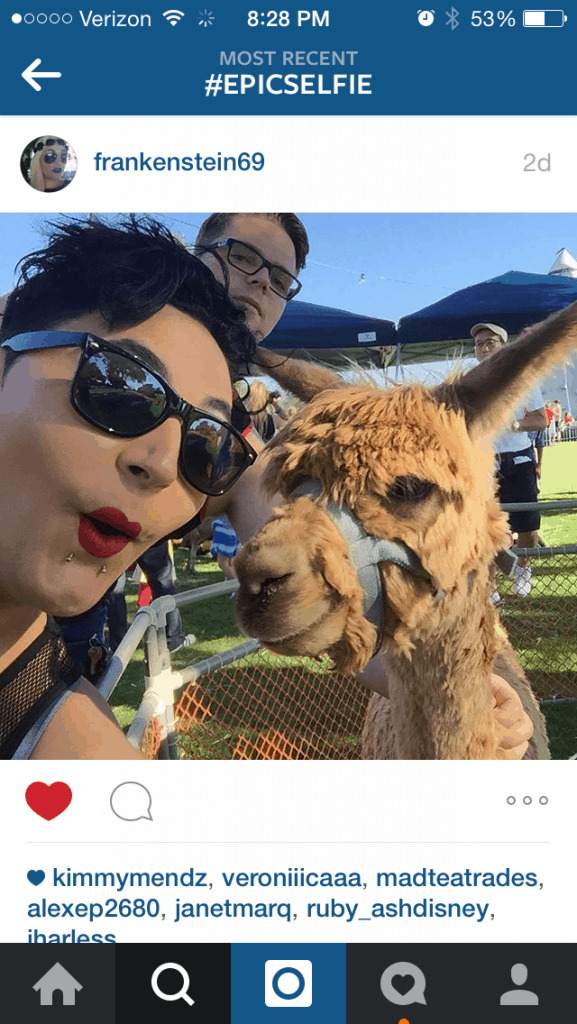 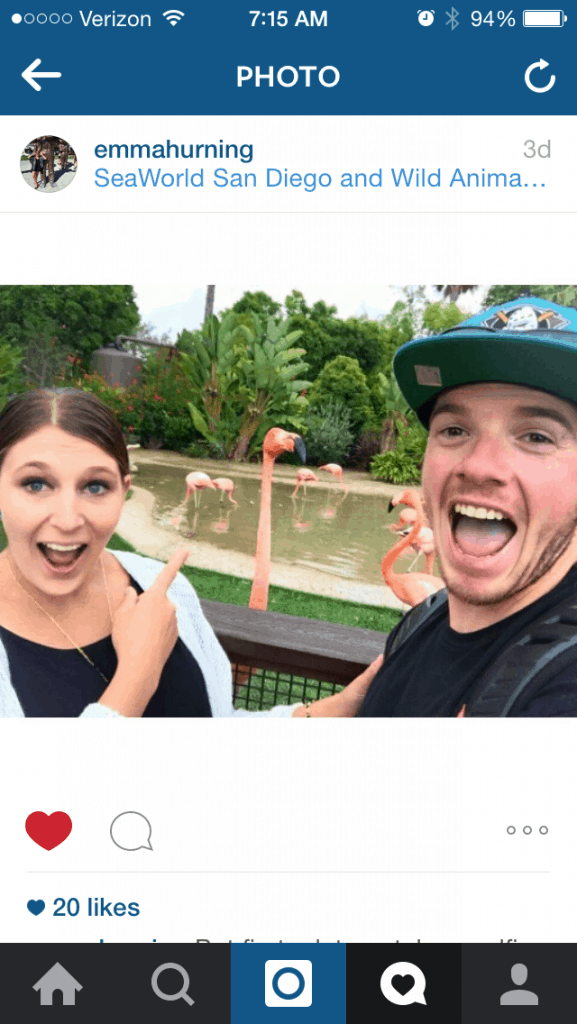 #6: Or a flamingo? Photo by @emmahurning.

NOTE: Please make safety a priority over all else when taking pictures with animals.  There was recently a person gored by a Buffalo in Yellowstone while attempting to take a selfie.  Remember that animals in the wild are still wild and your safety is far more important than getting an epic selfie.

It’s always exciting to snap a selfie with a celebrity– whether he or she is a singer, a comedian, or one of the Founding Fathers of our country. 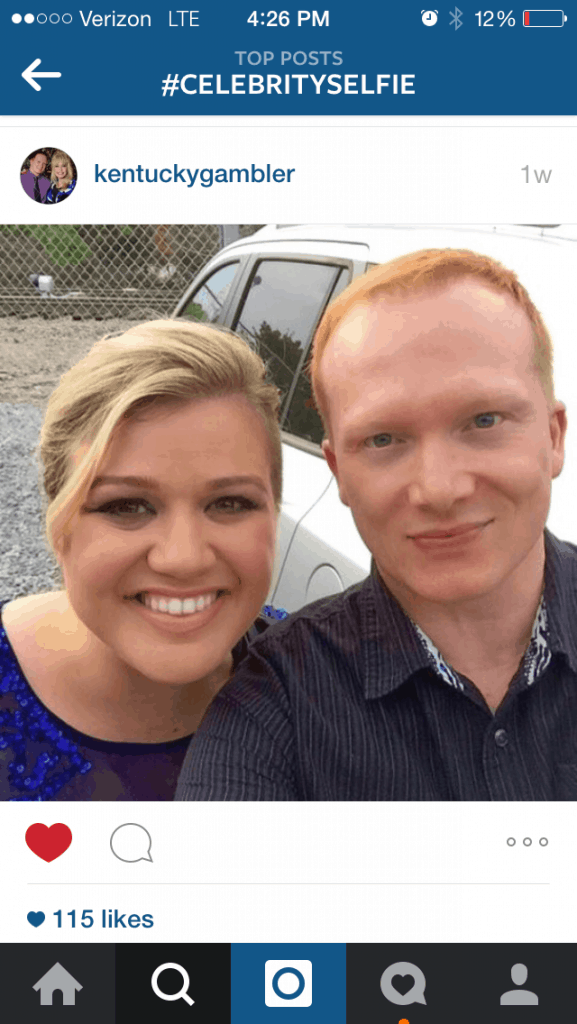 #7: In this epic selfie, @kentuckygambler snaps a photo with singer Kelly Clarkson. 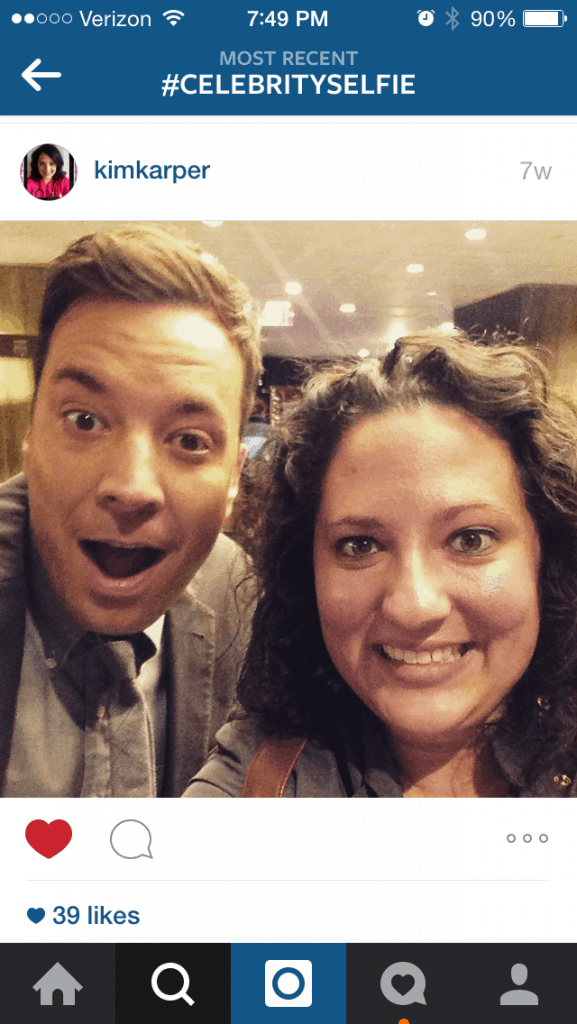 #8: In this photo, @kimkarper takes an epic selfie with comedian Jimmy Fallon. 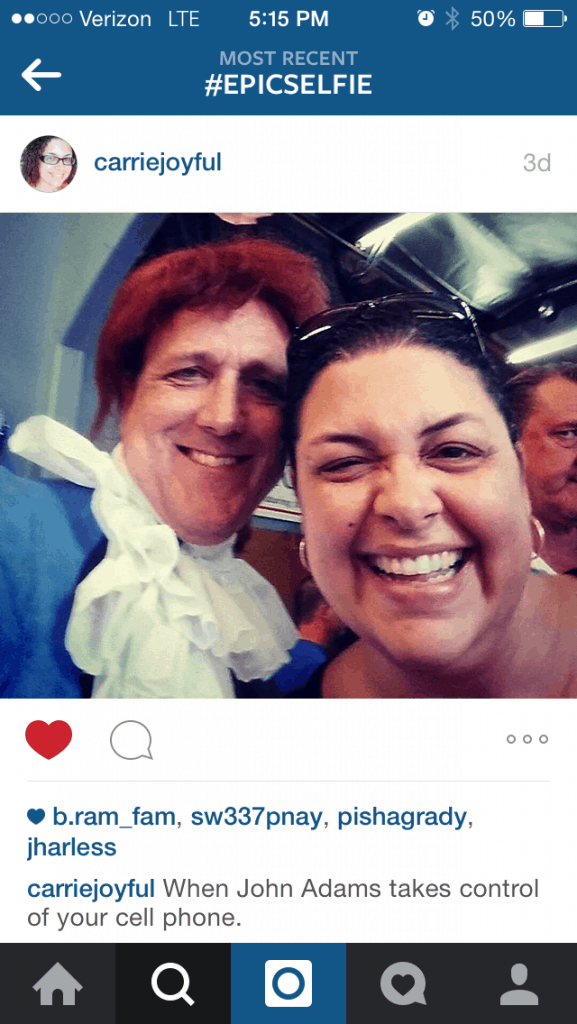 #9: In this epic selfie, @carriejoyful poses with John Adams at the International Printing Museum. 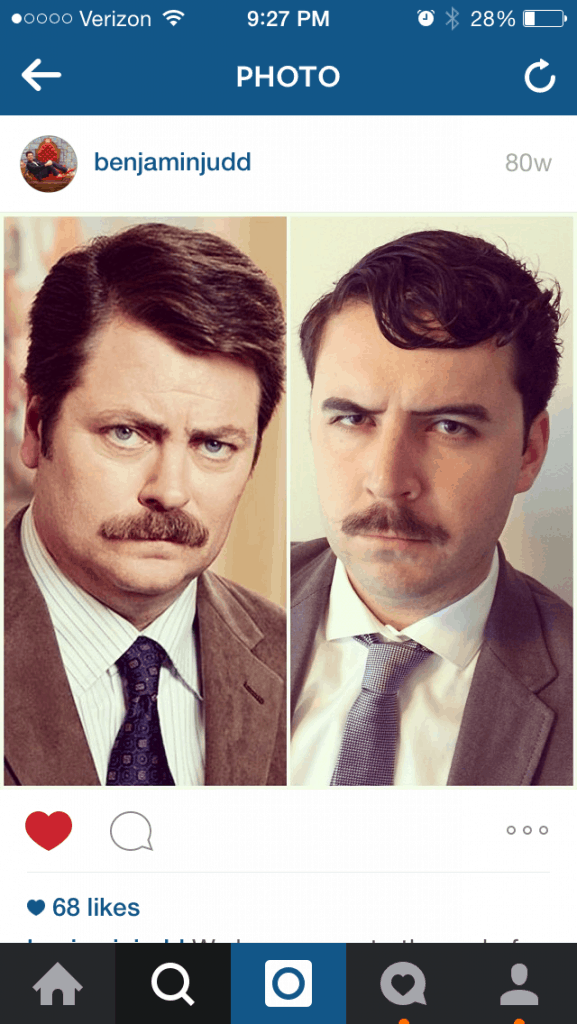 #10: In November (often referred to as Movember) 2013, @benjaminjudd documented the growth of his mustache by creating a month-long series of celebrity-inspired selfies. In this epic selfie, Judd resembles Ron Swanson, a fictional character from the NBC television series, Parks and Recreation.

Sometimes what makes a selfie epic is the location in which the photo is taken. That’s the case with these three Instagram photos. 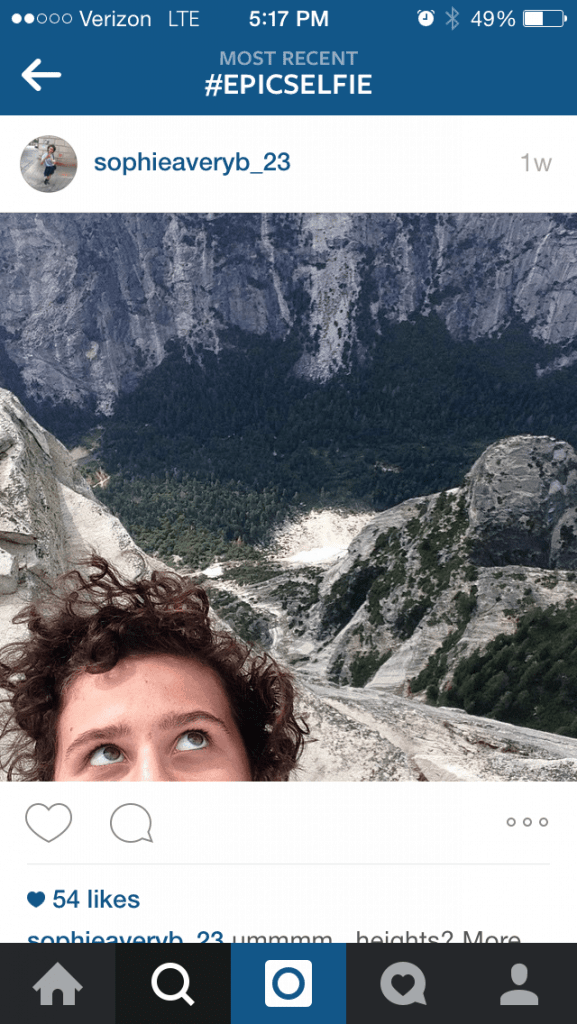 #11: In this epic selfie, Sophieaveryb_23 snapped a photo of herself at the top of Half Dome, after a 16.5 mile hike that took 15.5 hours. An epic climb, an epic selfie, and an epic view. 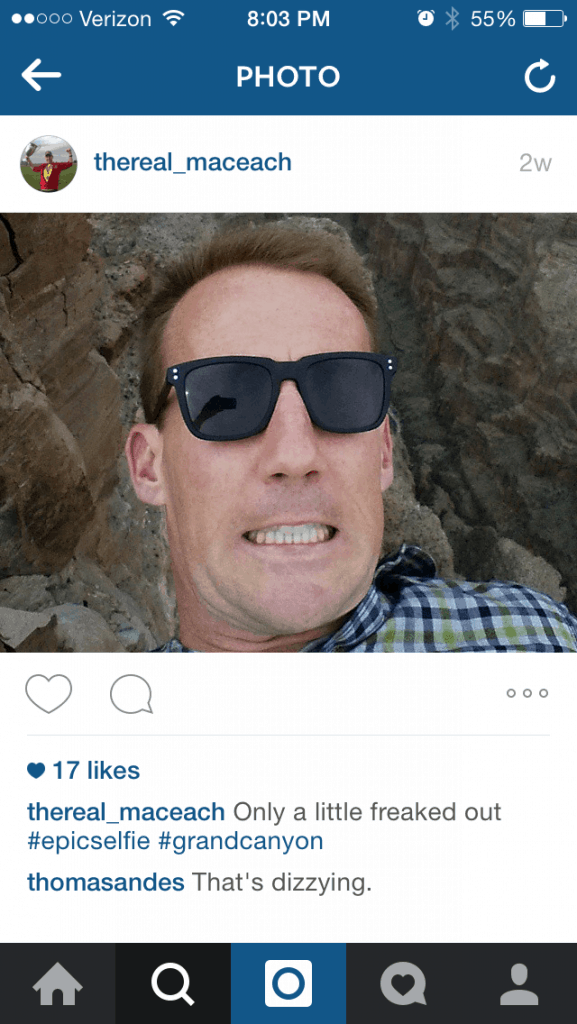 #12: In this epic selfie, @thereal_maceach takes a photo of himself while leaning out over the Grand Canyon. 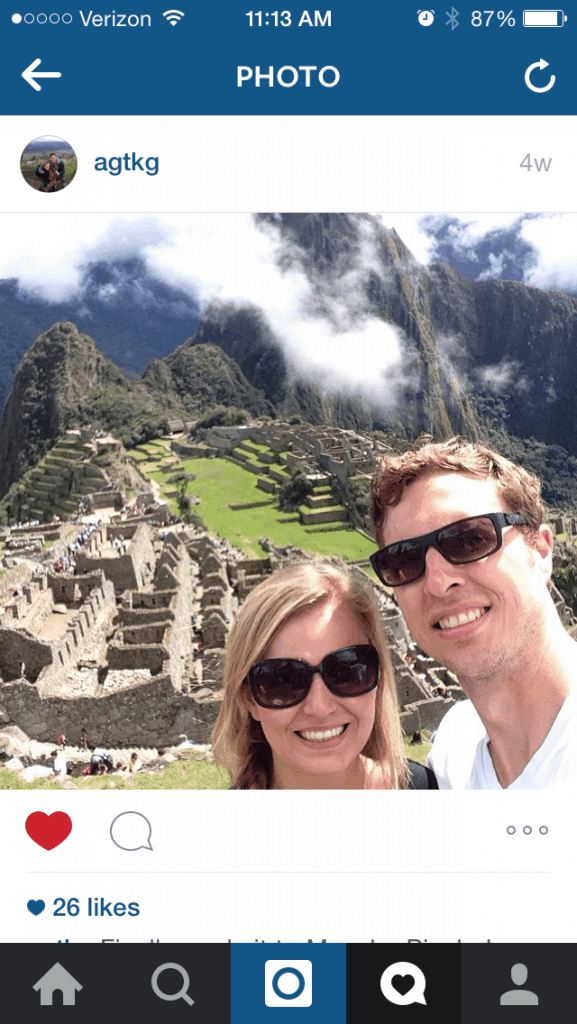 #13: @agtkg captured this epic selfie in Machu Picchu, an iconic ancient city built high atop a mountain in Peru. 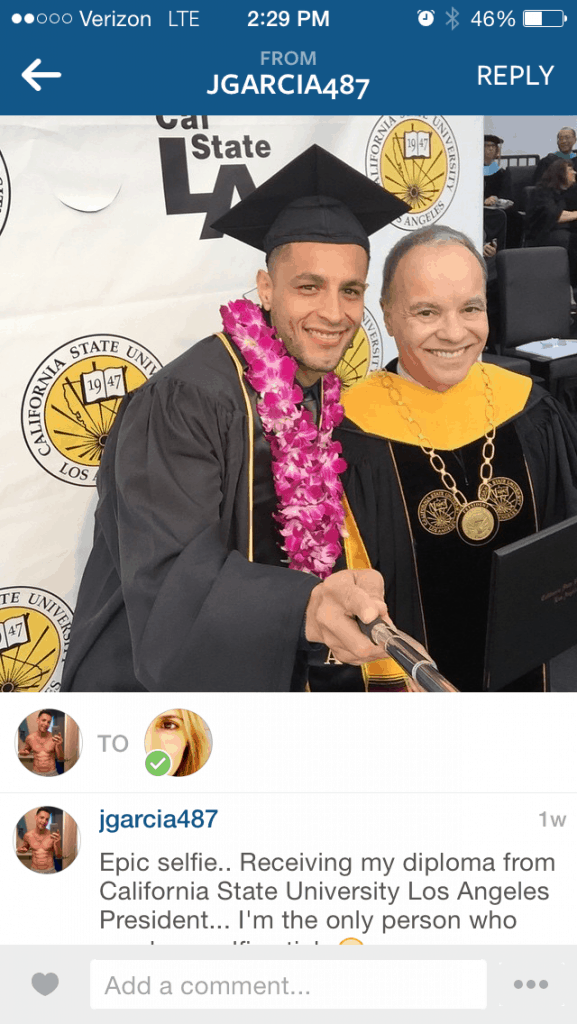 #14: @jgarcia487 took this epic selfie (with a selfie stick) during his college graduation ceremony. 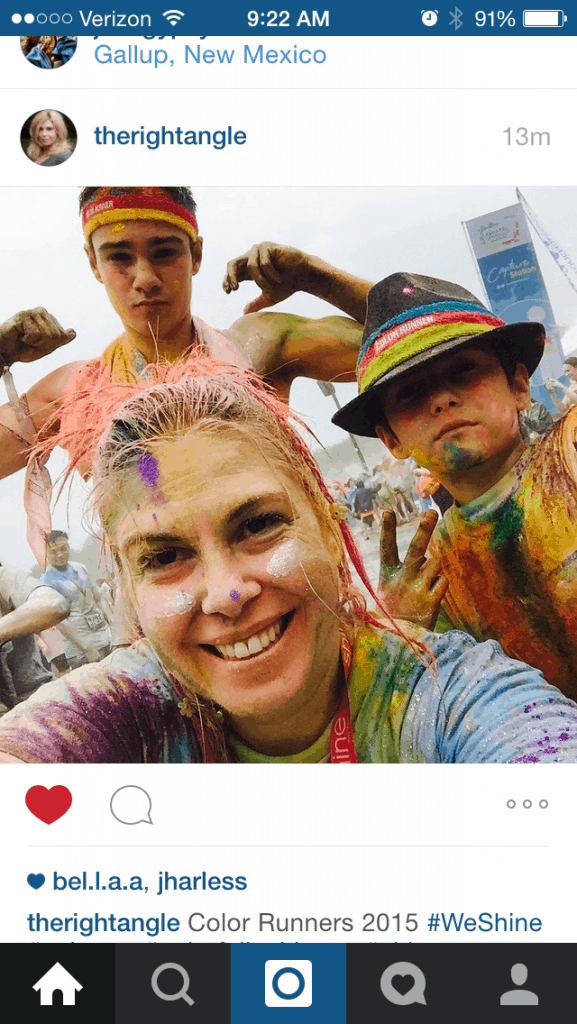 #15: This epic selfie, taken by @therightangle, grabbed my attention because everyone in the photo is covered with color from head to toe.

These selfies are epic, simply because they are funny and creative. 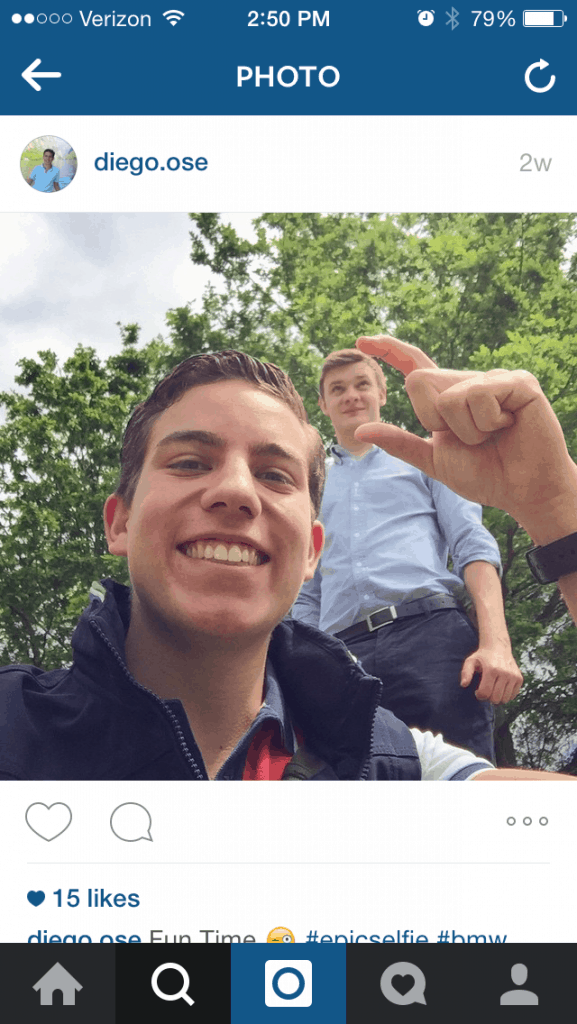 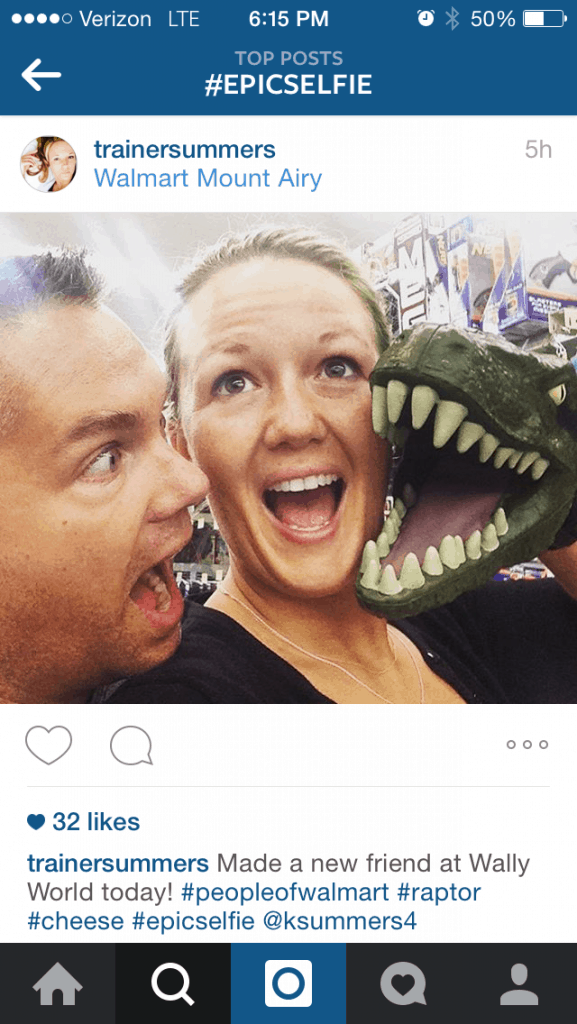 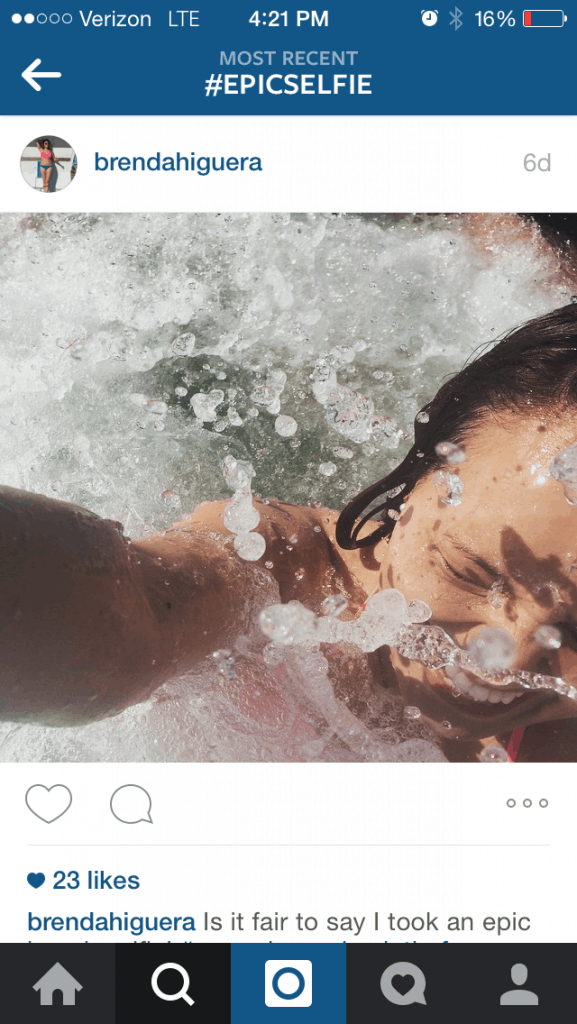 #18: In this epic selfie, @brendahiguera snaps the photo just as she is hit in the face with a huge wave. 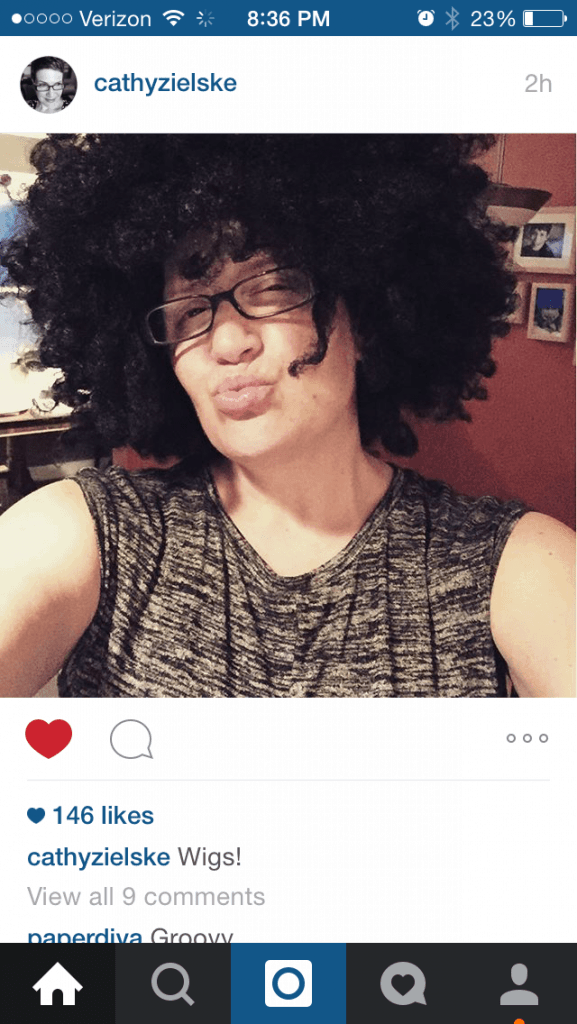 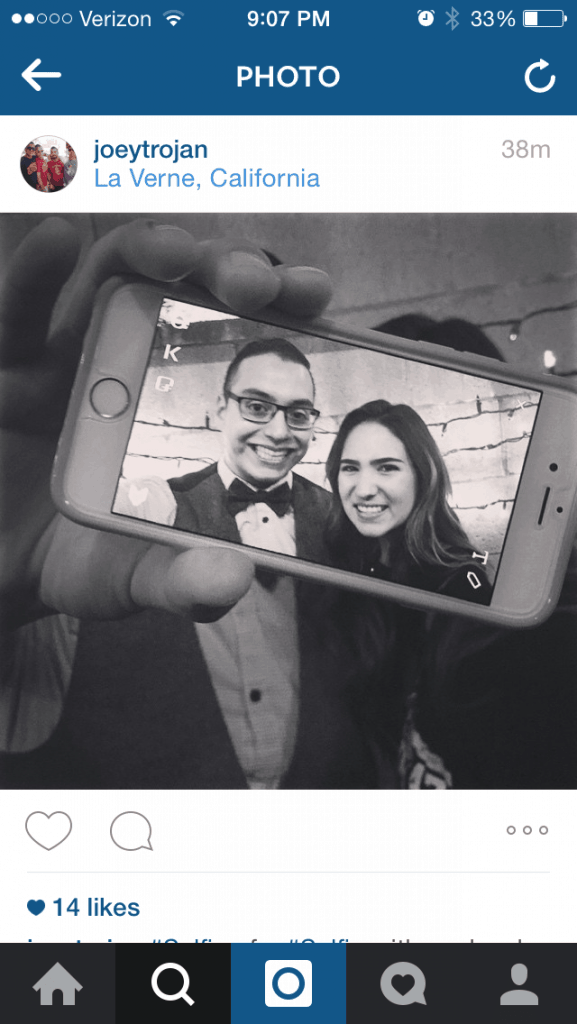 #20: As you can see, this black-and-white photo is a picture of an already snapped selfie. The first shot was taken by @joeytrojan, who is pictured on the screen of the cell phone, and whose hand is visible on the left side of the image. The final image (the shot pictured above) was taken by a family member who is not pictured. 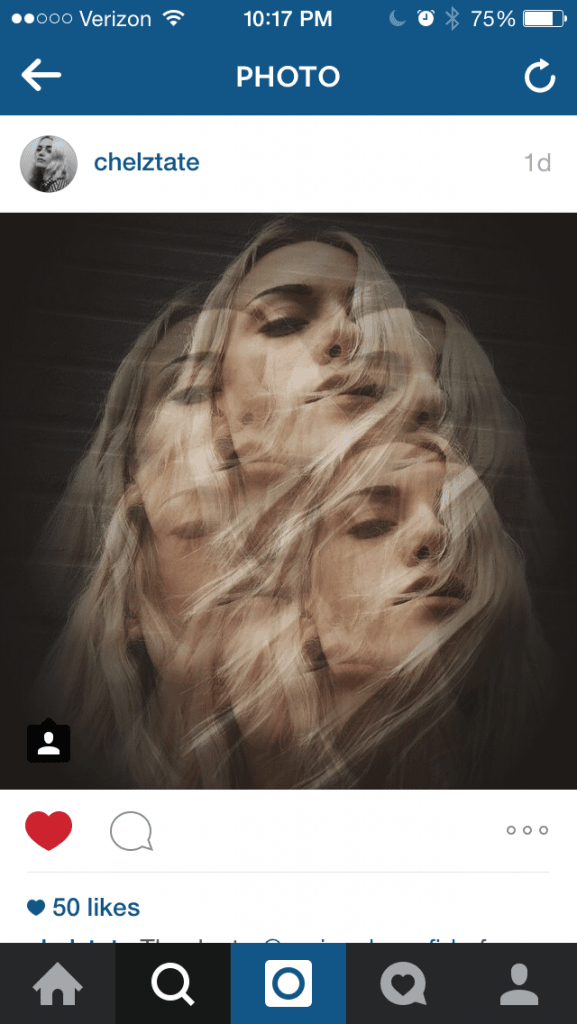 #21: @chelztate snapped a selfie with her iPhone, and then used the @futureeyes application to create this 5-in-1 epic selfie.

When you’re taking a photo of yourself, remember that you don’t have to physically hold your cell phone for it to be considered a selfie. You can always prop your phone up on a table or countertop and use the self-timer or try out one or more of these gadgets instead.

Jennie Harless is a hobbyist photographer who loves capturing life through her lens. Her favorite subject is her 3-year-old son whom she and her husband adopted at birth. Jennie and her family make their home in Northern California, but love to travel to places all over the United States. Her photography and writing can be found at The Life and Times of Jennie Rose and Jennie’s Journey.