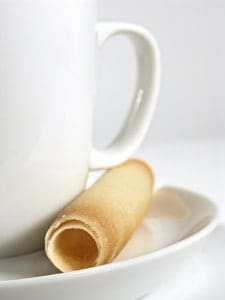 We've all heard the old maxim “Don't bite off more than you can chew.”  It is solid sage wisdom and deserves every photographer's attention.  When photographers discuss composition and framing, we usually think of the rule of thirds, leading lines, framing, and the golden mean; however, it can be helpful to apply the age-old wisdom of not biting off more than you can chew.

Sometimes, despite our best efforts, our photos just don't look quite right.  Sometimes we can identify the problem, but sometimes we don't know what's wrong other than the fact that the photo just simply doesn't have the impact that we hoped it would.  Every time this situation arises, remember the rule of biting off too much.  The answer to this problem is to extract a smaller picture from within the large scene.

If you're shooting a beach landscape, just shoot the wave in front of you as it hits the sand; if you're shooting an HDR of a run-down building then consider just focusing on one little piece of the wood or metal in the building; if you're shooting a portrait, then crop in tight on the eye or cut off part of the face.  No matter what you shoot, there will always be a way to crop in tight on a small part of the scene.  This, my friends, is the bite-sized rule of composition.  If you bite off the whole scene and it doesn't look quite right, then consider cropping in tight on one piece of the scene for a more solid composition.

Until now, we have only used examples of this compositional rule in terms of landscape photography, but the truth is that this rule is best suited to portrait photography.

Full-body portraits are extremely tough to pull off.  In fact, I rarely attempt to photograph full-body standing shots of my clients.  I generally reserve that to when I'm shooting models, who can pull off the full figure shots.  You may have noticed this in your own shooting.  You'll usually be happier with the cropped-in versions of portraits.  When the subject is sitting down or indian-style on the ground, this problem may not be so bad, but when someone is just standing up, it will be tough to make the photo not look snapshotty (yes, I just used a double-negative and “snapshotty” in the same sentence, but this is a free article).

So where can you crop in on a person?  Yes, you're right.  You can certainly focus just on the face or the eyes, but is that the only creative idea you have?  Consider the hands, which can often tell so much about a person if they have some character in them.  You could also just focus on someone's feet when they are wearing an interesting shoe or if they are standing somewhere interesting.

1 thought on “Bite-sized composition in photography”