Learn how to take great photos of water drops without any special equipment other than your DSLR in this guest post by Jeff Cable (follow him on Facebook for lots of photography tips).  Jeff was kind enough to offer to step in and send this guest post while I am trying to put things back together after moving my family from Southwest Florida to Boise, Idaho this last week.  Enjoy the post!

Photographers should always get out of their comfort zone and try new things. With that in mind, I set out to try something new by shooting drops of water falling into a bowl of water. After seeing a very cool image of a water drop that was posted by another photographer, I thought that I should give this a try.

The end results are really cool, but it took hundreds of shotsand trial and error before I finally got some keepers. I took almost a thousand images with my Canon 5D Mark II in burst mode, hoping to get the water droplets with perfect beads of water that are frozen in time.

In many of the images, I had either no drops of water or nothing of interest in the frame. In others, I had the drops of water but they were not properly lit or the photos were not in sharp focus. 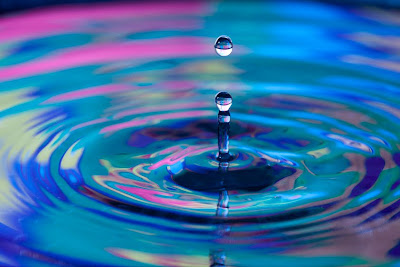 Many photographers wonder how to get great color in the water when shooting photos of water drops.  To achieve this effect, I simply pointed the camera at the bowl of water, but put different pieces of colorful wrapping paper in the background while pointing the flash at the wrapping paper.  Not only does this add great color, but it minimizes the reflections on the water. 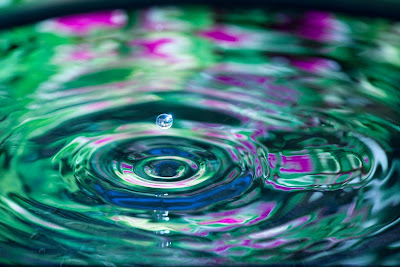 In the shot above, I simply put a house plant behind the water before taking the picture. The colors that you seen in the water are simply reflections of the flowers and leaves from the plant.  Simple! 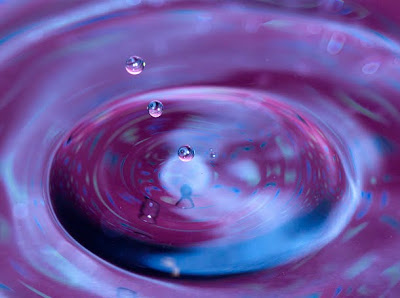 I found that the best way to get consistent water drops in the same spot was to fill a plastic baggie with water a few feet above the bowl and then simply poke a small hole in the bag so it dropped one little drop at a time into the bowl.  Sometimes I would catch one drop of water coming down and other times I caught more than one drop in the picture. 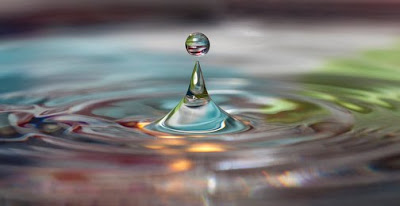 I was amazed how beautiful water drops really are. I especially liked the shapes and patterns that I captured with the camera.  You really don't need a very fast shutter speed to freeze the water drop's movement if you use a flash.  I shot these photos at 1/200th of a second shutter speed and simply used the quick burst of light from the flash to freeze the movement. 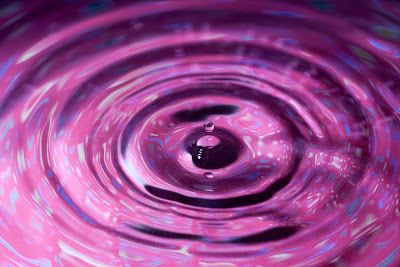 You will notice that I changed the angle of my camera to get different looks. In the extreme close-up shot (2 above) I was shooting almost directly across the water. In this last image, I shot from a higher angle and shot down at the bowl of water. In this picture, the ripples were caused by a drop which had hit right before, and then this drop was just about to impact the same spot.

As I look back at all these images, it is hard to believe that I was using clear water. It looks like I used color additives or Adobe Photoshop, but a reflection is all that was needed.

Note: You can see more photography from Jeff Cable on his website: JeffCable.com.  Jeff Cable is a photographer extraordinair and Director of Marketing at Lexar.

11 thoughts on “How to Take Pictures of Water Drops”