Photography is about capturing that perfect moment and the single image that says more than a thousand words ever could.

History, wonder, beauty, and the rarified junctures that tell the human story in a way that no other art form ever could.

Photography has caught them all and charted the course of mankind’s endeavors, passions, mistakes, triumphs, and failures for more than one hundred and fifty years and will inevitably continue to do so for the next century and a half at least.

And just like the subjects it has recorded, photography has evolved with the passage of time, and since its inception has changed almost beyond all recognition.

But the more things change, the more they stay the same, and even though photography may have moved on in leaps and bounds, the equipment that photographers rely on has, for the most part, stayed the same.

Photographers need a camera, film, or a digital device to store their images on, and for those elusive, difficult to capture shots that are reliant on patience and playing the long waiting game, a tripod.

If you’re enamored by, and pursuing those arduous, but incredibly rewarding shots but haven’t had the opportunity to find the right tripod, we’ve got some good news for you.

We’ve done the hard work for you, we’ve found five of the best tripods that’ll help you to take those pictures, and the even better news is, they’re all under one hundred dollars.

Are you ready to find the right tripod for those perfect shots?

You are? Good, then let’s begin…

Lino Manfrotto knew what it meant to be a working photographer. At the tail end of the nineteen sixties, he was a photo reporter with ties to the worlds of industrial and advertising photography and he was tired of being hampered by the cumbersome equipment that he needed to do his job properly.

So he founded Manfrotto to design and manufacture the sort of photography hardware that he knew would make all photographer’s lives easier and their chosen profession and hobby far more enjoyable.

And that’s exactly what Manfrotto has been doing ever since and why the first tripod on our list is a Manfrotto one.

This pistol grip operated tripod has a head that will swivel through three hundred and sixty degrees to help you get those perfect panoramic shots and will also tilt through ninety degrees in every direction so that nothing will escape your eye.

Made from solid aluminum, it’s durable and hard-wearing and when folded measures just seventeen and a half inches, but will extend to an impressive sixty-one inches.

Light and portable, it was designed with DSLR (digital single-lens reflex) camera’s in mind, so it’s ideal for amateur photographers and those new to the world of photography, but can also maintain it’s incredible balance if you want to use a slightly larger lens.

Lino knew what photographers needed, and his company has been delivering the right equipment for the right job since day one. 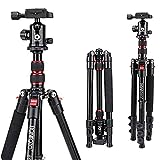 Bonfoto isn’t exactly a name on every photographer’s lips, in fact, if you asked most photographers, they’d probably tell you that they hadn’t even heard of them. And to be honest, until we put this tripod through its paces, we didn’t know who they were either.

We still don’t, but that doesn’t matter as this tripod told us everything that we’d ever need to know, and everything that it had to say turned us into committed Bonfoto believers.

Its ball head mount will swivel through a full three hundred and sixty degrees and its central column can be inverted so that you can chase those macro shots that other tripods won’t let you get.

It’ll fold down to fourteen and a half inches and extend to fifty-three, and as it only weighs two and a half pounds, you can just throw it in your backpack and go. The Bonfoto won’t hold you up or slow you down.

However, the best thing about the B690A is the weight that it can support.  With an upper weight limit of seventeen and a half pounds, whatever camera you mount on it, the Bonfoto won’t buckle, bend, tip over or collapse and will happily hold your rig steady while you snap away all day.

You may not have heard of Bonfoto, but after you’ve spent a couple of days using the B690A, you’ll never forget them.

Is there anything that Amazon doesn’t do? Of all the tripods we thought that would make our list, the last one we ever expected to end up singling out was one made by, or rather for, Amazon.

Yet, here we are, beholden to a Jeff Bezos manufactured tripod that’s incredibly good at doing what it was made to do.

The Basics tripod has an adjustable three-way head with a surprising amount of tilt and swivel action that makes it ideal for portrait and landscape photography, and its aluminum construction means that it’s strong, durable and light.

Weighing in at just under a pound, you’ll barely know that you’re carrying it in the surprisingly shoulder-friendly bag that it comes with.

It’s quick release plate also gives you the freedom you need to bounce between shots and shooting styles, and doesn’t keep you rooted to the spot. And it’s rock-solid stability makes it perfect for filming video as well as taking still shots.

Is there nothing that Amazon can’t, and doesn’t, do? 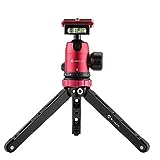 When you start talking about photography, it’s easy to forget that it’s isn’t all about long shots, expressive vistas, and achingly beautiful landscapes. Sometimes you just want to capture those up-close moments, and that’s where this tabletop tripod comes in.

That and the fact that it’s also ideal for product shots for bloggers and website builders and an ideal way to film yourself and begin a second career as a YouTuber.

It may be small, extending to a maximum height of around four and a half inches, but it’s as it’s made from aluminum, it’s tougher than the ninety seventy-five Philadelphia Flyers starting line-up and can easily cope with loads of up to one hundred and sixty pounds.

With a full tilt and swivel head, there isn’t an angle that you won’t look good from if you’re shooting with the Moman Tabletop.

It’ll also stay locked in place and steady wherever you set it up and thanks to its rubber-clad feet, it won’t slip or slide. Life isn’t just about the big picture, sometimes it’s the small things, like the Moman Tabletop, that really matter. 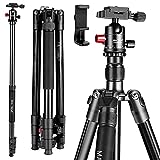 No, you’re not alone, Mactrem is another of those companies that we hadn’t heard of either. But we’re not so set in our ways that we’ll let a little thing like not having heard of someone get in the way of testing a tripod.

And we’re glad that we didn’t, as this tripod is one of the best that we’ve spent any time with.

And, as it happens Mactrem is a Chinese company that specializes in making high-end camera equipment at a price point that everybody can easily afford.

Ideal for use with either your camera or smartphone, the Mactrem collapses to just under eighteen inches long and extends to a maximum height of sixty-two inches. It weighs just two and a half pounds and can mount anything up to thirty-three pounds.

And the central column? It’s fully reversible so you get all the macro shots that you want using the Mactrem.

Best of all though, even better than it’s all-aluminum construction that makes it durable and dependable, is the fact that it has two bubble levels on its head.

If you’re looking for the sort of stability that will guarantee your photos will always be straight and level, then look no further. When a tripod is this good, who cares if you’ve never heard of the company who makes it.

The degree of freedom that the head of a tripod will give you is something that you’re going to want to look carefully at.

The further the head unit will move on both axis, the better the photographs you’ll be able to get using it will be. Tilt and swivel are important, so it’s important to make sure that your tripod can, and will, do both.

If you’re tall, you’re going to want a tripod that’ll match your height.

If you’re tipping the scales at six foot plus, a four foot something tripod just won’t cut it unless you want a future filled with potential back issues and knee problems.

If you’re going to carry a tripod around day in and day out, it’s weight and the height (or if you prefer length) that it will fold down to are incredibly important.

The less it weighs and the smaller it becomes when folded, the easier it will be to carry and the easier your life will be. It’s a simple equation that’s designed to simplify your life. Remember it when you’re choosing your tripod.

Something else that’s worth bearing in mind is how much weight the tripod can handle. If you’ve got heavy, cumbersome gear, you’re going to need a tripod that can take the strain and do what it’s supposed to.

Before you buy a tripod, find out how much your camera weighs, and choose a tripod that can cope with that weight. The weight limits are there for a reason, if you ignore them, you do so at your own peril.

What Is A Camera Tripod?

A camera tripod is a mechanical device that is used to mount, stabilize, and elevate a camera and other photographic equipment. It always has three legs, which are extended to the same height to guarantee the camera’s stability.

A tripod uses a head unit with a screw attachment that a camera is fitted to keep it stable and locked in place in the tripod.

They are used for both still photography and for filming as they keep a camera fixed in place which helps to maximize and improve the quality of the film and photographs.

Which Camera Tripod Under One Hundred Dollars Is The Right One For Me?

That depends entirely on what you want it for and your budget. If you want to film videos for YouTube or take product and close up photographs for use on the internet, then the tabletop tripod from Moman is an ideal choice.

However, if you’re more of a traditional photographer or looking to enter the world of conventional photography, then you’re going to need a regular tripod, in which case we’d always recommend the Mactrem.

Affordable, weight, and height friendly and equipped with more kit than a Marine, it’s an ideal entry, or professional, level tripod.

At the end of the day though, the choice is yours. Happy snapping!